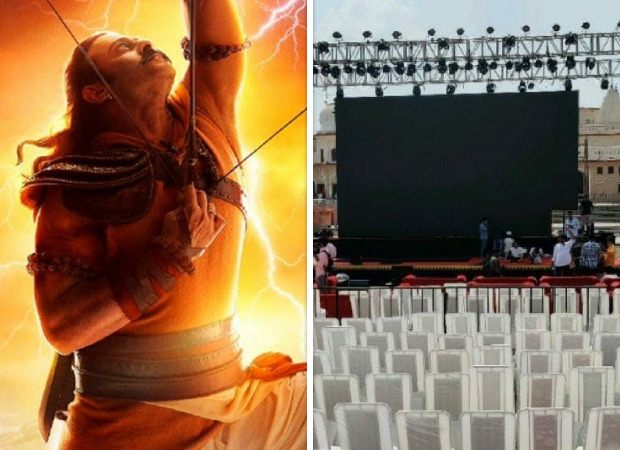 Prominent journalists of media from Mumbai and Delhi have reached Ayodhya, Uttar Pradesh for the poster and teaser launch of one of the most awaited films of 2023, Adipurush. Bollywood Hungama, too, has arrived at the holy town and looking at the arrangements, it seems like the event is going to be a highly memorable one.

BREAKING: 50 feet HUGE poster of Adipurush to be unveiled at Ayodhya; 10,000 fans expected at the event; 250 policemen deployed

The main event will be held today, that is, Sunday, October 2, at Ayodhya’s Ram Ki Paidi Ghat. The poster and teaser will be unveiled at 7:11 PM in the presence of Prabhas, Kriti Sanon, director Om Raut and producer Bhushan Kumar. The District Magistrate, Superintendent of Police are also expected.

The media was taken to the venue in the afternoon and got some interesting information about how the event will unfold.

A source told Bollywood Hungama, “The team of the film will walk from a specially constructed bridge on the River Sarayu. They’ll come on the stage after which a giant poster of the film, which is 50 feet in size, will be unveiled. Then on a screen, the teaser will be shown. Interestingly, the promo will be played in all the five versions – Hindi, Telugu, Tamil, Kannada and Malayalam – one after another.”

The source reveals that a first look event of this scale has never happened before for a film in India. The source stated, “Around 10,000 people are expected to witness the event. 250 policemen and 200 bouncers have been deployed. We are confident that this event will be talked about and will be remembered for years to come.”

Meanwhile, the residents of Ayodhya are on cloud nine and one can feel the excitement in the air. The source signed off by saying, “The local population can’t wait to witness the spectacle. Prabhas is a favourite actor here obviously due to Baahubali series and they can’t believe that he’s going to make his presence felt in their town in a few hours.”

Stay tuned to Bollywood Hungama as we shall report interesting details from this event, live from Ayodhya.

Also Read: Adipurush’s teaser to be launched at 7:11 pm on October 2 at Ayodhya by Prabhas, Kriti Sanon, Om Raut and Bhushan Kumar