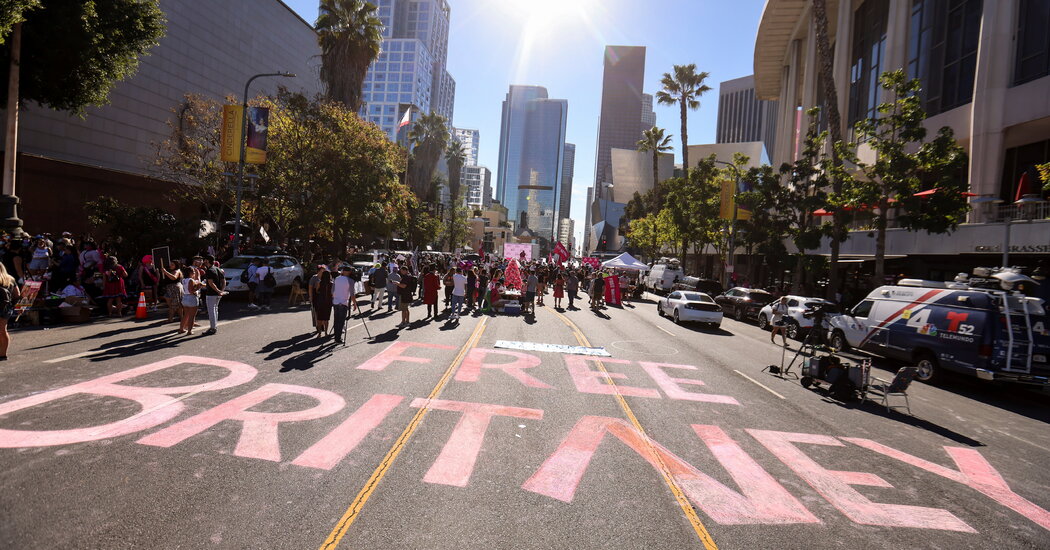 A lawyer for Britney Spears, in an effort to thwart her fatherâ€™s demand that she pay his legal bills, claimed in court papers filed on Tuesday that her father and others involved with her conservatorship had committed myriad financial improprieties over several years.

Among the many accusations in the filing was a claim that Ms. Spearsâ€™s father, James P. Spears, paid almost $6 million from her estate to a security firm that somehow obtained private phone records for Ms. Spearsâ€™s mother and others and obtained GPS â€œping dataâ€ to track the locations of people close to Ms. Spears.

Mr. Spears, known as Jamie, was in charge of the conservatorship for most of its nearly 14-year existence, until a judge terminated the legal arrangement in November in the wake of public pleas by Britney Spears and news media reports about possible wrongdoing. Mr. Spears, who had been suspended as conservator of his daughterâ€™s estate in September, subsequently requested that his legal fees be paid for by Ms. Spears. His lawyer, Alex M. Weingarten, charges $1,200 an hour, according to a court filing.

The requests for Mr. Spearsâ€™s and other legal fees charged during the conservatorship are expected to be discussed at a Los Angeles court hearing on Wednesday.

In his petition, Mr. Spearsâ€™s lawyer argued that the singerâ€™s estate should pay for his legal expenses in order to ensure the conservatorship is closed out properly and because Mr. Spears had engaged in no wrongdoing.

In response, Ms. Spearsâ€™s lawyer said in the filing that the court should reject Mr. Spearsâ€™s demands because â€œthe allegations of misconduct against him are specific, credible and serious, ranging from abuse to conflicts of interest, financial mismanagement and corruption of the conservatorship to implicating state and federal criminal law.â€

The lawyer, Mathew S. Rosengart, cited several revelations about the handling of the conservatorship that were first reported by The New York Times as well as new findings detailed by Sherine Ebadi, an investigator at Kroll and a former F.B.I. agent retained by Ms. Spearsâ€™s legal team to investigate Mr. Spearsâ€™s management of the estate.

Lawyers for Mr. Spears and Ms. Spears did not immediately respond to requests for comment.

A declaration by Ms. Ebadi detailed her corroboration of allegations first reported by The Times about how Mr. Spears and the firm Black Box Security monitored Ms. Spearsâ€™s phone, including her communications with her lawyer, and secretly recorded her in her bedroom.

The declaration by Ms. Ebadi in the court filing said that she had interviewed the former Black Box employee Alex Vlasov, and that he described how Black Box allegedly obtained private phone records for Ms. Spearsâ€™s mother and others to determine if they were speaking to the news media. He also told Ms. Ebadi, according to the filing, that Black Box would obtain GPS â€œping dataâ€ to obtain the locations of certain people, such as former boyfriends, for surveillance.

It was unclear how the security firm might have obtained this information. The declaration notes that these methods are typically available only to law enforcement authorities via a court order.

The declaration also alleges that Mr. Spears asked Black Box to send him his daughterâ€™s â€œtherapy notesâ€ from her iCloud account, despite being aware that he was expressly prohibited from reviewing them without Ms. Spearsâ€™s permission.

According to the court filing, Krollâ€™s investigation has identified several instances in which Mr. Spears engaged in financial misconduct, self-dealing and mismanagement as conservator.

The filing claimed Mr. Spears engaged in self-dealing as conservator when he sold Ms. Spearsâ€™s childhood home to himself. It also said Mr. Spears had paid for his living expenses with his daughterâ€™s funds, including close to $9,000 paid to Advanced Multimedia Partners, a business entity owned by James P. Watson III, the husband of Mr. Spearsâ€™s daughter Jamie Lynn Spears.

Ms. Ebadi also notes that Mr. Spears paid costs of $1.5 million related to upkeep of Ms. Spearsâ€™s property in Louisiana â€” two to three times the value of the house â€” and evaded a question raised by the court as to the â€œextraordinarily high expenses.â€ She stated that more than $178,000 of the $1.5 million spent on the Louisiana residence was paid to Advanced Multimedia Partners.

The filing alleges that the estate, at times, paid for improper legal fees for others, including expenses related to Ms. Taylor, and an episode involving a domestic violence restraining order filed against Mr. Spears that barred him from contact with Ms. Spearsâ€™s children.

The court papers state that over the course of the conservatorship, Mr. Spears approved the payment of more than $30 million in fees to dozens of law firms, â€œincluding large payments for evidently small matters, as well as significant overlap in work performed.â€

Lawyers for Tri Star and Black Box Security did not immediately respond to requests for comment. Previously, a lawyer for Black Box said the firmâ€™s officials â€œhave always conducted themselves within professional, ethical and legal bounds,â€ and a lawyer for Tri Star said the company â€œfaithfully served the estate.â€