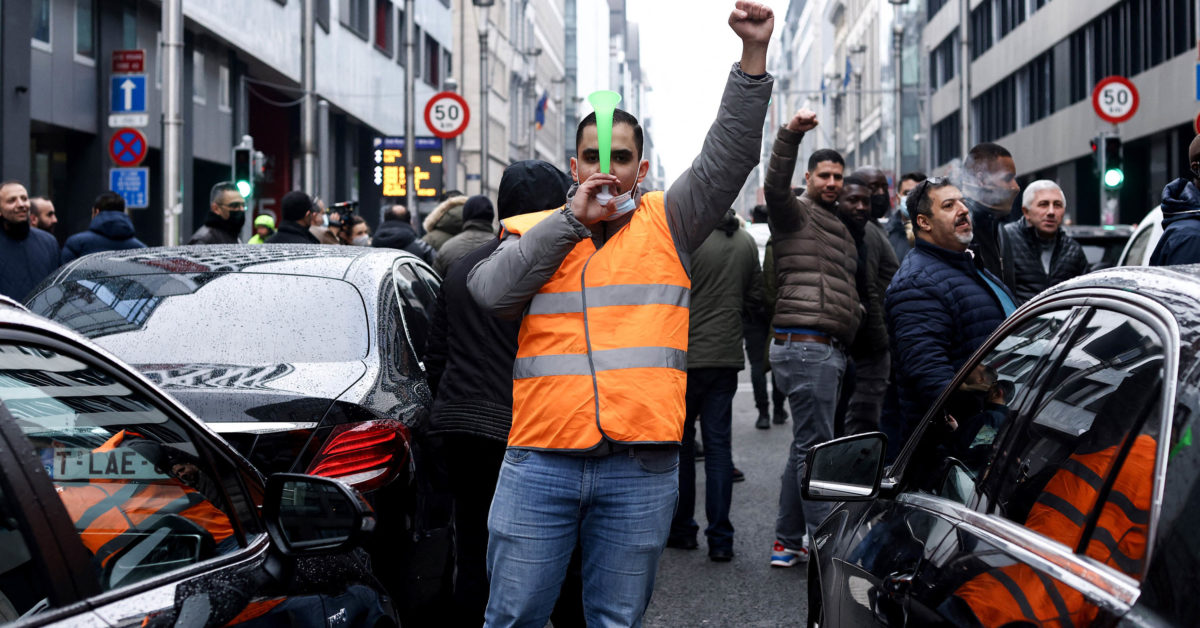 Hours after a court ordered some 2,000 Uber drivers off the EU capital’s streets, local government officials announced they had reached a deal on a long-delayed reform of taxi and private car law. The Brussels government also said it was searching for a “temporary solution” to get Uber cars driving again after the company announced they would stop working from 6 p.m. on Friday, to comply with the court order.

“The government looks, awaiting the approval of the reform, actively for a temporary solution for the situation created by the order and the attitude of Uber,” it said in a press release.

The comments amount to a first concession in a battle that has pitted California-based Uber against local government in Brussels for years and culminated in Wednesday’s announcement of a de facto ban on the service. Reform is needed, as taxi and private car law dates from 1995, long before smartphones and apps like Uber were introduced.

Rudi Vervoort, the Brussels minister-president who is also in charge of its taxi services and has led the charge against Uber, showed his opinion of Uber when announcing the concession, saying that the company had “misled” drivers about the risk of a ban.

The concession came together as Uber ramped up a multi-pronged campaign to mobilize public opinion online and offline, while appearing to support protest actions carried out by app-based drivers.

Hundreds of drivers, whose Brussels licenses the court ruling had effectively rendered illegal, blocked major thoroughfares across Brussels, snarling traffic on a key thoroughfare road leading to the European Commission and Council, and gathering near Vervoort’s office.

“The minister has promised us that there would be a taxi plan as of July, then it was September, we still have no news yet,” said a driver who only gave his first name, Mohamed, as he protested with his car Thursday on Rue de la Loi near the EU institutions.

While Uber hasn’t officially backed the protests, it is nonetheless aligned with three drivers’ associations that sponsored road-blocking demonstrations in Brussels.

As drivers brought the dispute into the streets, Uber made sure to bring it to users’ attention — by sending an email that invited them to sign a petition, which was started by Uber and the three drivers’ associations, denouncing the court decision. By Friday afternoon, the petition had tallied more than 17,000 signatures.

On social media, influencers battered the local government over its alleged failure to bring mobility into the 21st century, while a local online newspaper ran a feature about women who said Uber had made them feel more secure when getting around the city.

It didn’t hurt Uber’s cause that some parties in the coalition that rules Brussels were also unhappy with the slow pace of taxi reform.

“It’s unthinkable that Europe’s capital no longer can use Uber,” tweeted Egbert Lachaert, president of the Flemish liberal party Open VLD, which is part of the Brussels coalition. “This platform gives work to a lot of drivers working as self-employed. This is robbery. The Brussels government must look for a solution as soon as possible.”

In an unusual twist, even the taxi industry seemed to side with Uber over the reform.

“The sector is aware that there’s a need for reform,” Pierre Steenbergen, secretary general of the national taxi federation GTL told POLITICO, adding that out-of-work Uber drivers can apply for jobs at Brussels taxi firms. Reform, however, means that Uber should also give in to demands it will not like, he said — like data-sharing with authorities.

Out on the streets, Uber drivers said they had no plans to let up the pressure on Vervoort’s government — and were not too impressed with promises of a temporary solution.

“We continue,” said Fernando Redondo, president of one of the riders’ associations, when asked about the protests going on.