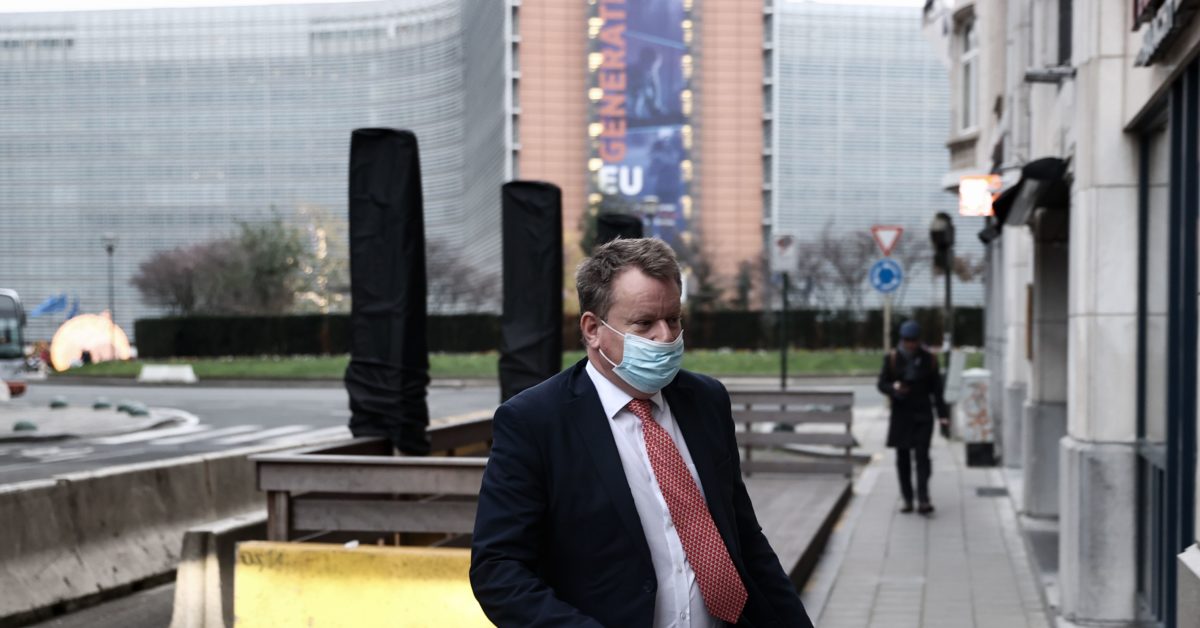 The U.K. is pushing for a big Brexit reset â€” but don’t expect Brussels to shelve its summer plans.

Britain’s David Frost spelled out his latest bid to overhaul the divorce deal’s Northern Ireland protocol Wednesday. Yet while there was tough talk from the U.K., the EU’s response amounted to a polite: “Fine, we’ll talk, but we’re not reopening the deal.”

The Commission sent one of its vice-presidents to deliver its reply on a public holiday in Belgium just days before the European Parliament enters its summer recess.

“We take note of the statement made by Lord Frost today,” MaroÅ¡ Å efÄoviÄ, the Commission’s point person on BrexitÂ said in a statement. The EU is ready to “continue to seek creative solutions” on trade between Britain and Northern Ireland, he added, but “will not agree to a renegotiation of the protocol.”

It could not have contrasted more with the stark message delivered in London earlier, where Frost toyed with (but ultimately stopped short of) triggering a key clause to over-ride parts of the agreement. He told lawmakers: “We cannot go on as we are.”

Northern Ireland remains a fraught topic as the two sides get used to life apart.

Both Brussels and London agreed to the protocol in last year’s Brexit deal as a way to avoid enforcement of the EU’s single market rules at the politically-sensitive border between Northern Ireland and the Republic of Ireland.

Instead, checks are required on goods moving between Northern Ireland and the rest of the United Kingdom, a set up that has deeply angered unionist parties in Northern Ireland and prompted complaints from the U.K. government about what it sees as needless business burdens for goods that are staying within the country.

The EU has in turn been frustrated by the U.K.’s move to unilaterally waive the enforcement of some checks earlier this year, and began legal action to make its point crystal clear.

Policy experts in London said Britain’s latest requests â€” coming just weeks after a showdown over chilled meats was (temporarily) resolved â€” are its most drastic yet.

“We are looking at a much more wholesale renegotiation, of at least the trade parts of the protocol, than I think even the Johnson government proposed back in 2019,” Maddy Thimont Jack, associate director at the Institute for Government think tank, said of the 28-page command paper setting out the U.K. position.

The U.K. wants to remove customs checks on goods which registered businesses say are bound for Northern Ireland as their final destination, and is looking to get rid of certificates and checks for food products “only ever intended to be consumed in Northern Ireland.”

For animal and plant health checks, the U.K. says it could apply EU law for goods going to Ireland and use “risk-based and intelligence-led controls” on consignments going to Northern Ireland.

On medicines, the U.K. argues that “simplest way forward may be to remove all medicines from the scope of the protocol entirely.”

It’s suggesting “appropriate labelling requirements” for U.K.-only products, and increased surveillance with penalties for traders who do not comply.

Yet Raoul Ruparel, a Brexit adviser in Theresa May’s government, said proposals to allow firms to declare the final destination of their goods had “been around since 2017 and 2018” and “been aired at various points” â€” including in an article he wrote for POLITICO way back in 2019. But these ideas were never formally put forward as an option by Johnson and Frost.

“It’s not totally unreasonable, it’s just quite late in the day to be promoting it when it’s been knocking around for a while,” he said.

Frost’s big ask, and big threat â€” to unilaterally override the agreement unless the EU agreed to new rules â€”Â barely registered in Brussels, however, where many officials are already on summer holidays, and others were enjoying a day off in the sun as Belgium celebrated national day with a parade and a fries-themed tramway.

Commission President Ursula von der Leyen was working, but didn’t respond to London’s latest Brexit request. Instead, she tweeted about the EU’s mammoth recovery fund and a deal to produce vaccines in Africa with EU support.

The Irish government often feels it must be seen publicly to split the difference between London and Brussels. That’s because its economic interests require keeping relations calm and professional with Britain, Irelandâ€™s top market for its agrifood exports.

Senior Irish government officials, speaking on condition of anonymity because they were not authorized to speak on the record, said they would not object if the two sides agree on protocol-bending rules and systems â€” so long as the result keeps U.K.-EU border enforcement in the Northern Irish ports of Belfast and Larne, not on their stateâ€™s smuggler-friendly 500-kilometer frontier with Northern Ireland.

â€œFor us, any agreement that avoids the legal nightmare of placing controls on the movement of goods and people on potentially hundreds of border crossings will be a good outcome,â€ one official said.

These officials express a common view that the European Commission and Å efÄoviÄ are demonstrating the patience of Job in dealing with a needlessly arrogant and destructive British government. But they also have some sympathy with London and see room for Brussels to concede common-sense ground in coming weeks.

â€œIt can be, to say the least, deeply frustrating to see certain British ministers complain of the unforeseen consequences of Brexit, when many of the trade problems weâ€™re experiencing now were plain as the nose on your face from miles away,â€ one official said.

â€œNonetheless, we also donâ€™t see any need to punish Northern Irelandâ€™s retail economy as the most rigid enforcement of an â€˜Irish Sea borderâ€™ would do. The EUâ€™s border controls with third-party countries arenâ€™t really built for shipping mixed retail loads from English distribution centers a few hundred miles to Belfast supermarkets,â€ the same official added.

â€œWe do expect the Commission will try to meet the British halfway on this key point. It would foster an atmosphere of compromise if the British could just stop being so disingenuous and, frankly, irritating at every turn.â€Â

Another official said that while Ireland is doing all it can to expand its markets in continental Europe, of Irelandâ€™s â‚¬14.3 billion in agrifood exports last year, â‚¬4.3 billion went to Britain. The Irish are keen to keep that farm produce flowing to English supermarkets once the introduction of British controls on EU imports begins in October.Â

â€œGiven our geography and trading relations, we have no choice but to work as constructively as we can with the British government and keep the economic damage wrought by Brexit to a minimum,â€ the official said.

Thimont Jack thinks the U.K. has a “valid point” when it argues that Northern Ireland represents only a relatively small part of the EU’s single market, with few of its goods likely to pose a “real risk” to the market, and sees scope for the EU to move on ensuring enforcement of the protocol is “a bit more proportionate.”

Yet Britain’s latest plan does not, she noted, contain “a huge amount of detail about what exactly it is the government is proposing.” While the document includes “a lot of talk” about data-sharing and strong penalties for smugglers, it’s not clear “exactly what that looks like” or whether the U.K. has “anything more substantial sitting beneath these proposals that we haven’t seen,” Thimont Jack added.

The U.K. also wants to see a â€œstandstill periodâ€ on incoming checks while negotiations take place. Frost proposed maintaining current grace periods, and urged the EU to freeze its planned legal action against the U.K.Â to give “room to negotiate and provide a genuine signal of good intent to find ways forward.”

Thimont Jack is not convinced that’ll get much of a hearing in Brussels as it heads for a summer break.

“I think it’s a valid point that treaties can be renegotiated,” she said. “But at this stage the U.K. hasn’t actually shown a commitment to fulfilling the international obligations it’s already made. I think there isn’t really the trust at this stage to revisit these arrangements entirely.”