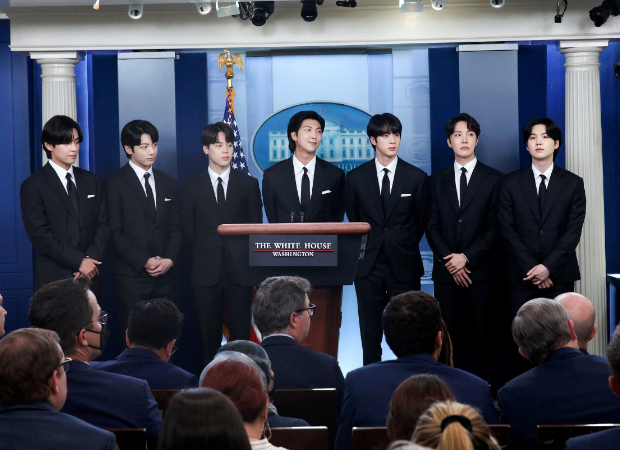 South Korean juggernaut BTS visited the White House (Oval Office) on Tuesday to discuss diversity and other related issues with President of the United States Joe Biden. During the 35-minute meeting, the septet and President Biden had a conversation on anti-Asian hate crimes and Asian inclusion and spoke about President Biden’s recent visit to South Korea.

President Biden began the conversation by speaking about discrimination and the recent rise in anti-Asian hate crimes. President Biden explained, “Hate only hides. When good people talk about it and say how bad it is, it goes down.”

Thanks for having us at the White House! It was a huge honor to discuss important issues with @POTUS today. We’re very grateful for #BTSARMY who made it all possible.🫰💜
#BTS #방탄소년단 #BTSatTheWhiteHouse pic.twitter.com/PZd8Ox2Kea

President Biden said, “People care a lot about what you say, and what you are doing is good for all people.” He added, “It’s not just your good talent. It’s the message you are communicating. It matters.”

BTS said, “We want to say thank you, sincerely, for your decision such as signing the COVID-19 Hate Crimes Act into law,” and added, “So we just want to be a little help and we truly appreciate the White House and government’s (efforts) trying to find solutions.”

At the end of the meeting, President Biden gave commemorative coins as gifts.

Before joining President Biden, BTS paid a visit to the White House Press Briefing Room to address their purpose and feelings about the visit in front of approximately 100 journalists. White House Press Secretary Karine Jean-Pierre said, “I’m excited to welcome some special guests to the briefing room today, pop phenoms BTS.” She added, that BTS are “Grammy-nominated international icons,” and “play an important role as youth ambassadors promoting a message of respect and positivity.”

It was great to meet with you, @bts_bighit. Thanks for all you’re doing to raise awareness around the rise in anti-Asian hate crimes and discrimination.

I look forward to sharing more of our conversation soon. pic.twitter.com/LnczTpT2aL

Then, the members made their remarks in Korean or English. RM said, “It is a great honor to be invited to the White House today to discuss important issues of anti-Asian hate crimes, Asian inclusion and diversity.”

Speaking in Korean, Jin said, “Today is the last day of AANHPI Heritage Month. We joined the White House to stand with the AANHPI community and to celebrate.” Adding to that, SUGA said, “It’s not wrong to be different. Equality begins with opening up and embracing all differences.”

Thanking their massive fandom ARMY, j-hope further said, “We could be here today thanks to ARMY, our fans worldwide who have different nationalities and cultures and use different languages. We are truly grateful.”

Furthermore, Jimin talked about the surge in anti-Asian hate crimes, adding, “We were devastated by the recent surge of hate crimes including anti-Asian hate crimes. To put a stop to this and support the cause, we’d like to take this opportunity to voice ourselves once again.” V said, “Everyone has his or her own history. We hope today is one step forward to respecting and understanding each and everyone as a valuable person.”

Jung Kook added, “We still feel surprised that music created by South Korean artists reaches many people worldwide, transcending barriers across the board including language and culture. We believe music is always a wonderful unifier of all things.”

Ending their briefing, the group’s leader RM said, “Lastly, we thank President Biden and the White House for giving us this important opportunity to speak about the important causes and remind ourselves of what we can do as artists. Thank you very much.”

Back in March 2021, BTS strongly condemned Anti-Asian hate and even talked about facing racism. “We send our deepest condolences to those who have lost their loved ones. We feel grief and anger,” the statement read. “We recall moments when we faced discrimination as Asians. We have endured expletives without reason and were mocked for the way we look. We were even asked why Asians spoke in English. We cannot put into words the pain of becoming the subject of hatred and violence for such a reason. Our own experiences are inconsequential compared to the events that have occurred over the past few weeks. But these experiences were enough to make us feel powerless and chip away our self-esteem,” BTS further spoke about facing racism and being subjected to the discrimination they’ve faced over the years.”

“What is happening right now cannot be dissociated from our identity as Asians. It required considerable time for us to discuss this carefully and we contemplated deeply on how we should voice our message. But what our voice must convey is clear,” the message further read.

Standing in solidarity with their Asian community and condemning the violence, BTS concluded their statement by saying, “We stand against racial discrimination. We condemn violence. You, I and we all have the right to be respected. We will stand together.”

ALSO READ: BTS breaks record for Biggest Show of the Year on Apple Music with debut episode of BTS Radio