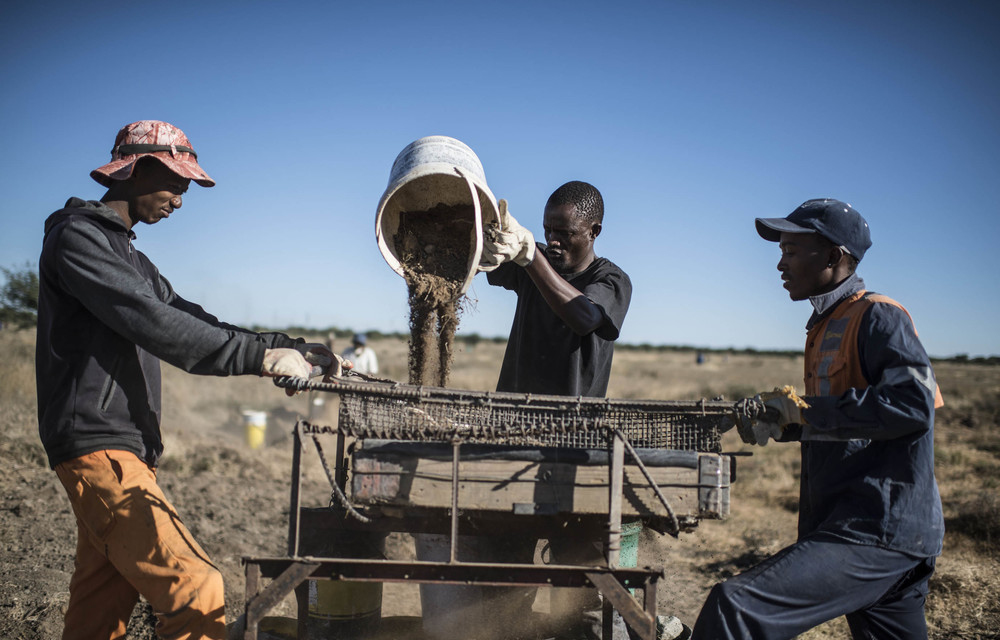 Neal Froneman, chief executive of Sibanye-Stillwater, recently called for action against zama zamas, artisanal miners who exploit shafts that have been abandoned by mining companies. ‘We should declare a state of emergency and should involve the military’, he said.

We might begin by recognizing that the people living around Sibanye-Stillwater’s operations already live under conditions comparable to war. For example, for Rustenburg in the Western Limb of the Bushveld Igneous Complex — the mines of which extract 50% of the platinum produced in the world, and 65% of South Africa’s platinum group metals — South African Police Service data shows a murder rate in 2016 of roughly 36 per 100000 population.

This violent death rate — including not only high levels of armed robbery and domestic violence, but also intergroup conflict, gang violence, vigilantism, and murders by the police — is comparable to South Sudan, and higher than Colombia, the Central African Republic, and Yemen, all countries experiencing armed conflict.

This downward spiral into war-zone levels of violence — in which companies like Sibanye-Stillwater still make breathtaking profits — is to a large extent a post-apartheid phenomenon. South African platinum production doubled from 100 metric tonnes in 1995 to roughly 200 metric tonnes in 2017.

The benefits have flowed largely to business, while the social ills in terms of HIV/Aids and TB, and the lack of access to basic services continue to fall on the poor and marginalised, and corrupt arrangements leave many workers in conditions of near slavery — unable to meet even basic needs for food and shelter. The South African Human Rights Commission has emphasised this continuity in mining and its political economy of extraction and impunity from the apartheid era to the present.

In this context, Froneman fails to recognise the company’s own role in contributing to longstanding challenges. Mining fundamentally alters the communities in which it operates. Sibanye-Stillwater’s projects drive migration to the region and its ensuing pressures on land, water, housing and public services.

This has not been accompanied by commensurate increases in governance capacity or public service provision. These dynamics obtain even before taking into account the legacies of imperialism, colonialism, and apartheid with which the history of mining in South Africa is inexorably linked.

Meanwhile, Lonmin, one of the legacy companies that comprise today’s Sibanye-Stillwater, has been implicated in transfer mispricing that allowed it to claim that hundreds of millions of rand in profits were somehow management fees or royalties that in fact exist solely for the purposes of tax avoidance.

Froneman has not made clear how and when Sibanye-Stillwater intends to restate these accounts and pay amounts due to the South African government — amounts that could well contribute towards addressing the ills that Froneman himself recounts: “People are poor, people are angry, and, of course, there is a lack of capacity to deliver services.”

Nor does Froneman recognise the company’s responsibilities for solutions. International standards — such as the Performance Standards of the International Finance Corporation, and those of the International Council on Mining & Metals and the United Nations Global Compact, of which Sibanye-Stillwater is a member — make clear that a mining company is responsible for the direct, indirect, and cumulative impacts of its presence and operations.

These standards specifically state that issues such as in-migration to mining areas and the development of a sufficient local capacity to address heightened social, political, and economic challenges cannot be left to the government alone, but are a shared responsibility of the company. Furthermore, the company’s responsibilities continue until the problems of which it is part are effectively solved.

It is unclear how Sibanye-Stillwater can be silent on its own shortcomings with respect to these realities and its obligations, and at the same time claim to “create and share superior value for all stakeholders” as it declares war on some of the most desperate.

What is clear is that the militarisation of the response to zama zamas in the platinum belt that Froneman calls for can only make the situation worse. Across the continent — from Mali to Mozambique — military-first strategies have failed to achieve their goals. Rather, they tend to further alienate citizens who are already “marginalized, receive limited or no government services, and often suffer from systemic inequality and pervasive state corruption”.

Unless and until these root causes are addressed, young people will be drawn to gangs and other forms of violent extremism to address their feelings of powerlessness; and small-scale miners will take their chances in mineshafts that have lost value to Sibanye-Stillwater but represent in this case more than the proverbial “pot of gold” (or platinum) for people with few other choices.

So, rather than advocating an approach evocative of the militarised response of the London and Rhodesian Mining and Land Company Limited (the later Lonmin) against the peoples of Southern Africa, or PW Botha’s “total onslaught” strategy against the opponents of apartheid, what might Froneman rather do to honour the International Day of Non-Violence?

Together with stakeholders, Froneman could engage in a careful study of how the people around Sibanye-Stillwater’s operations live — for example, Statistics South Africa’s 2020 data show that the unemployment rate for Bojanala is 48.7% and the Gini Coefficient .62; fewer than 20% of homes are connected to running water, and fewer than a third of adults have finished high school — and acknowledge that they already live the “state of emergency” he calls for.

Pointedly, he might acknowledge that the rapes that he instrumentalised in his call for military intervention against the zama zamas are a daily occurrence for the women and girls of the region — and would not be addressed in the least by his self-serving proposal.

Then, Froneman might expand Sibanye-Stillwater’s Marikana Renewal programme “to acknowledge the pain and engage on the process of healing” beyond the Marikana massacre to the entire sordid history of mining in South Africa: its theft of land, its use of forced labour, its destruction of the family unit, and its indifference to the creation of untenable conditions for communities and governments alike.

This could be followed by a careful accounting of the reparations due from Sibanye-Stillwater (as a successor in interest to a variety of mining houses) to the people of the platinum belt and to South Africa more generally, taking into account both the recommendations of the Truth and Reconciliation Commission for corporate reparation and restitution, and contemporary standards including the Guiding Principle on Business and Human Rights “ensuring that outcomes and remedies accord with internationally recognised human rights”.

Once Sibanye-Stillwater has cleaned up its own side of the street, Froneman may be in a better position to advocate for better behaviour by others. In doing so, he can explore peacebuilding approaches to private sector development that have proven far more effective than their violent alternatives. These contextualize conflict and violence within their full systems perspective, working to change the system rather than suppress its symptoms.

Instead of advocating for the escalation of violence, Froneman would then be working, in the words of the UN resolution establishing the International Day of Non-Violence, “to secure a culture of peace, tolerance, understanding and non-violence” in and beyond the platinum belt.

These reflections for Froneman have urgency. Looking at the long struggle for a free South Africa, we cannot be sure whether we are in the 1970s or 1980s of turbulent and increasingly violent contestation over economic transformation; and we are still waiting to see whether in the contemporary version of 1990 some few business leaders will finally come on board to help to facilitate fundamental change to the economy in which zama zamas are merely a symptom, and to which militarised responses can only have the same effect terrible effect they did when applied by the apartheid government.

Unfortunately, listening to Froneman, words by business leaders from the most violent period of South Africa’s democratic transition ring true. Murray Hofmeyr, chairman of the Consultative Business Movement, stated in 1990 that “the political transformation which is about to take place will not be successful unless it is accompanied by an equivalent transformation of the economy”.

However, Eddie Cross, chief executive of the Beira Corridor Group, had to note that: “I look at South African managers and I have to warn you that I see no signals of you responding and understanding the role that you have to play. There will be no business as usual. You will either have to decide whether you want to acknowledge the forces of the future and willingly become part of it or be overwhelmed by them.”

So, Mr Froneman, as you call for a violent response to zama zamas that can only take the country down roads better left behind, let us end with the reflections by TN Chapman and MB Hofmeyr to the Harvard Business School Club of South Africa in 1994: “What is lacking is not intelligent people, but courageous ones”. This includes the courage to see that, “[t]here comes a time when the old heart has to be plucked out in its entirety and replaced by the new”.

On this International Day of Non-Violence, Mr Froneman, have the courage to eschew self-serving and short-sighted calls for violence, and rather acknowledge and lead change to the very heart of mining, conflict, and violence in South Africa.

Professor Brian Ganson heads the Centre on Conflict & Collaboration at Stellenbosch Business School. ​​The views expressed are those of the author and do not necessarily reflect the official policy or position of the Mail & Guardian.