Calls grow for China and India to talk sense into Putin 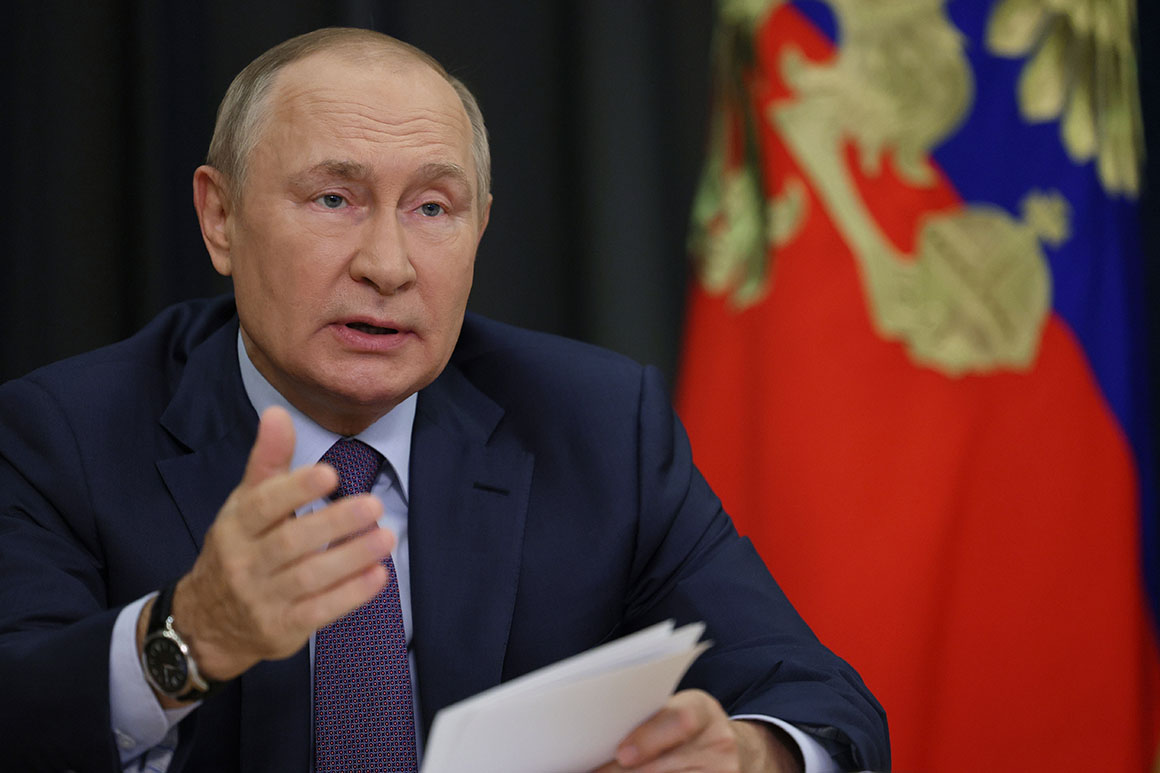 “They should do it. I hope they would,” added the official, who like others interviewed for this article asked not to be identified in order to discuss internal deliberations.

A senior State Department official said that U.S. diplomats have been pressing Russia’s regional friends and foes alike to pressure Putin not to go the nuclear route.

“We’d made the point in a number of conversations with countries in the Indo-Pacific region — ally, partner, or otherwise — of the importance of speaking with one voice against the use of nuclear weapons in Ukraine,” the official said, without specifying whether the U.S. was leaning on China and India. “Every country has a responsibility to lend its voice.”

The Biden administration, meanwhile, is scrambling to get the United Nations to take action against Russia. One way could involve bypassing the U.N. Security Council, where Russia has a veto, to adopt a resolution that would condemn Moscow’s plans to annex large parts of eastern Ukraine and call on Russia to withdraw all its troops, U.S. officials said.

Officials are considering using an obscure provision in the UN charter, a move the governing body also used in 1950, after the North Korean attack on South Korea. North Korea’s attack was backed by China and Russia — both veto-wielding Security Council members.

But U.S. officials believe one of the most promising ways to change Putin’s mind is to lean on Chinese President Xi Jinping and Indian Prime Minister Narendra Modi, a pair of world leaders who are believed to have significant sway over Putin, according to current and former officials in the U.S. and Europe.

China has not publicly criticized its ally and has continued its military cooperation with Moscow since the February invasion of Ukraine. Following the economic sanctions levied on Russia, China also became an even bigger market for Russian goods, particularly energy supplies.

But it has also not signed any major economic deals with Moscow since the invasion, as expected. And Putin himself hinted at growing concerns from Beijing about Russia’s invasion at a meeting of heads of state at the Shanghai Cooperation Organisation in Uzbekistan this month.

“We highly appreciate the balanced position of our Chinese friends in connection with the Ukrainian crisis,” Putin said. “We understand your questions and concerns in this regard.”

Xi in particular is seen as a potentially powerful voice in helping defuse the crisis from escalating further.

“[Putin] and Xi have this unbounded friendship, right?” said Rose Gottemoeller, a former deputy secretary general of NATO who has negotiated with Putin, noting the two leaders’ warm relations in recent years. “He should be listening to his friend right now.”

That also goes for Modi, a closer democratic ally to Washington than his Chinese counterpart, who expressed public displeasure at Putin’s actions in Ukraine at the meeting in Uzbekistan.

And last week, India’s foreign minister, S. Jaishankar, expressed renewed concern about the situation in Ukraine, singling out the threat of nuclear weapons.

“The trajectory of the Ukraine conflict is a matter of profound concern for the entire international community,” he said at the UN. “The future outlook appears even more disturbing. The nuclear issue is of particular anxiety.”

Gottemoeller, a professor at Stanford University who remains in close touch with American and foreign diplomats, said, “I believe that they are also sending deterrence messages to Putin as well.”

“That, I hope, will be effective,” she added.

The White House and State Department declined to comment on any efforts to encourage China or India to lean harder on Russia.

Informal conversations intensified on Wednesday, as dozens of U.S., European and Russian arms control experts and former government officials held a private call to cobble together a solid international front.

“There continue to be multiple Track II conversations,” said Daryl Kimball, executive director of the Arms Control Association, referring to nonofficial talks conducted with the knowledge of representatives’ foreign ministries.

Putin and other top Russian officials have issued new — and increasingly bellicose — threats in recent days that Russia would consider using nuclear weapons if it felt threatened by what it claims is an effort by the United States and NATO to use Ukraine to attack Russia.

That prompted the Biden administration to warn of “catastrophic consequences” should Moscow cross the nuclear threshold.

The White House remains on alert about Putin’s nuclear threats but has seen no evidence that Russia has taken actions that indicate it plans to use nuclear arms, White House and Defense Department officials have insisted this week.

U.S. intelligence also does not anticipate that posture will change after the announcement of the referendum results on Friday, according to the officials.

The U.S. believes that Putin knows that his war effort is faltering and knows that he is facing pressure at home. The signs of chaos and protest stemming from the call-up of military reservists last week will only add to that — and make it impossible for Putin to obscure the failures of the war from the Russian people.

As a result, there is “universal concern about the unprecedented nature of the nuclear threat we’re facing,” said Kimball, who participated in the private call among Western and Russian nuclear experts on Wednesday. “We’re trying to figure out how we can respond privately and publicly.”

He sees a growing role of global leaders to “reinforce Biden’s caution against Putin’s flirtations with nuclear weapons use,” he added.

“They should underscore why everyone loses, especially Russia, if Putin breaks the 77-year-long taboo against using nuclear weapons,” he added.

The Biden administration is also trying to rally the United Nations to put new diplomatic pressure on Putin by devising ways to get a proposed resolution on Ukraine through the world body while avoiding a Russian veto at the U.N. Security Council.

“If Russia uses its veto to shield itself from accountability, we will then look to the UN General Assembly to send an unmistakable message to Moscow,” Linda Thomas-Greenfield, the American ambassador to the United Nations, said on Tuesday after a briefing on the Ukraine situation.

One possible avenue is known as a “Uniting for Peace” resolution, used in 1950, that could bypass gridlock inside the Security Council, people familiar with the issue said.

Kimball said he believes that provision would also be an option for the world body to respond forcefully if Russia resorted to nuclear weapons, including taking some collective action to respond to the damage.

Gottemoeller contends one of the strongest deterrents to avoiding a detonation in the first place may be that a Russian nuclear attack in Ukraine would also obliterate one of Putin’s primary talking points: that the United States is the only nation to use nuclear weapons in a conflict.

Another U.S. official noted the pariah status that would come with using nuclear weapons.

The person pointed out that “Russia has made nuclear threats on and off throughout the conflict” but has also “intermittently said they would never use a nuclear weapon.”

The official also noted that Putin signed on to a declaration in January with the leaders of the United States, Great Britain, France and China stating that a nuclear war must never be fought and can never be won.

Gottemoeller predicts that Russian use of nuclear weapons would alienate the “Global South,” — South Asia, Latin America and Africa — that have had traditional economic and political ties to Moscow.

“The Russians and Putin himself and his coterie have been very effective at keeping the Global South on his side and going out and saying, ‘Look at what the Americans are doing and their imperial partners like the U.K.’”, she said.

“I do think that breaking the nuclear taboo would lose them the Global South,” she added. “They would become much more isolated than they have been in this crisis. [Putin] needs his customer base in China and in India.”

Graham Allison, a former senior Pentagon official and longtime government adviser on nuclear policy, said that better relations between Washington and Beijing would “make a big difference” but “even in the absence of that, I think there’s an opportunity.”

“If I were working on it,” Allison added. “I would be working that angle as strongly as possible.”