Cannabis Events Come Out of Hiding in New York City 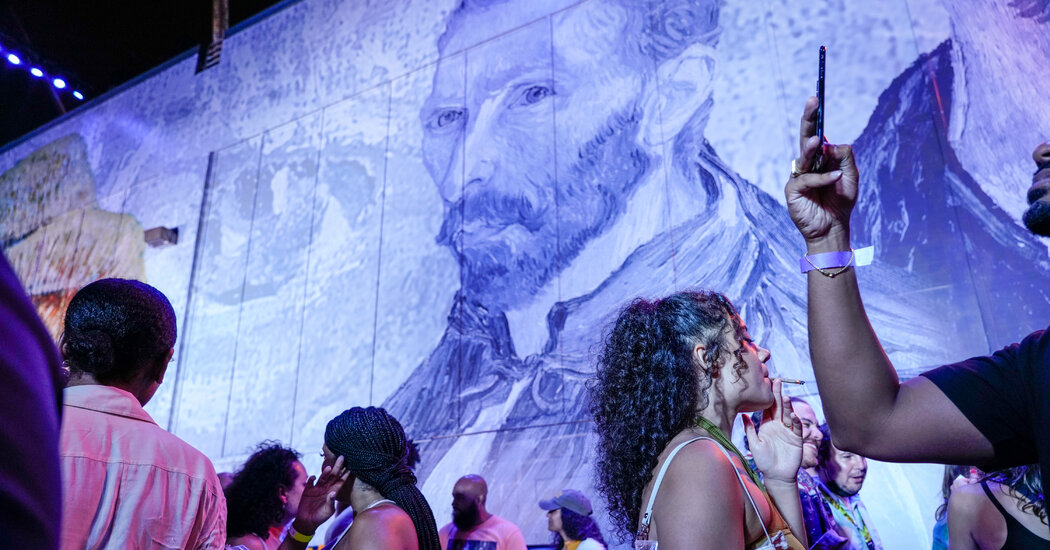 New York may have legalized recreational marijuana in 2021, but the state still has not passed the laws that would allow its sale in stores, or its consumption at club-like lounges â€” moves that would open doors for a potential $4.2 billion industry.

Though licenses and permits are not expected to be issued until later this year, with businesses up and running in 2023, the recreational marijuana industry is already setting down roots, hosting events aimed at educating consumers and drumming up excitement.

In November, the Cannabis World Congress and Business Exposition descended upon the Javits Center. Over the course of three days, vendors showed off goods they hope to one day sell in New York, and attendees spoke about their eagerness to see the stigma of cannabis consumption erased.

Arnaud Dumas de Rauly, a co-founder and the C.E.O. of the Blinc Group, which makes and sells vapes, spoke about the purpose of the event. â€œI think itâ€™s just creating a lot of buzz,â€ he said. â€œBut still, weâ€™re in this middle ground where everythingâ€™s open and people are going to come here to learn about the industry.â€

Once legalization goes into effect, he expects to see new kinds of spaces opening in the city that cater to cannabis users. â€œI would love to see consumption lounges pop up here,â€ Mr. Arnaud said.

Faye Coleman, the C.E.O. of Pure Genesis, a cannabis business with a social mission, attended the expo to showcase her companyâ€™s products and to talk about equity in the industry in terms of agency and access. Historically, Black and Latino people have been arrested and jailed for marijuana-related crimes at far higher rates than white people; for that reason, some cannabis activists say, many have been reluctant to align themselves with cannabis-related businesses, even legal ones.

â€œThose are some of the things that are plaguing diversity, equity and inclusion, and I would say stigma and confusion,â€ Ms. Coleman said.

Hundreds of attendees at the expo participated in conversations about the future of legal cannabis, panels on cultivation techniques, marketing, sustainability, and presentations that provided insight into international markets. All around were indications of what New York City could look like as soon as all the regulations are enacted.

Last summer, a New York City lifestyle brand called Happy Munkey tested the waters for â€œconsumption eventsâ€ with a couple of cannabis-infused nights at the Immersive Van Gogh exhibit at Pier 36, a 75,000-square-foot waterfront space on the Lower East Side of Manhattan.

Masked-up guests, who were instructed to wear all-white outfits, walked into the lobby to view an imaginative 3-D recreation of Vincent Van Goghâ€™s â€œStarry Nightâ€ (which featured about 7,500 painted brushes by the designer David Korins), then made their way through a gallery and into the adroit work and vision of the painter.

There was no marijuana consumption allowed inside the gallery. Outside, however, smoke filled the waterfront air and edibles were consumed.

Technically, no marijuana was sold at the event. But included in the Happy Munkey package, along with the pass for Immersive Van Gogh, were generously packed pre-rolled joints. The event was advertised as â€œB.Y.O.C.â€ â€” â€œbring your own cannabis.â€

Happy Munkeyâ€™s co-founders, Ramon Reyes and Vladimir Bautista â€” who are both from the Dominican Republic and grew up in New York City â€” started the brand five years ago and began hosting cannabis-related events in 2017. After Mr. Reyes traveled to Amsterdam, where he visited several cannabis coffee shops, he told Mr. Bautista he wanted to bring a similar feel and experience to their own city, with a local twist.

â€œNew York is just going to give it that pizazz that we need,â€ he recalled telling his business partner. â€œThat New York touch. That New York fly life.â€

ChantaÃ© Vetrice, a hip-hop and pop artist, attended the Immersive Van Gogh premiere with her boyfriend, Stephen Ship. While there, she joked with the exhibitionâ€™s head of marketing, Keith Hurd, about wanting to view the exhibition under the influence of marijuana. The next day, Mr. Hurd called them and asked: How could they do this as an actual event?

Mr. Ship, who is friends with Mr. Hurd, suggested Ms. Vetrice reach out to the Happy Munkey founders to see if theyâ€™d be interested in collaborating. The company â€” which, in addition to hosting events, sells merchandise and produces multimedia content â€” had already helped her produce a single, â€œElevated.â€

â€œWe set up the meetings with Keith, Vlad and Ramon,â€ Ms. Vetrice said. â€œThey loved the idea and they just went for it. And it was a success.â€

She hopes that further collaborations between arts organizations and cannabis companies are on the way. â€œI think it can bring two separate communities together and kind of destigmatize the use of cannabis,â€ Ms. Vetrice said.

Maria Shclover, a producer of the Immersive Van Gogh exhibition, also expressed enthusiasm for the synergy. â€œHappy Munkey is a minority-owned local business, and we love to support minority owned businesses, because we are first-generation immigrants ourselves,â€ she said. â€œNow that cannabis is legal, this partnership seemed like a very good New York thing to do.â€

Beyond Happy Munkey, which has made its previously invitation-only events open to the public, there are other signs of the New York thatâ€™s to come.

The Astor Club, a members-only cannabis club that opened on the Lower East Side in 2020, already draws a whoâ€™s who of the pot industry insiders. And large events appear to be here to stay: The next Cannabis World Congress and Business Expo will be this summer. And Happy Munkeyâ€™s next cannabis consumption event will be held, fittingly, on April 20.