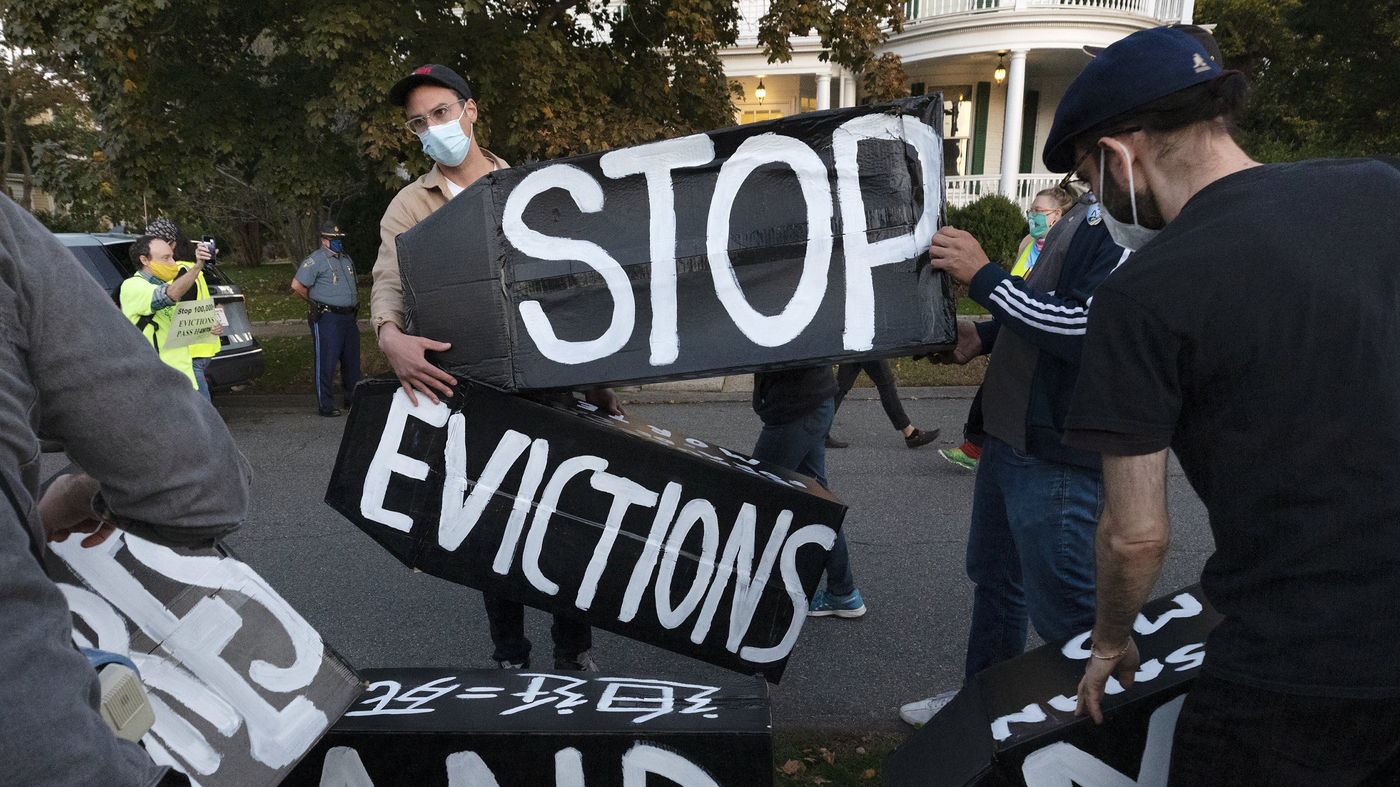 Housing activists erect a sign in front of Massachusetts Gov. Charlie Baker’s house in Swampscott, Mass., on Oct. 14, 2020. The Centers for Disease Control and Prevention has extended a moratorium on evictions until the end of July.

Housing activists erect a sign in front of Massachusetts Gov. Charlie Baker’s house in Swampscott, Mass., on Oct. 14, 2020. The Centers for Disease Control and Prevention has extended a moratorium on evictions until the end of July.

The Centers for Disease Control and Prevention has extended a moratorium on evictions until the end of July. The ban had been set to expire next week, raising concerns that there could be a flood of evictions with some seven million tenants currently behind on their rent.

The Biden administration says the extension is for “one final month” and will allow time for it to take other steps to stabilize housing for those facing eviction and foreclosure. The White House says it is encouraging state and local courts to adopt anti-eviction diversion programs to help delinquent tenants stay housed and avoid legal action.

The federal government will also try to speed up distribution of tens of billions of dollars in emergency rental assistance that’s available but has yet to be spent. In addition, a moratorium on foreclosures involving federally backed mortgages has been extended for “a final month,” until July 31.

In announcing the extension of the eviction moratorium, the CDC said that the COVID-19 “pandemic has presented a historic threat to the nation’s public health. Keeping people in their homes and out of crowded or congregate settings — like homeless shelters — by preventing evictions is a key step in helping to stop the spread of COVID-19.”

The CDC first issued the moratorium last September. It was extended once already in March, until June 30.

But landlords have been pushing back, arguing that they’ve taken a huge financial hit over the past year, losing billions of dollars a month in rent. Several business groups have sued the CDC and won, though court decisions to lift the moratorium have been stayed pending appeal.

The Alabama Association of Realtors, which brought one of the cases, argued that the CDC exceeded its authority in issuing the ban. The group is seeking relief from the U.S. Supreme Court, but the justices have yet to respond.

In its petition, the Realtors association called the CDC’s “continued insistence that public-health concerns necessitate that landlords continue to provide free housing for tenants who have received vaccines (or passed up the chance to get them)…sheer doublespeak.”

Housing advocates have argued that the moratorium is still very much needed. They note that $46 billion in emergency rental assistance approved by Congress has been slow getting into the hands of those it was intended to help. The money is supposed to cover rent that tenants currently owe.

The National Low Income Housing Coalition reports that in some states, less than five percent of the funds have been distributed so far. The group pushed the administration to extend the ban to give states and localities more time to get the money out.

Despite the moratorium, thousands of renters have still faced the threat of eviction because of loopholes in the law. Many are the lowest income tenants and disproportionately people of color. A new study by the Eviction Lab at Princeton University has found that communities with the lowest vaccination rates tend to have the highest eviction filings, raising additional health concerns.

“Allowing the moratorium to expire before vaccination rates increase in marginalized communities could lead to increased spread of, and deaths from, COVID-19,” a group of more than 40 House lawmakers wrote in a letter this week to President Biden and CDC Director Rochelle Walensky, urging them to extend the moratorium. 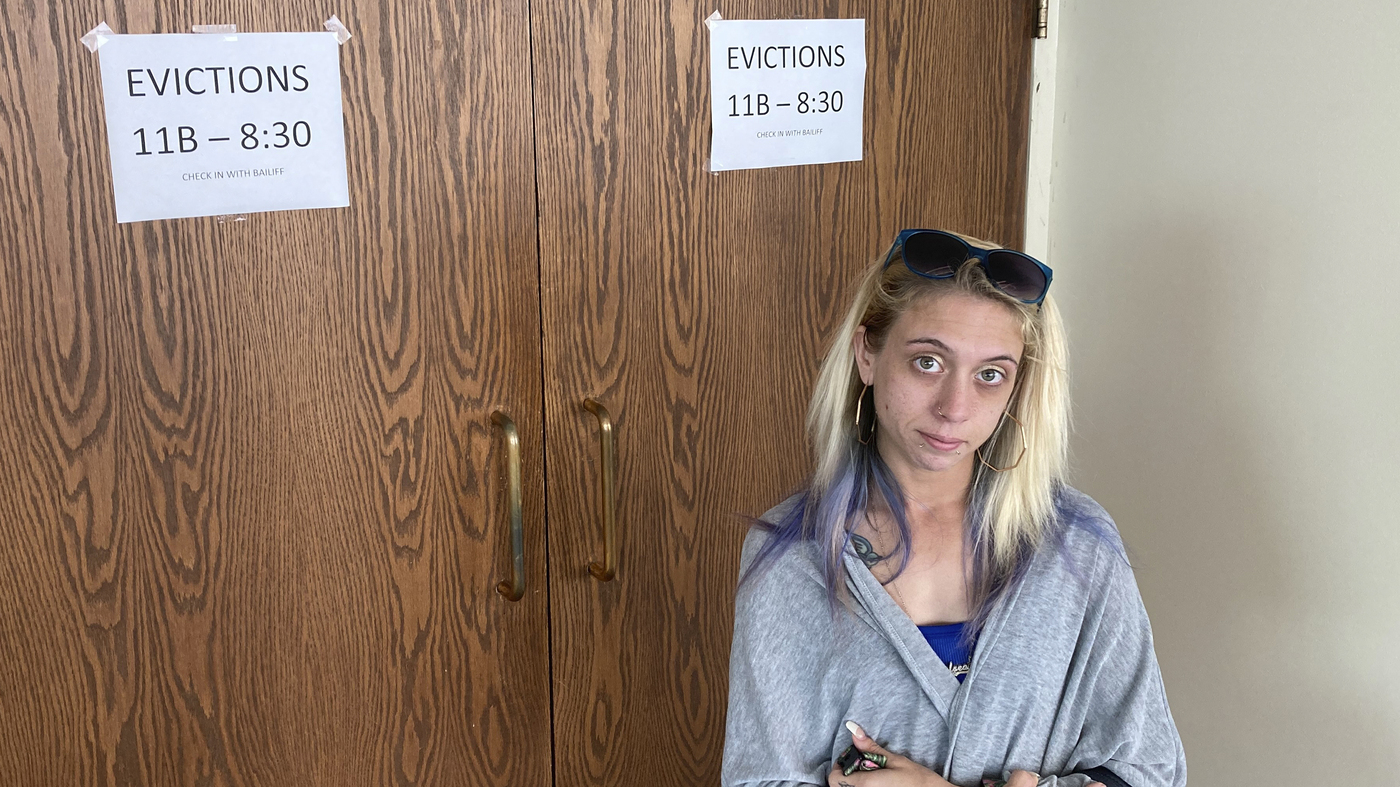