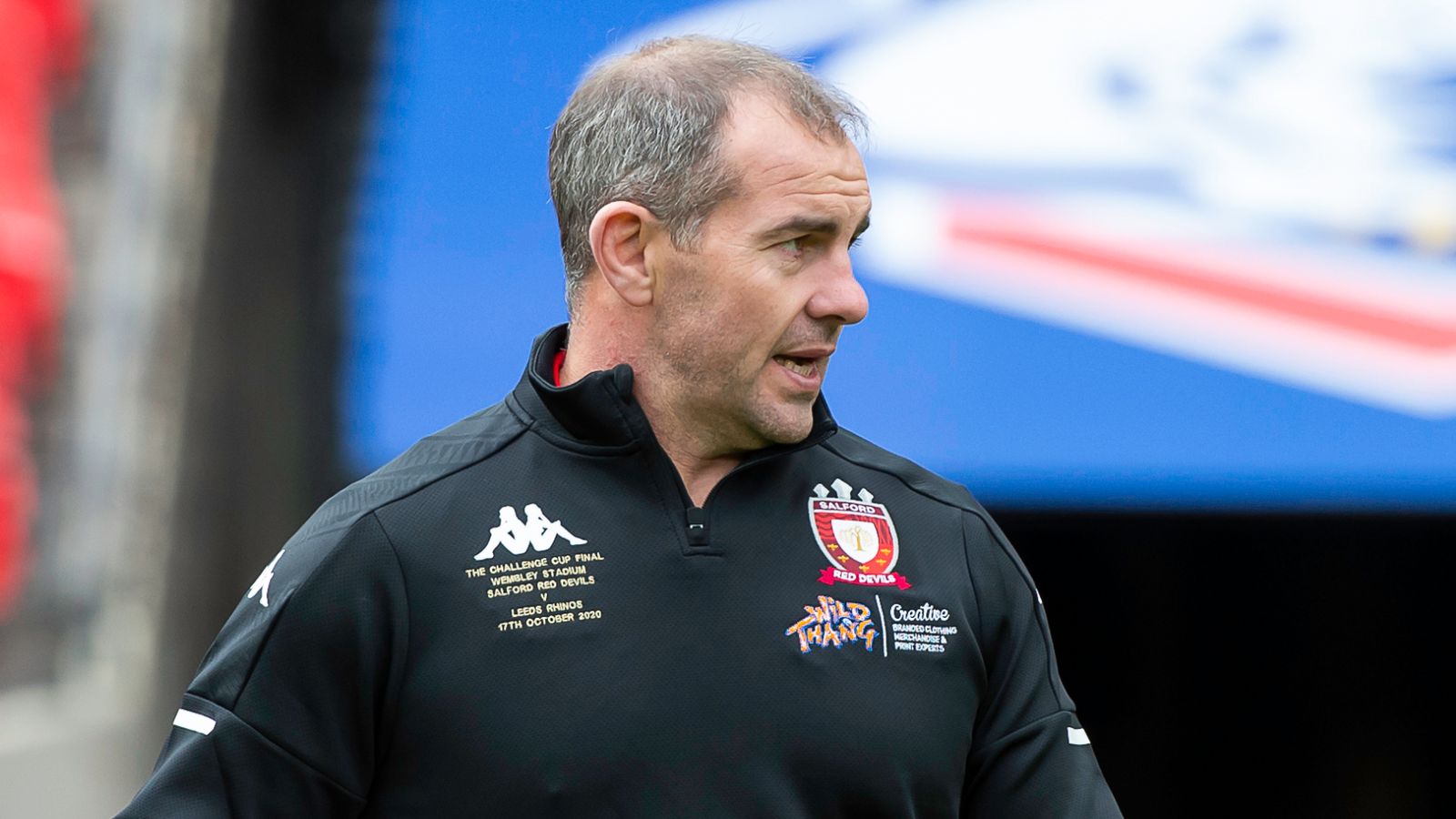 “To come here with it ending up being a 17-16 result, players and staff and everybody being absolutely devastated… is probably a sign of how far we’ve come as a group,” says Salford head coach after defeat to Leeds at Wembley

Ian Watson is in no doubt Salford Red Devils are still moving in the right direction after a narrow defeat to Leeds Rhinos in the Challenge Cup final.

Second-half tries from Pauli Pauli and James Greenwood had put the Red Devils four points up with just under a quarter of an hour to play, but Ash Handley’s second try and a drop goal from Luke Gale saw Leeds snatch a 17-16 win.

The loss at Wembley in another of rugby league’s major showpieces comes just over a year after Salford were beaten by St Helens in the Super League Grand Final and head coach Watson believes it shows how far the club has come in recent seasons.

“It shows the club and the team are moving in the right place from where we have been and they’re competing in these big games now,” Watson said.

“With everything that has happened and to come here with it ending up being a 17-16 result, players and staff and everybody being absolutely devastated we’ve not been able to win, is probably a sign of how far we’ve come as a group and a team over the last few years as well.

The former Salford half-back was left to rue missed opportunities from his team in both halves of the match, citing Krisnan Inu and Niall Evalds both putting in kicks in dangerous positions when he felt they could have taken other options with the ball in hand as two examples.

We’ve been to a Grand Final last year, we’ve been to a Challenge Cup final this year and we’ve kind of backed up what we did, and it’s for us to keep building.

He would not be drawn on whether or not referee Liam Moore’s decision to pull up try-scorer Pauli Pauli for an incorrect play-the-ball on halfway, leading to Leeds getting into position for Gale to kick the winning one-pointer, was unduly harsh though.

“There were small margins in the game where we could have done certain things better to win it ourselves,” Watson said.

“I thought we opened them up a hell of a lot in attack and we just weren’t composed enough with the final pass.

“We were trying to find kicks to score tries off rather than turn them over on their try-line. We just weren’t smart enough at those times to capitalise and put Leeds on the end of some aggressive defence.

“There were a few turning points in that game and we did think when we scored that [Greenwood] try, it was looking like it was our day. We just needed to be composed and good enough to defend out that result.”

The nature of the loss made it even more agonising for the team and Watson made no secret of the fact everyone was feeling the hurt in the immediate aftermath of the final.

However, he urged his side to focus on finishing the Super League season strongly as they start to build towards 2021.

“It will sting, and it already was in the dressing room,” Watson said. “We’ve got some players who are right at the back end of their careers now in Mark Flanagan and Kris Welham – even Kev [Brown] is not getting any younger.

It shows the club and the team are moving in the right place from where we have been and they’re competing in these big games now.

“You don’t know when you’re going to be here or whether you could get here again, so it was important for us to take that opportunity.

“Leeds have got the win and we congratulate them on the win. We’ve got to move forward, focus on the rest of the season and finish the season well.”