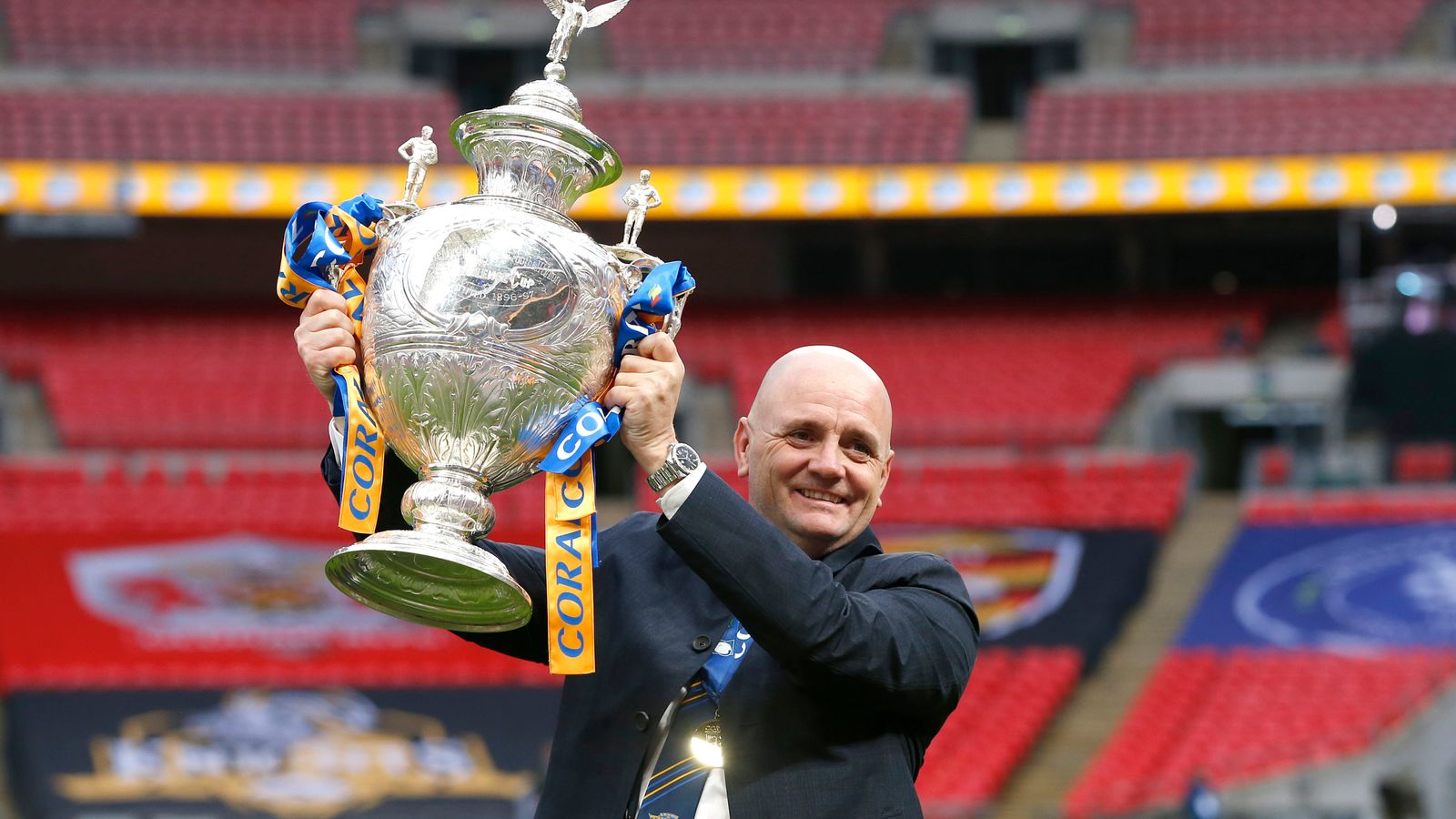 Richard Agar praised the contribution of Luke Gale to the Leeds Rhinos cause in 2020 after he kicked the match-winning drop goal in their Challenge Cup final triumph against Salford Red Devils.

As he has done on several occasions for both the Rhinos this season and throughout his career, the England half-back came to the fore in a crunch situation to slot over a drop goal as the match headed into the final five minutes to seal a 17-16 win at Wembley.

Gale, who was released by his hometown club as a teenager after coming through the academy, rejoined Leeds ahead of this year and head coach Agar was delighted to see the man he handed the captaincy to for this season write his name in history.

“His contribution has been fantastic,” Agar said. “We’ve asked him to play not a different style for him, but we’ve probably got some different philosophies and principles from Castleford and the success they had there and brilliant style of play.

“He’s had to see the game in a fractionally different way when we’ve got the ball. He’s not short on confidence and when it comes to those moments, he wants to take them and own them.

“To hang in there and have so much success over the last four or five seasons, even being subjected to major injuries, I think that shows what the game means to Luke.

“The winning captain, your name goes on the plaque of the cup, so that’s on there forever and I’m really happy for him and really glad we signed him.”

He’s not short on confidence and when it comes to those moments he wants to take them and own them.

Claiming the Challenge Cup in his maiden Wembley final appearance comes after rebounding from some struggles with serious injuries in recent years, although as Agar pointed out Gale is not the only player in the Leeds squad who has faced adversity.

Richie Myler is another, having had to reinvent himself as a full-back this year due to the signing of Gale and the form of Robert Lui leaving him very much as second choice when it came to either of the half-back positions.

Myler was subsequently voted as Lance Todd Trophy winner for his performance in the win over Salford and Agar hailed his attitude throughout this year.

“Richie would have copped his fair share of criticism last year,” Agar said. “I’ve had a fairly long-standing relationship with Richie and we were very open about the reasons we wanted to sign Luke Gale.

“It could have gone one or two ways, but I see the value of having a person like Richie. He’s experienced, he’s tough – I don’t think people give him credit for just how tough he is – and he was prepared to adapt.

“I’m pleased for him on a personal level, I’ve got so much admiration for the way he’s attacked this year, and he’s become such an important and popular team man this year that the respect he carries within our group is massive.”

The cup final success is all a far cry from Agar’s first game in charge of the Rhinos last year when they suffered an embarrassing exit in this competition at the hands of Championship side and former Super League rivals Bradford Bulls.

The turnaround in the club’s fortunes he has overseen means he has emulated his father Allan in guiding a team to Challenge Cup success, although Agar was quick to insist the players deserve all of the plaudits.

The journey of getting bundled out embarrassingly at Bradford last year, it’s a little bit of a resurrection for us.

“The journey of getting bundled out embarrassingly at Bradford last year, it’s a little bit of a resurrection for us,” Agar said.

“I think to turn it around in the space of 12 months, it’s real credit to our players. It wasn’t perfect, but the spirit we’ve got inside us managed to get us over the line.

“It makes you wonder if it was in the script somewhere along the line. If you believe in that sort of stuff, there’s a lot to point to.”