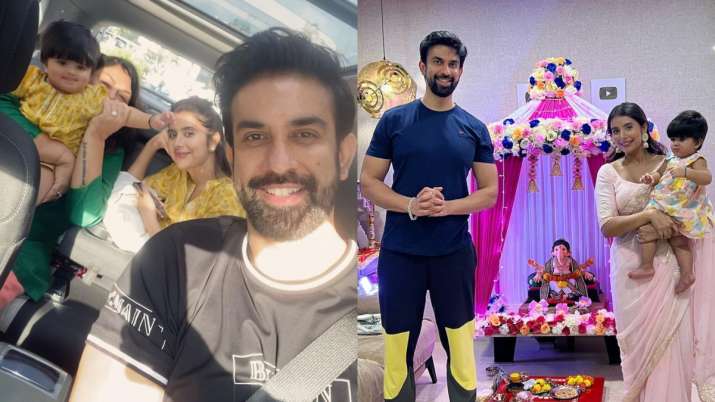 Charu Asopa and Rajeev Sen have decided to reconcile and give their marriage a second chance. Their fans and well-wishers are happy after the couple’s announcement. Ever since they both have been sharing pictures and videos with each other and their daughter Ziana. This year on Ganesh Chaturthi they welcomed Lord Ganesha in their home and have been continuously sharing pictures on social media platforms as they celebrate the festival. Rajeev recently took to his Instagram handle and shared a series of loved-up pictures with his wife and daughter Ziana. Take a look:

What caught everyone’s attention was Charu’s comment on the pictures. The actress who had previously blocked her husband on Instagram dropped a red heart and an evil eye emoji in the comments section. Their fans also bombarded the post with their sweet comments. One of them wrote, “Wow I’m so happy sir aap dono phir se sath ho gaye.” Another said, “god bless you all beautiful family pics.”

For the unversed, Rajeev Sen and Charu Asopa tied the knot in June 2019. Not a long time ago, Charu sparked her divorce rumours with Rajeev when she deleted all her pictures with him from social media. The couple was seen taking indirect digs at each other and also revealed various things in the media about their impending divorce.

However, recently they both have decided to not call off their marriage. In a long Instagram post, Charu and Rajeev announced their decision. They posted family picture and wrote, “Marriages are made in heaven but it is left to us to make it work. Yes we went ahead and announced that we are ending our marriage and we realised that we had reached the dead end and nothing beyond. Divorce was an option we were considering and we wont deny that.”

“Happy to announce that we have decided to keep our Marriage for good , We both are blessed with a beautiful daughter ziana & we wish to give her the very best as parents . Her upbringing & happiness is our number one priority.. We want to thank all our fans for always supporting us as a couple & never giving up on us .. Thank you everyone for blessing Ziana with so much love. Charu & Rajeev,” the post read.

On the professional front, it is reported that the couple will be seen together in Salman Khan‘s reality show Bigg Boss 16.