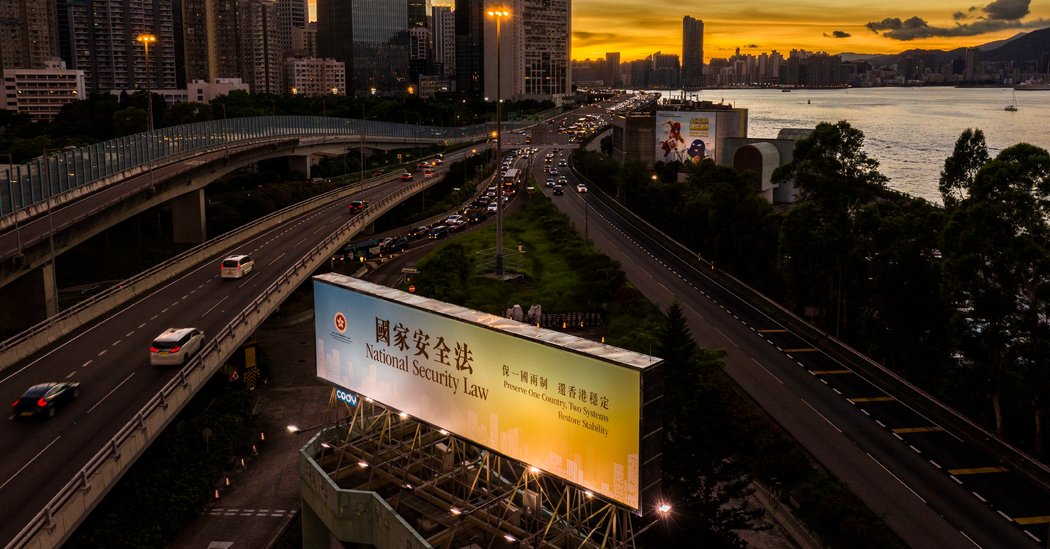 China passed a contentious new law for Hong Kong on Tuesday that would empower the authorities to crack down on opposition to Beijing, risking deeper rifts with Western governments that have warned about the erosion of freedoms in the territory.

The swift action, less than two weeks after lawmakers first formally considered it, signaled the urgency that the Communist Party leader, Xi Jinping, has given to expanding control in Hong Kong after the territory was convulsed by pro-democracy protests last year.

The law underscores Beijingâ€™s resolve to achieve a political sea change in Hong Kong, a former British colony with its own legal system and civil liberties absent in mainland China. It could be used to stifle protests like those that last year evolved into an increasingly confrontational, and sometimes violent, challenge to Chinese rule.

The Chinese legislature approved the law a day before July 1, the politically charged anniversary of Hong Kongâ€™s handover to China in 1997, which regularly draws pro-democracy protests. On the anniversary last year, a massive peaceful demonstration gave way to violence when a small group of activists broke into the Hong Kong legislature, smashing glass walls and spray-painting slogans on walls.

â€œXi Jinping is looking at more comprehensive control over Hong Kong, and the national security law will go a long way to achieving that control,â€ Willy Wo-Lap Lam, a longtime commentator on Chinese politics and an adjunct professor at the Chinese University of Hong Kong, said in an interview.

â€œIt will be a new ballgame, affecting schools, affecting the media, and many other arenas of Hong Kong life.â€

Mr. Xi has driven the security law through despite the challenges his government faces with the coronavirus pandemic, a lingering economic downturn and visa bans from the Trump administration aimed at Chinese officials involved in Hong Kong policy.

The security law was approved by the National Peopleâ€™s Congress Standing Committee, an elite arm of Chinaâ€™s party-controlled legislature, in a process that drew criticism for its unusual secrecy.

Breaking from normal procedure, the committee did not release a draft of the law for public comment. Hong Kongâ€™s activists, legal scholars and officials were left to debate or defend the bill based on details released by Chinaâ€™s state news media earlier this month.

The law calls for Hong Kongâ€™s government to establish a new agency to oversee enforcement of the new rules. Beijing will create its own separate security arm in Hong Kong, empowered to investigate special cases and collect intelligence.

Carrie Lam, Hong Kongâ€™s top official, has said that the law will target only an â€œextremely small minority of illegal and criminal acts and activities,â€ and will make the territory safer for most residents.

But critics say that the new security agencies and politically shaded categories of crime, such as â€œinciting separatism,â€ could send a chill across Hong Kong society. Activists are worried that the law could target those who peacefully call for true autonomy for the territory.

â€œPotentially, the security law penetrates a lot of activities that contribute to the vibrancy of Hong Kongâ€™s civil society and the character of this international city and financial center,â€ said Cora Chan, an associate professor of law at the University of Hong Kong who has studied Chinaâ€™s drive for security legislation.

The Hong Kong government is required to introduce national security legislation under the Basic Law, the cityâ€™s constitution, but such legislation has long been seen as deeply unpopular and divisive. The governmentâ€™s attempt to do so in 2003 foundered after a protest by nearly 500,000 people, and successive local administrations have been reluctant to revisit the matter.

A survey of 1,002 respondents by the Hong Kong Public Opinion Research Institute in mid-June that was commissioned by Reuters found that more than half were opposed to the security legislation, while just over a third supported it. But backing for the demonstrations had also weakened to 51 percent, according to the survey, down from 58 percent in a poll in March.

In pushing through the legislation, Mr. Xi has taken matters out of the hands of politicians in Hong Kong and asserted that the Chinese central authorities have the power to prescribe security laws for the territory. That argument has been decried by legal scholars in Hong Kong, who say that Beijing is overreaching.

China has also drawn criticism from other governments, including the Group of 7 leading industrialized democracies. Foreign ministers from the bloc said this month that the law was a threat to Hong Kongâ€™s autonomy and called on China to abandon it.

Secretary of State Mike Pompeo said on Friday that the United States would put visa restrictions on Chinese officials deemed to have undermined Hong Kongâ€™s â€œhigh degree of autonomy.â€ He did not name any officials or say how many might be barred.

In Beijing, Zhao Lijian, a spokesman for the Chinese foreign ministry, denounced the move by the United States as interference. At a regular briefing on Monday, Mr. Zhao said China would impose tit-for-tat visa restrictions on Americans â€œwith egregious conduct related to Hong Kong issues.â€

Later on Monday, though, the Trump administration sent another warning shot over the security legislation by restricting exports of U.S. defense equipment and some high-technology products to Hong Kong.

â€œIf it has a deterrent effect, then Beijing might not have to do too many prosecutions,â€ said Mr. Lau, who is now vice chairman of the Chinese Association of Hong Kong and Macau Studies, an elite group that advises Beijing on Hong Kong policy.

Even before officially confirming that the law had won approval, Chinese state-run media unleashed a flurry of reports promoting it as a boon to Hong Kong. The legislation would â€œensure the lasting stability and prosperity of Hong Kong, making the pearl of the East even more splendid and beautiful,â€ said a report on CCTV, Chinaâ€™s main broadcaster.

To the cityâ€™s pro-democracy activists, the law threatens to further narrow their fast shrinking space for dissent.

Last week, the Hong Kong police force denied applications from three groups to hold protest marches on Wednesday, the anniversary of the handover, citing risks from the coronavirus and dangers of violence. This was the first time in more than two decades that the July 1 protest march had been banned, the Civil Human Rights Front said.

On Sunday, the Hong Kong police arrested 53 people on suspicion of â€œunlawful assemblyâ€ after dozens of protesters gathered in a busy commercial area to denounce the security law.

â€œItâ€™s simply hard to go out to protest like we did last year,â€ Bonnie Leung, a former leader of the Civil Human Rights Front, said in an interview. â€œBut the momentum is still there, the anger is still there.â€