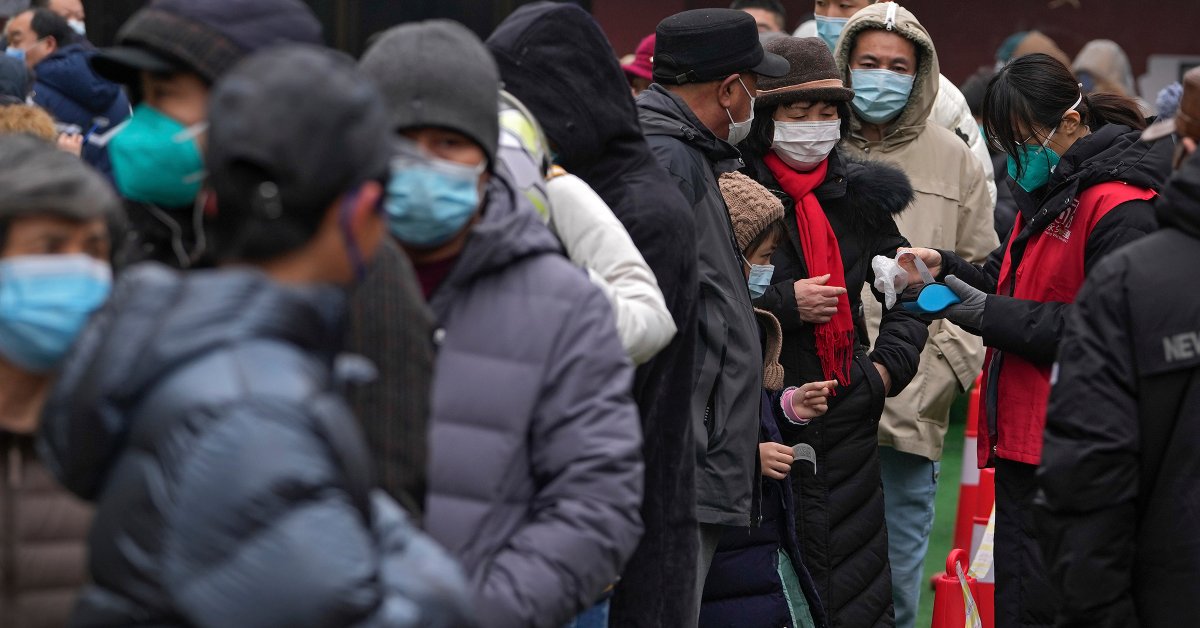 (BEIJING, China) — A cluster of COVID-19 cases in Beijing has prompted authorities to test millions and impose new measures two weeks ahead of the opening of the Winter Olympics, even as the city of Xi’an in north-central China lifted on Monday a monthlong lockdown that had isolated its 13 million residents.

Officials in Beijing said they would conduct a second round of mass testing of the Fengtai district’s 2 million residents, where the majority of the capital’s 40 coronavirus cases since Jan. 15 have been found. That came a day after authorities announced that anyone who buys or who has bought fever, cough or certain other medicines in the past two weeks would be required to take a COVID-19 test within 72 hours.
[time-brightcove not-tgx=”true”]

The severe measures, despite a relatively low number of cases, illustrate the acute concern of government officials in the run-up to the Olympics, which open in Beijing on Feb. 4.

“The current epidemic prevention situation is still grim and complicated and all departments across the city must act proactively and swiftly,” Beijing city spokesperson Xu Hejian said.

“The overall situation is controllable,” he added.

The ruling Communist Party’s “zero tolerance” COVID-19 policy has brought with it drastic efforts to stamp out any signs of new outbreaks — including last month’s lockdowns of Xi’an and two other cities, and the partial suspension of train and plane routes to Beijing to isolate it from outbreak areas.

Overall, the number of reported new cases has been falling in China from more than 100 a day at the peak of the Xi’an outbreak to 18 on Sunday, six of which were in Beijing. Despite the drop, pandemic controls remain stepped-up ahead of the Games, where all participants will be tested every day and be completely isolated from the general public.

Visiting Olympic athletes are required to be vaccinated or undergo a quarantine after arriving in China.

Ben Cowling, a public health expert at Hong Kong University, said that COVID-19 infections still could leak out of the Olympic bubble.

“I would estimate there is a good chance of at least one lockdown being implemented in Beijing in the coming month,” he said.

On top of the first round of mass testing in the capital’s Fengtai area, targeted testing was conducted Sunday at residential communities in six other districts, the Beijing Daily reported. It wasn’t fully clear who was being tested. The newspaper said that in one community, an official said that if a resident had been to a high-risk area in Fengtai or Fangshan, another affected district, occupants of the entire building would have to be tested twice.

The government told people in areas of Beijing deemed at high risk for infection not to leave the city. A number of nearby provinces reported cases linked to the outbreaks in the capital, including Shandong and Hebei provinces.

Beijing officials said an Omicron cluster that infected six people had been brought under control. The Fengtai outbreak is Delta-driven and Chinese health officials have alleged it is linked to imported frozen food.

Pang Xinghuo, deputy director of the Beijing Center for Disease Control, said that gene sequencing of virus samples from the frozen food was consistent with that in 28 infected people. Foreign experts are skeptical that COVID-19 can spread easily from packaging.

The announcement of the end of the lockdown in Xi’an followed the restart of commercial flights from the city over the weekend. The major tourism center and former imperial capital, famed as the home of the Terracotta Warrior statue army, struggled to get food to some residents in the early days of the lockdown, after people were confined to their homes.

Access to Xi’an was suspended Dec. 22 following a Delta outbreak. More than 2,000 people were infected in the city, which is about 1,000 kilometers (600 miles) southwest of Beijing.

Other outbreaks prompted the government to impose travel bans on a number of cities, including the port of Tianjin, about an hour from Beijing. The stiff regulations are credited with preventing major nationwide outbreaks and China has reported relatively few cases of the highly infectious Omicron variant.

More than 3,000 people have arrived for the Games from Jan. 4 through Sunday, including more than 300 athletes and team officials, organizers said Monday. The rest are media and other participants. So far, 78 people have tested positive, including one who was an athlete or team official. China has waived the usual 21 days of hotel quarantine for those coming for the Olympics.

The IOC announced Monday some changes in the COVID-19 policy for the Games, including a reduction in the period an infected person is considered a close contact from 14 to 7 days.