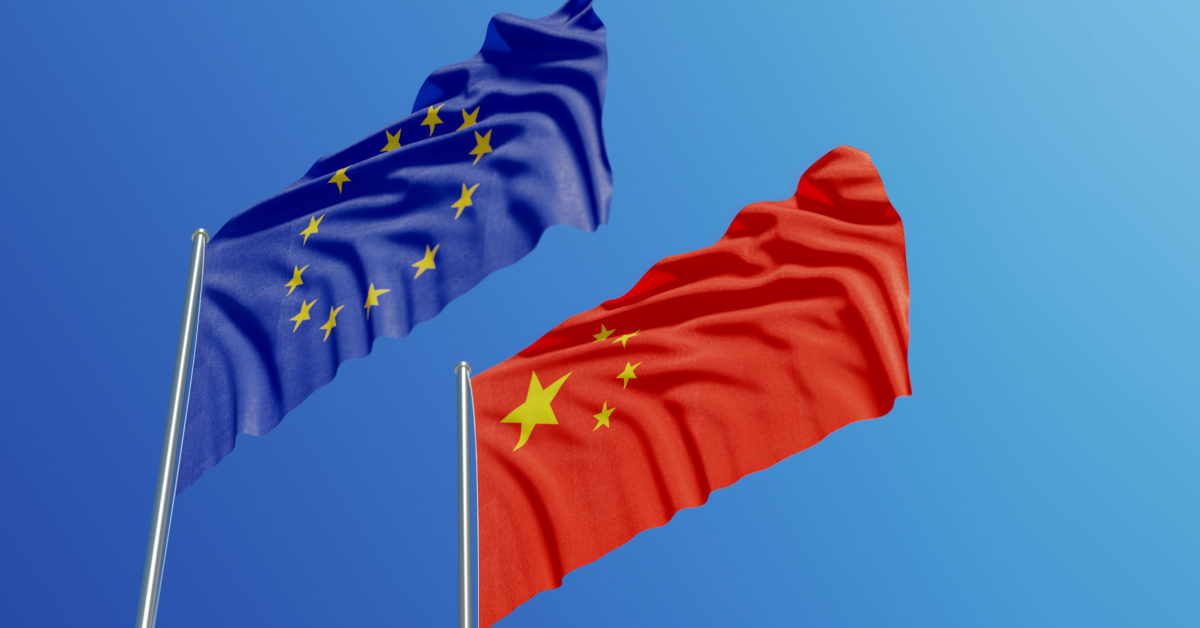 Europe’s attempt to keep politics and business apart in China is blowing up in its face.

Only three months after China and the EU struck a trade deal to make it easier to do business in each other’s markets, Beijing’s acid-tongued officials are now training their full ire on the EU and other Western countries. Party officials and celebrities alike are encouraging 1.4 billion consumers to boycott certain European brands. Hundreds if not thousands of shops are closing their doors to European clothes amid a nationwide backlash over Western sanctions imposed last week because of Beijing’s crackdown against Muslim Uyghurs.

The EU’s sudden relegation to the blacklist is a major reversal for Brussels, which long enjoyed a softer ride than the U.S. and (lately) Australia when it came to invective from Chinese officials and state media. The knives are now out, however, with diplomats seeking to divert attention to Europe’s colonial crimes and accusing it of hypocrisy for condemning “re-education” camps for Muslims in the far-western region of Xinjiang.

The most immediate commercial target now is Swedish fashion brand H&M, alongside other American and European retailers that ban the use of cotton from Xinjiang amid widespread concerns over forced labor and other human rights violations. The state-run CCTV broadcaster ran a series of reports on Monday lambasting the Better Cotton Initiative (of which most of the boycotted fashion brands are members) as “not professional, not transparent and not independent.”

Xu Guixiang, a government spokesman in Xinjiang, came out with guns blazing on Monday, and turned the tables by accusing Europeans and Americans equally of racism, slave trading and colonial-era crimes. While Chinese public rhetoric has traditionally gone easier on the EU â€” as Beijing sought to stop Washington and Brussels uniting on China policy â€” Xu made explicit reference to Germany’s role in the Holocaust and killings by French forces in Algeria.

When asked specifically about boycotts and H&M at a press conference, Xu replied: “It’s not a good idea to bully Chinese people, including Xinjiang’s people of different ethnicities. One of the most direct reactions is that we stop buying your products. Few people go to H&M stores now … Can you still do business in the Chinese market? Can you still earn money from Chinese people? Not even a penny.”

In a further sign that Chinese policy is undergoing a deeper hardline retrenchment, Taiwan on Friday reported Beijing’s biggest ever incursion â€” of some 20 planes â€” into its airspace.

While the fashion boycott started with a social media post from the Communist Party’s youth league, Foreign Ministry spokesman Zhao Lijian denied the government’s involvement, and attributed the measures purely to public outrage. “Of course Chinese people feel disgusted and angry [by the lies about Xinjiang’s cotton] â€” how would that need the government to agitate and lead?” Zhao told reporters on Monday.

In a reflection of the increasingly vitriolic public narrative, the Hugo Boss fashion brand has also found itself under fire for putting out a statement that it is not directly sourcing cotton from Xinjiang. “This German brand that made military uniforms for the Nazis is on fire,” read the title of an article on Chinese news portal Sina Finance, referring to the company’s use of forced labor in World War II.

Behind the nationalistic fashion row lies a deeper Chinese fear, with Beijing feeling it needs to signal discontent over Europe’s increasing diplomatic coordination with Beijing’s arch rival, the United States. China’s tougher line on Europe also comes as part of a far broader escalation of rhetoric and saber-rattling, in disputes running from Canberra to Ottawa.

Beijing’s fear stems from U.S. President Joe Biden’s gradual push for a global alliance to confront China, especially after the U.S. coordinated with the EU, the U.K. and Canada to impose sanctions against Xinjiang officials simultaneously on Monday last week.

That was followed by U.S. Secretary of State Antony Blinken’s visit to Brussels on Tuesday and Wednesday, with a plea to Europe to “outcompete” China together. These concerted efforts to tackle human rights abuses in Xinjiang â€” which the U.S. says amount to a genocide â€” spark deep anger in China because it classes its measures against the Uyghurs as an internal security affair, dedicated to combating Islamist radicals.

China’s suspicions about the international community ganging up against it were only compounded late last week, when Biden and U.K. Prime Minister Boris Johnson mulled over plans to undercut the Belt and Road Initiative, President Xi Jinping’s multi-trillion-dollar global investment and infrastructure scheme to link China to western economies. Johnson floated the possibility of putting this high on the agenda of the upcoming G7 summit that he’ll chair in June.

Canada is especially feeling the heat, over a case involving the arrest of a top executive from the telecoms company Huawei at America’s request. Bizarrely, the job of attacking Canadian Prime Minister Justin Trudeau fell to Chinese Consul-General to Rio de Janeiro Li Yang, who said on Twitter on Sunday: “Boy, your greatest achievement is to have ruined the friendly relations between China and Canada, and have turned Canada into a running dog of the US. Spendthrift!!!”

And this is exactly the kind of media treatment that the Europeans are now encountering too. “France, UK and EU launched a war in Libya, leading to regional turbulence & grave migrant and refugee issues. Shouldn’t they be held accountable?” spokeswoman Hua Chunying said in one of a series of angry tweets that also brought up Nazis and the French in Algeria.

While this was done in coordination with the U.S., the U.K. and Canada, media had reported the impending EU moves well beforehand, giving Beijing time to prepare to hit back hard. It did so with counter-sanctions on diplomats as well as the European Parliament’s human rights committee and other lawmakers. Indeed, the response to the EU and the U.K. was significantly harsher than that on Canada and the U.S.

Beijing is not, however, giving up on Europe as a totally lost cause and is still playing some of its classic divide-and-rule tactics. Chinese Defense Minister Wei Fenghe last week visited Hungary, Greece, North Macedonia and Serbia. Three of those four countries are NATO members, while Wei boasted of plans to “push the military-to-military relations to a new level” with some of those countries.

Chinese state media are also giving the EU a second chance to rethink whether its trade ties with China or an alliance with the U.S. matters more.

“Both China and Europe must stay alert and remind themselves not to fall into the US’ predetermined battlefield,” an editorial in the Global Times newspaper, one of the country’s top media outlets, said on Monday. “If the story evolves as the US has designed … China will lose the big strategic environment to open up and Europe will lose its objective of being strategically independent and lose much of the Chinese market and will have to follow the US lead. That will be a scenario in which the US is the sole winner while both China and Europe lose.”

But in Britain and France, at least, the Chinese countermeasures seems to be stiffening spines.

In London, Prime Minister Johnson himself received five parliamentarians in No. 10 Downing Street on Saturday, just a day after they were blacklisted by Beijing. They included former Tory leader Iain Duncan Smith and David Alton, a member of the House of Lords who was one of the key advocates for a genocide amendment to be inserted into the government’s trade bill.

In Paris, Foreign Minister Jean-Yves Le Drian met RaphaÃ«l Glucksmann, a French MEP and one of Brussels’ most effective activists shedding light on the plight of the Uyghurs.

“After the Chinese ambassador to Paris was summoned, I met with [Glucksmann] to state my solidarity against the antisemitic slurs and the intimidation campaign with which he is targeted,” Le Drian tweeted on Friday. “On the documented human rights abuses in Xinjiang, France’s position is firm … We call for an international mission led by the [United Nations] High Commissioner for Human Rights to be sent to the area, as soon as possible.”

France will play a critical role in the fate of the EU’s investment agreement with China, as it will be during its EU Council presidency next year that the accord is likely to reach the endgame of ratification (or not) in the European Parliament.

And Paris’s sentiment toward Beijing is not improving.

“It is not by trying to intimidate our parliamentarians, researchers & academics that it will respond to legitimate concerns about the treatment of Uyghurs in Xinjiang,” France’s trade minister Franck Riester said on Sunday. “The attitude of China is extremely shocking.”

CORRECTION: This article has been updated to correct the number of NATO member countries the Chinese defense minister visited.

This article is part of POLITICOâ€™s premium policy service Pro Trade. From transatlantic trade wars to the U.K.â€™s future trading relationship with the EU and rest of the world, Pro Trade gives you the insight you need to plan your next move. Email [emailÂ protected] for a complimentary trial.