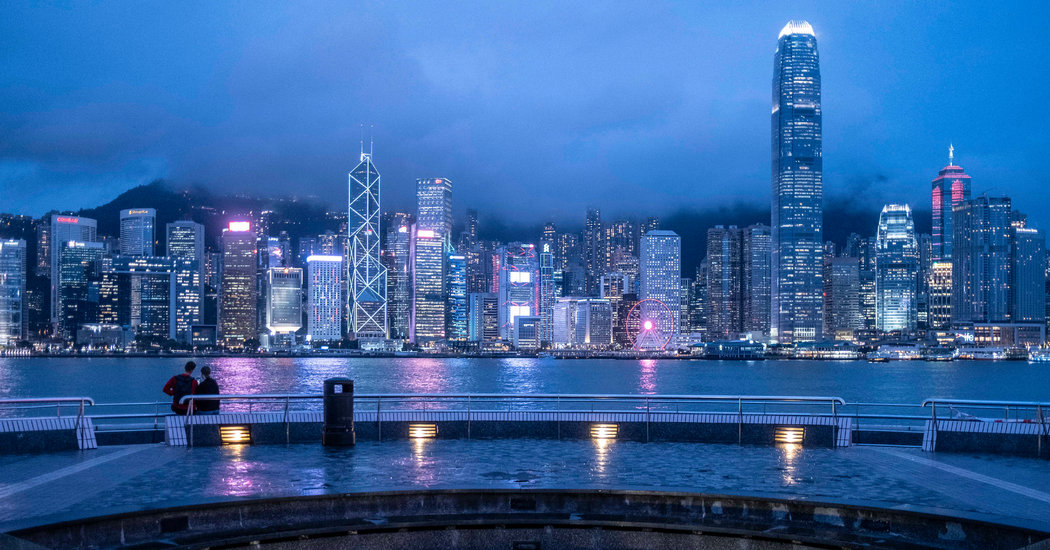 Chinese lawmakers meeting from Sunday could approve a national security law as early as this week, drastically curbing political protest and dissent in Hong Kong and adding to Chinaâ€™s tensions with Western powers.

The National Peopleâ€™s Congress Standing Committee â€” an arm of Chinaâ€™s Communist Party-run legislature â€” discussed the draft law this month, and a Hong Kong member of the committee has said it may vote for the legislation by the end of its latest three-day session starting Sunday, â€œif conditions are ripe.â€ But Hong Kong residents are still waiting to see the full text of the law.

A law to curb opposition in Hong Kong.

The security law could deter speech, protests and media critical of the Chinese government, threatening the territoryâ€™s independent press and democratic opposition.

Many Hong Kong residents are proudly protective of their rights under the territoryâ€™s separate legal system and have opposed attempts to pass such legislation. A previous push by Hong Kongâ€™s leaders to enact a national security law foundered in 2003 after nearly 500,000 people joined a street protest against it.

Chinaâ€™s top leader, Xi Jinping, has been impatient to impose control over Hong Kong. After the territory erupted in monthslong protests last year over a proposed extradition law, a Communist Party meeting in October demanded steps to â€œsafeguard national securityâ€ in Hong Kong.

The National Peopleâ€™s Congress Standing Committee usually meets every two months or so. This time, the committee is meeting just a little over a week after it first discussed the security legislation at its last session, suggesting that Mr. Xi wants the law passed, or at least on the cusp of approval, before July 1, the 23rd anniversary of Hong Kongâ€™s return to Chinese sovereignty.

Legal experts had been uncertain how Mr. Xi could introduce a national security law into Hong Kong without going through the cityâ€™s Legislative Council, a body stacked with pro-Beijing members who have, nonetheless, hesitated to take such a contentious step.

But Mr. Xi made a bold move to break the impasse in May, when a full session of the National Peopleâ€™s Congress nearly unanimously passed a resolution empowering the Congressâ€™s Standing Committee to bring state security legislation into the Basic Law.

The central governmentâ€™s decision to impose a law effectively circumvents the Hong Kong legislature. Even Hong Kong politicians who have endorsed the law, including the territoryâ€™s top official, Carrie Lam, have said they have not been shown the full text by Beijing, which will bring into Hong Kong new crimes like inciting separatism and â€œcolluding with foreign powers.â€

The law will also establish a new security agency in the territory to enforce the security restrictions, and Beijing will create its own separate security arm in Hong Kong, empowered to investigate special cases and collect intelligence, according to a summary issued by Chinaâ€™s legislature.

The legislation also gives the territoryâ€™s chief official, who must answer to Beijing, the power to decide which judges are empowered to hear trials for state security charges, limiting the autonomy of the cityâ€™s judiciary.

Many residents fear the law.

Carrie Lam, Hong Kongâ€™s local leader, has sought to reassure the public that their â€œlegitimate rights and freedomsâ€ will be safeguarded. She and other politicians who support the law have also said that it will target only a tiny minority of lawbreakers.

Pro-democracy activists have denounced the proposed law, and the Hong Kong Bar Association has called it unconstitutional.

The Hong Kong police force has denied applications from three groups â€” the League of Social Democrats, the Civil Human Rights Front and pro-democracy district officials â€” to hold marches opposing the law on July 1, the politically sensitive anniversary of Hong Kongâ€™s handover to Chinese rule, citing risks from the coronavirus and dangers of violence. If the police decision survives appeal, it would be the first time since 2003 that a march on July 1 has been banned, the Civil Human Rights Front said. Some protesters may ignore the order and march.

A survey by the Hong Kong Public Opinion Research Institute in mid-June found that 49 percent of respondents â€œvery much opposeâ€ the security legislation, while another 7 percent â€œsomewhat opposeâ€ it, Reuters reported. But the survey also indicated that public backing for street demonstrations had softened: Support for protests fell to 51 percent, down from 58 percent in a poll in March.

As China has moved forward with plans to impose security laws in Hong Kong, foreign governments have criticized the decision. Foreign ministers from the Group of 7 leading industrialized democracies called on China this month to abandon the law, saying that it would undermine the autonomy of the territory.

Secretary of State Mike Pompeo said on Friday that the United States would impose visa restrictions on Chinese officials, including retired ones â€œbelieved to be responsible for, or complicit in, undermining Hong Kongâ€™s high degree of autonomy.â€ He did not name any officials or say how many might be barred.

Prime Minister Boris Johnson of Britain has promised to allow nearly three million people from Hong Kong to live and work in the country. Mr. Johnson, however, has left unanswered questions about how those admitted might be able to obtain British citizenship.

Taiwan said this month that it would expand efforts to provide refuge to protesters and others who wish to leave Hong Kong. The government said it could, in certain cases, provide work and study visas, as well as assistance securing housing and jobs.