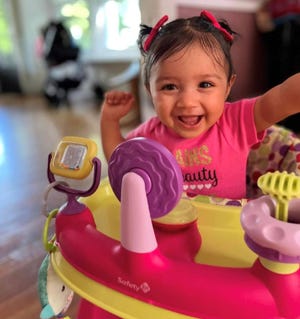 A Connecticut man was arrested in the murder and dismemberment of his 11-month-old daughter after a two-week manhunt, according to police.

Christopher Francisquini, 31, was taken into custody Friday afternoon at a bus stop in Waterbury, Connecticut, police dash camera footage from the Waterbury Police Department shows. Police were alerted to his location by a community member who said he recognized Francisquini at the stop and called in a tip.

Local police and the FBI had been searching for him since the body of his infant daughter, Camilla, was found Nov. 18 in his home in Naugatuck, a town about 17 miles northwest of New Haven. The baby had been choked, stabbed and dismembered, authorities said.

Police said Francisquini was wanted as a suspect and faces charges of murder with special circumstance and risk of injury to a minor. They have not released a motive in the killing.

“Nothing can ease the pain that the family’s experiencing as the result of this tragic loss of a child taken from them far too soon, but we hope that they can breathe easier knowing that this violent criminal has been taken into custody and he is off the streets,” Naugatuck Police Chief Colin McAllister said at a press conference.

Camilla was laid to rest a last week. She would have celebrated her first birthday Saturday, the Naugatuck Police Department said, and a vigil is planned for her Saturday evening. Community members were asked to wear pink and display pink lights around town for her birthday.

Police said Francisquini got into an argument with Camilla’s mother after the killing. He then removed a court-ordered GPS device he was wearing while on house arrest for a previous charge and destroyed his cell phone, authorities said.

McAllister said the community member who reported seeing Francisquini at the bus stop on Friday had been following coverage of the incident. A reward offered by the FBI for information leading to Francisquini’s arrest and conviction was raised in recent days to $25,000 from $10,000.

Francisquini was on parole for a 2012 domestic assault conviction, police said, and court records show he was also out on bail in pending cases for carjacking, burglary, assault and other crimes. McAllister said bail was set at $5 million in this case.