Climate Change Is Transforming the Bodies of Amazonian Birds 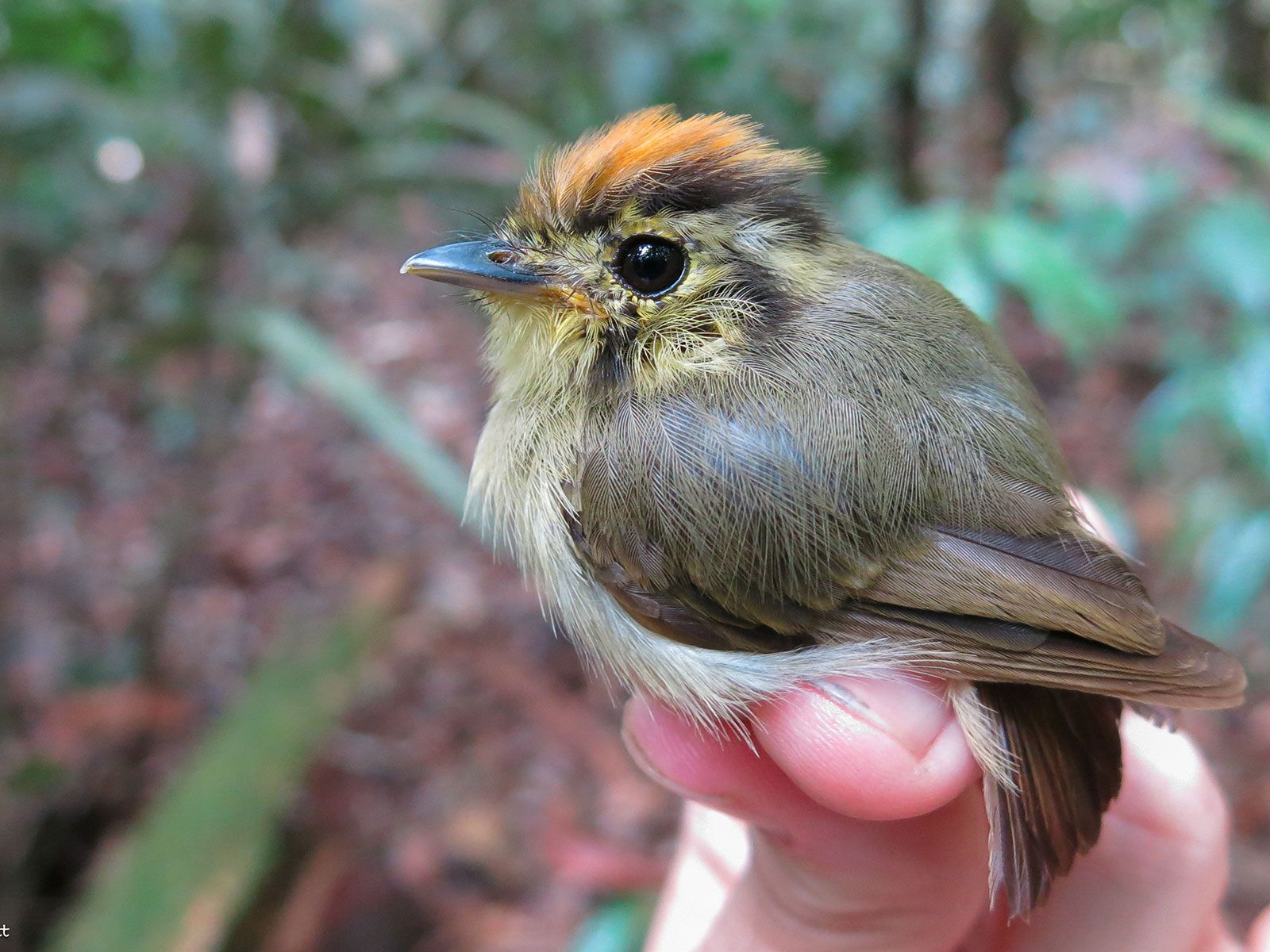 When the first ever World Climate Conference concluded in February 1979, the scientists in attendance issued a statement calling on world leaders “to foresee and prevent potential man-made changes in climate that might be adverse to the well-being of humanity.” On October 17 of that same year, scientists deep in the Brazilian Amazon unfurled a set of 16 mist nets at 6 a.m. to begin a study of the birds living in the understory beneath the rainforestâ€™s green roof.

In the 40 years that followed, climate change went from a far-off-seeming idea to a grave reality that grips every square inch of the planet, and hundreds of dedicated researchers kept opening the mist nets at dawn to capture and study the feathered inhabitants of an intact patch of Brazilian rainforest about 40 miles north of Manaus.

Now, a new paper leveraging this long-running study, originally aimed at testing the impacts of forest fragmentation, shows that as human activities have altered Earthâ€™s climate, the bodies of birds living in the understory of this remote, undamaged patch of rainforest have been changing in response. The authors of the paper report today in the journal Science Advances that all 77 species of birds surveyed by the study weigh less on average than they did 40 years ago and nearly 80 percent of those species also have developed greater average wing-lengths.

Researchers arenâ€™t yet sure what the consequences of these physiological changes might be or the precise mechanisms that gave rise to them, but the teamâ€™s analyses suggest the rising temperatures and changes in rainfall seen at the study site offer the most powerful statistical explanation for the birdsâ€™ transformation.

â€œThis is the middle of the Amazon rainforest, far away from deforestation,â€ says Vitek Jirinec, an ecologist at Louisiana State University and the paperâ€™s lead author. â€œBut even here, in this place that is teeming with life and looks totally undamaged, you canâ€™t escape the consequences of climate change.â€

Jirinec and his co-authors embarked on this study in earnest in 2020 after finding that 21 species of birds at this site north of Manaus, known to researchers as the Biological Dynamics of Forest Fragments Project (BDFFP), were in decline. Even within this protected area, buffered from logging and pollution, some species had declined by as much as 40 percent, especially insect-eaters. Those results, published in 2020, led Jirinec and his colleagues to try to tease out what might be going on, and, in particular, to probe the role of climate change.

To do that, the researchers compiled the weights of 14,842 individual birds and the wing lengths of 11,582 birds recorded by BDFFP scientists between 1979 and 2019 and paired those data with the last 50 years of changes in temperature and precipitation in the region.Â

In terms of climate change, the team found that compared to 1966 this regionâ€™s wet seasons have become 13 percent wetter and its dry seasons are now 15 percent drier. The average temperature for both seasons has also increased over that time span, with temperatures rising by 1.8 degrees Fahrenheit in the wet season and 2.97 degrees in the dry season.

Among the birds, all 77 species in the study showed average decreases in body weight over the last four decades, with some species losing nearly 2 percent of their mass every decade, and 61 species showed increases in average wing-length. Statistical analysis linked those changes to climatic shifts.

The results fall short of demonstrating cause and effect, but show a strong association. â€œThe relationship between body size and climate change is correlational, naturally,â€ writes Mario Cohn-Haft, an ornithologist with Brazilâ€™s National Institute of Amazonian Research who wasnâ€™t involved in the paper, in an email. â€œBut both several-decade long trends and year to year trends are demonstrated here with a monstrous amount of data to support them.â€

The study found that birds tended to be lighter following hotter and drier conditions than usual, especially if those conditions fell during the dry season, which is the most stressful time of year for birds because food is harder to find.

Puzzlingly, these physical changes didnâ€™t appear to be helping or hurting the birdsâ€™ abilities to survive in the Amazon. There wasnâ€™t any correlation between a given speciesâ€™ abundance and the severity of its bodily transformations.

â€œWe may not have enough data or the right data to show these traits give birds an advantage,â€ says Jirinec.

Overall, the findings echo those of another major study of birds from 2019 that looked at 70,716 individual birds from 52 migratory species that died after slamming into skyscrapers in Chicago over roughly the same 40-year timespan. That research found that those birdsâ€™ lower leg bones, which are commonly used as indicators of body size, shrank by 2.4 percent on average and their wingspans increased by 1.3 percent on average.

â€œOur study raised questions about whether our findings were due to warming or if they were adaptations to changing migratory patterns,â€ says Ben Winger, an evolutionary biologist at the University of Michigan who co-authored the 2019 study. â€œBut the birds in this study arenâ€™t migrating, which speaks to this being a more universal phenomenon. To me, it suggests that there is no hiding from warming temperatures.â€

This trend of shrinking bird bodies isnâ€™t completely unexpected. The phenomenon dovetails with a well-established biological principle known as Bergmannâ€™s Rule, which holds that animals from the chillier, higher latitudes tend to be bigger than animals that inhabit the warmer climes closer to the equator. The traditional explanation is that bigger animals have less surface area exposed to the elements relative to their interior volume, which makes it easier for them to retain heat. Conversely, smaller critters lose heat more rapidly because they have more surface area and less body volume compared to the big guys. Based on this rule, there has been some expectation among researchers that warming the globe might spur shrinkage among its fauna.

Still, this study on its own canâ€™t definitively show that these birds are getting lighter on their feet to manage excess body heat on a hotter planet. Bette Loiselle, an ecologist at the University of Florida who wasnâ€™t involved in the study, says the birds might be getting smaller in response to there being less food available.

The birdsâ€™ lengthening wings donâ€™t fit as easily with existing theories of animal physiology, but Jirinec and his co-authors suggest that this change might also help the birds deal with heat stress by making flight more efficient. But Jirinec says we canâ€™t know for sure, and that one could also interpret this change as a response to lower food availability.

The other glaring unknown is what the long-term consequences of these physiological alterations might be for the birds and the ecosystem they inhabit. â€œThese birds play crucial roles in the Amazon and changing these traits might impact that,â€ says Loiselle. â€œBody size is part of what mediates which flowers a bird pollinates, how far it can fly with a piece of fruit or how many insects it eats. We donâ€™t yet know how these changing traits will spin out ecologically down the road.â€

Winger says he and his collaborators are delving back into their massive collection of migratory bird specimens from Chicago to look at their DNA in hopes of discerning whether the changes in body composition they uncovered are the result of genetic changes. Jirinec says he and his group are looking to probe the increase in wing length more deeply to figure out how this change in birdsâ€™ mass to wing ratio is shifting the equation in terms of flight performance.

But ultimately, Jirinec says the biggest takeaways from this study are the pervasiveness of climate change and the value of long-term studies. â€œDriving your SUV in Pennsylvania is impacting the bodies of birds in Amazonia, and the only reason we know that is because of this long-term data,â€ says Jirinec. â€œThese projects are incredibly hard to fund, but theyâ€™re one of the only ways we can track what climate change is doing to wildlife.â€