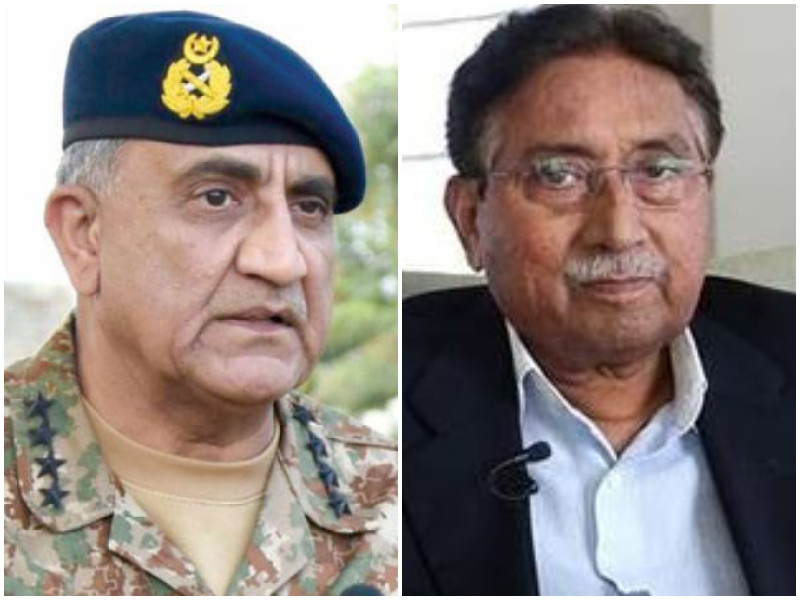 “Gen Qamar and his wife were accompanied by top physicians of Pakistan Army,” one source told The Express Tribune. “Gen Musharraf and his family greeted the COAS and his wife with great delight,” added the source, who was also present in the meeting.

According to the sources, the visitors spent some time with Gen Musharraf and his family at their apartment while the army doctors examined the 78-year-old former military ruler, who was diagnosed with the life-threatening health condition, called Amyloidosis, in 2018 in the UAE.

Amyloidosis is a group of rare, serious conditions that is caused by a build-up of an abnormal protein, called amyloid, in organs and tissues throughout the body, says the UK’s National Health Service. If left untreated, these protein deposits can lead to organ failure.

The family of Musharraf – who has been living in self-exile in Dubai since 2016 – has yet not made their mind to fly him back to Pakistan. Earlier this week, the family ruled out the possibility citing lack of proper treatment in Pakistan.

“An uninterrupted supply and administration of experimental drug Daratumumab needed alongside associated treatment of Amyloidosis that are currently not available in Pakistan,” the family wrote on Musharraf’s Twitter handle on June 21. “It’s not easy to take a call on Musharraf’s return from Dubai where he is undergoing treatment.”

The family also revealed that they had been assured that the Pakistani government and the military establishment would facilitate the septuagenarian general’s smooth return.

“Communications have been received from official and unofficial channels that [Musharraf’s] return home will be facilitated. We sincerely appreciate these overtures since Pakistan is home,” they said.

On June 14, The Express Tribune reported that the exiled general, who seized power in a 1999 coup and was president from 2001 to 2008, had expressed a desire to spend the rest of his life in Pakistan. His close associates subsequently approached the “powerful quarters” and government officials to make a formal request.

The development came on the heels of a Twitter statement from the family in which they said Musharraf’s “recovery is not possible”.

“He has been hospitalised for the last three weeks due to a complication of his ailment (Amyloidosis). Going through a difficult stage where recovery is not possible and organs are malfunctioning. Pray for ease in his daily living,” the family wrote in a Twitter post.

The developments triggered a media guessing game on the military’s possible reaction, which came through quickly. The chief military spokesperson said the “military brass believes Musharraf should be brought back to Pakistan”.

“General Pervez Musharraf’s health is very bad. In such a situation, the leadership of the institution is of the view that he should be brought back to Pakistan. But this decision will be made by his family and doctors,” Maj Gen Babar Iftikhar said in a TV interview on June 14.

“Musharraf’s family has been contacted for this purpose,” he added. “If the family gives its consent, then arrangements would be made to bring him back.”

Gen (retd) Pervez Musharraf had toppled the government of then prime minister Nawaz Sharif in 1998 in a bloodless coup and then sent the Sharif family into exile as a result of a deal brokered by a friendly country.

Sharif, however, says he holds no grudge against Musharraf.

“I’ve no personal feud with Pervez Musharraf. I don’t want anyone to go through the same emotional shock and trauma with regard to their loved-ones as I had to endure,” he said in a cryptic reference to his tormentor.

“I pray to Almighty Allah to grant him recovery. If he wants to return, then the government should facilitate him,” Sharif said in a tweet.

Sharif, who was sentenced to seven years in jail in a corruption case in Dec 2018, has been living in London for the treatment of some undiagnosed illness. He was flown to London in an air ambulance in Nov 2019, a month after the three-times premier was released on bail.

On Dec 17, 2019, a special court found Musharraf guilty of high treason and sentenced him to death under Article 6 of the Constitution in a 2-1 split verdict. The trial was initiated by Sharif, whom Musharraf deposed in the 1999 coup. He was elected prime minister in 2013 for the third time.

Gen Musharraf was the first army chief to be charged with high treason and the security establishment had watched the case carefully. It said the special court ruling had been “received with a lot of pain and anguish by rank and file of the Pakistan armed forces”.

“An ex-army chief, chairman joint chief of staff committee and president of Pakistan, who has served the country for over 40 years, fought wars for the defence of the country can surely never be a traitor,” the military said in a statement issued by its media wing.

On Jan 13, 2020, a Lahore High Court bench, while ruling on Musharraf’s petition against the formation of the special court, overturned the death sentence by declaring the legal process unconstitutional.