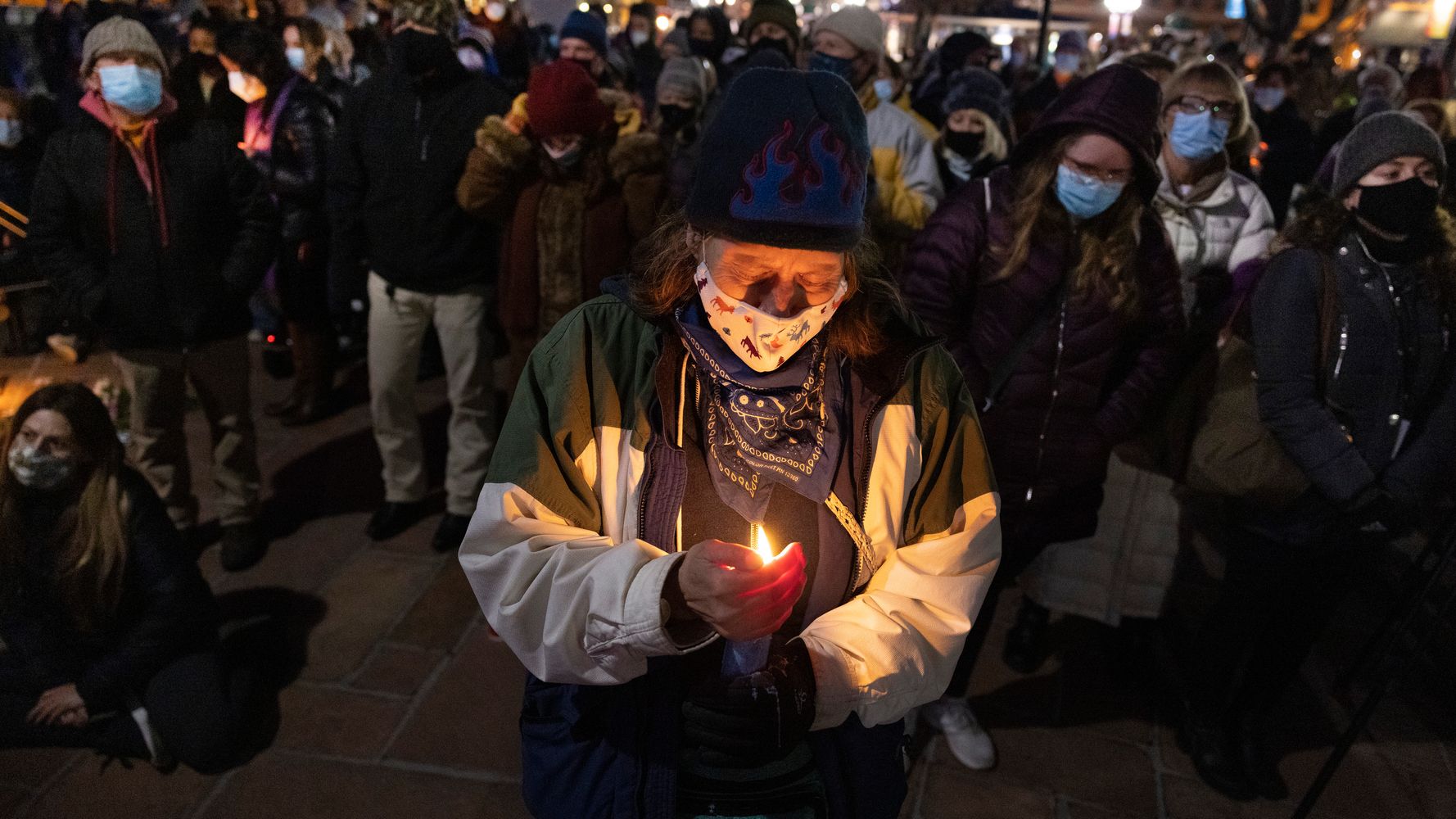 BOULDER, Colo. (AP) â€” Hundreds of mourners gathered Wednesday night at a candlelight vigil to remember the 10 people gunned down at a supermarket in a Colorado college town, while the 21-year-old man suspected of carrying out the rampage prepared for his first court appearance Thursday morning.

Ahmad Al Aliwi Alissa has been jailed for investigation of murder since he was arrested inside the King Soopers supermarket in Boulder on Monday and treated at a hospital for a leg wound. He was to hear the pending charges he faces and his rights as a defendant, and he would not be asked for a plea until later in the judicial process.

Alissa was last seen handcuffed and being led out of the supermarket by police. He had removed all clothing except shorts before being taken into custody. A rifle, a green tactical vest and a handgun were recovered inside the grocery store, according to an arrest affidavit.

While most Colorado court proceedings have been conducted by video during the pandemic, District Judge Thomas Francis Mulvahill ordered Alissa to appear before him in court unless Alissa waives his right to appear in person in writing. The courtroom will be closed to the public.

More than 500 people bundled in winter jackets and wool hats attended a downtown candlelight vigil Wednesday night to mourn the victims and comfort one another. They observed a moment of silence; violins soothed the crowd; a woman sang â€œAve Mariaâ€ as candle flames flickered in the crisp air. A star-shaped light usually turned on for the holidays glowed on a mountain overlooking the open square.

Michele Weiner-Davis, a Boulder family therapist, offered the community her words of wisdom.

â€œWhatever youâ€™re feeling, whatever youâ€™re thinking, no matter how uncomfortable, itâ€™s completely natural,â€ Weiner-Davis said. â€œBe patient with yourself. Additionally, be just as compassionate with the people in your lives who might also be struggling.â€

Earlier Wednesday, hundreds of people paid their respects during a police procession for Talley as his body was taken to a funeral home in the Denver suburb of Aurora.

Police also announced that people whose cars were left in the supermarket parking lot Monday could retrieve them.

A supermarket employee told the AP she watched as the assailant opened fire and narrowly escaped his notice while joining others in a desperate scramble to get away.

Emily Giffen, 27, was smoking outside the store Monday during a break when she heard multiple loud pops that she knew were not fireworks. She said she saw a man running across an intersection suddenly fall over and another man approach him in a crouch and fire several rounds at close range.

â€œI donâ€™t know how he didnâ€™t see us,â€ she said of the suspect, who walked right by her before she ran into the supermarket and out the back.

â€œI just really am having a hard time understanding why me and my friends deserve to die,â€ she said, wondering why the gunman chose to target the Boulder store specifically.

According to the arrest affidavit, the suspect bought a Ruger AR-556 pistol â€” which resembles an AR-15 rifle with a slightly shorter stock â€” on March 16, six days before the attack. Authorities have not disclosed where the gun was purchased.

According to two law enforcement officials, Alissa was born in Syria in 1999, emigrated to the U.S. as a toddler and later became a U.S. citizen. He would need to be a citizen to buy a gun. The officials were not authorized to speak publicly and spoke to AP on condition of anonymity.

An AR-15-style gun was recovered inside the supermarket and was believed to have been used in the attack, said a law enforcement official briefed on the shooting who was not authorized to speak publicly and spoke to the AP on condition of anonymity.

Associated Press writers Michael Balsamo and Colleen Long in Washington, Jim Anderson in Denver, Thalia Beaty in New York and AP staff members from around the U.S. contributed to this report. Nieberg is a corps member for the Associated Press/Report for America Statehouse News Initiative. Report for America is a nonprofit national service program that places journalists in local newsrooms to report on undercovered issues.