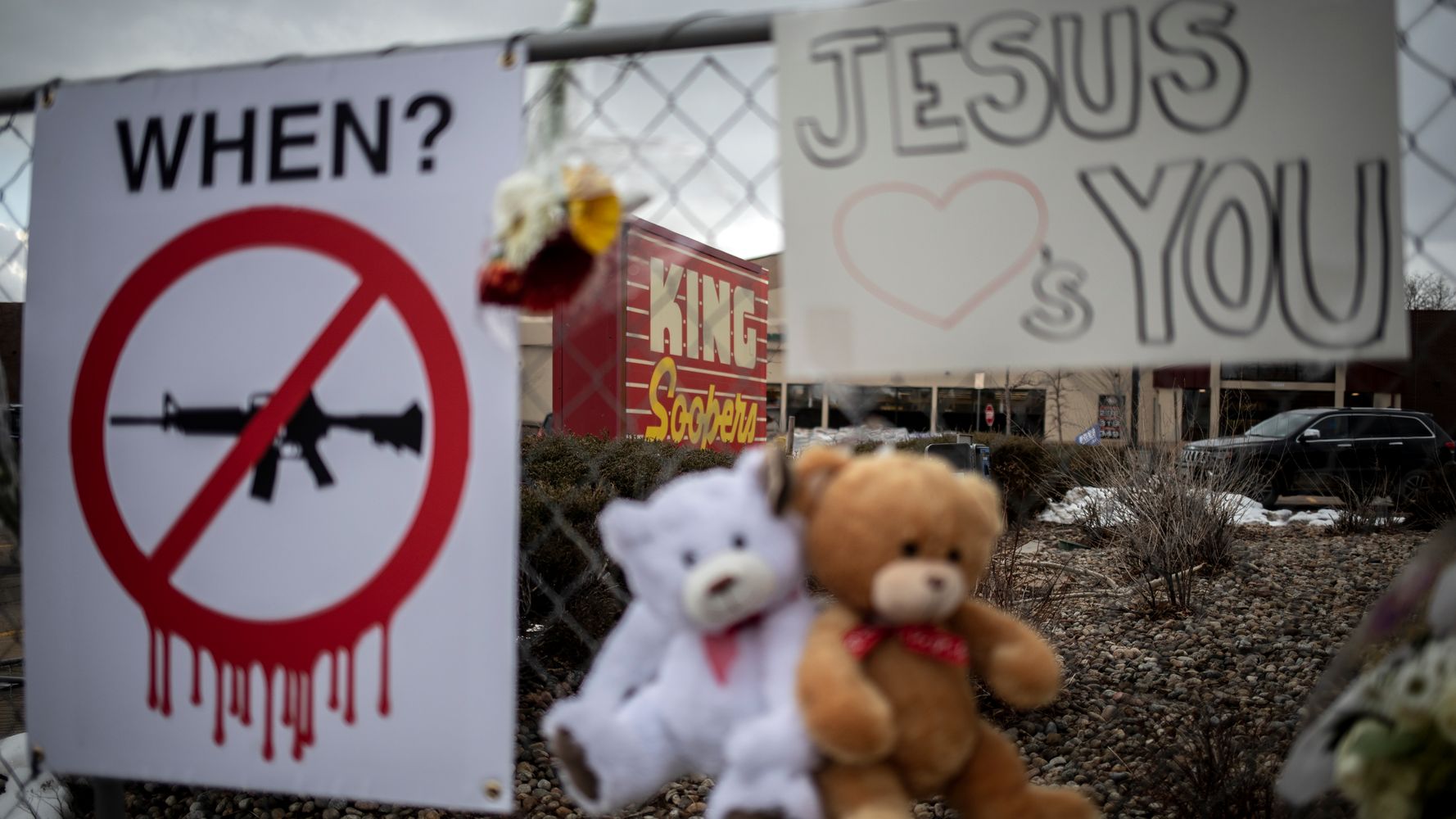 BOULDER, Colo. (AP) â€” The suspect accused of opening fire inside a crowded Colorado supermarket was a 21-year-old man who purchased an assault weapon less than a week earlier, authorities said Tuesday, a day after the attack thatÂ killed 10 people, including a police officer.

Ahmad Al Aliwi Alissa bought the weapon on March 16, just six days before the attack at a King Soopers store in Boulder, according to an arrest affidavit. It was not immediately known where the gun was purchased.

Alissa, who is from the Denver suburb of Arvada, was booked into the county jail Tuesday on murder charges after being treated at a hospital. He was due to make a first court appearance Thursday.

Investigators have not established a motive, but they believe Alissa was the only shooter, Boulder County District Attorney Michael Dougherty said.

A law enforcement official briefed on the shooting said the suspectâ€™s family told investigators they believed Alissa was suffering some type of mental illness, including delusions. Relatives described times when Alissa told them people were following or chasing him, which they said may have contributed to the violence, the official said. The official was not authorized to speak publicly and spoke to the AP on condition of anonymity.

The attack was the nationâ€™s deadliest mass shooting since a 2019 assault on a Walmart store in El Paso, Texas, where a gunman killed 22 people in a rampage that police said targeted Mexicans.

â€œTen lives have been lost, and more families have been shattered by gun violence in the state of Colorado,â€ Biden said at the White House.

The shooting came 10 days after a judge blocked a ban on assault rifles passed by the city of Boulder in 2018. That ordinance and another banning large-capacity magazines came after the 2018 mass shooting at Marjory Stoneman Douglas High School in Parkland, Florida, that left 17 people dead.

A lawsuit challenging the bans was filed quickly, backed by the National Rifle Association. The judge struck down the ordinance under a Colorado law that blocks cities from making their own rules about guns.

Supermarket employees told investigators that Alissa shot a man multiple times outside the Boulder grocery store before going inside, according to the affidavit. Another person was found shot in a vehicle next to a car registered to the suspectâ€™s brother.

The gunfire sent terrorized shoppers and employees scrambling for cover. SWAT officers carrying ballistic shields slowly approached the store while others escorted frightened people away from the building, which had some of its windows shattered. Customers and employees fled through a back loading dock to safety. Others took refuge in nearby shops.

Multiple 911 calls paint a picture of a chaotic, terrifying scene, according to the affidavit.

One caller said the suspect opened fire out the window of his vehicle. Others called to say they were hiding inside the store as the gunman fired on customers. Witnesses described the shooter as having a black AR-15-style gun and wearing blue jeans and maybe body armor.

By the time he was in custody, Alissa had been struck by a bullet that passed through his leg, the affidavit said. He had removed most of his clothing and was dressed only in shorts. Inside the store, he had left the gun, a tactical vest, a semiautomatic handgun and his bloodied clothing, the affidavit said.

After the shooting, detectives went to Alissaâ€™s home and found his sister-in-law, who told them that he had been playing around with a weapon she thought looked like a â€œmachine gun,â€ about two days earlier, the document said.

No one answered the door at the Arvada home believed to be owned by the suspectâ€™s father. The two-story house with a three-car garage sits in a relatively new middle- and upper-class neighborhood.

When he was a high school senior in 2018, Alissa was found guilty of assaulting a fellow student in class after knocking him to the floor, then climbing on top of him and punching him in the head several times, according to a police affidavit.

Alissa â€œgot up in classroom, walked over to the victim & â€˜cold cockedâ€™ him in the head,â€ the affidavit read. Alissa complained that the student had made fun of him and called him â€œracial namesâ€ weeks earlier, according to the affidavit. He was sentenced to probation and community service.

One of his former wrestling teammates, Angel Hernandez, said Alissa got enraged after losing a match in practice once, letting out a stream of invectives and yelling he would kill everyone. Hernandez said the coach kicked Alissa off the team for the outburst.

â€œHe was one of those guys with a short fuse,â€ Hernandez said. â€œOnce he gets mad, itâ€™s like something takes over and itâ€™s not him. There is no stopping him at that point.â€

Hernandez said Alissa would also act strangely sometimes, turning around suddenly or glancing over his shoulder. â€œHe would say, â€˜Did you see that? Did you see that?â€™â€ Hernandez recalled. â€œWe wouldnâ€™t see anything. We always thought he was messing with us.â€

Arvada police Detective David Snelling said officers investigated but dropped a separate criminal mischief complaint involving the suspect in 2018 and cited him for speeding in February. â€œOur community is obviously concerned and upset that the suspect lived here,â€ he said.

â€œWeâ€™d absolutely prefer not to have publicity weâ€™re getting here,â€ said Matt Benz, who lives several houses away from the home that was searched overnight. He said dozens of FBI agents wearing night-vision goggles swarmed the area using a bullhorn to order everyone out of the home and was interviewing the homeâ€™s occupants.

The slain officer was identified as Eric Talley, 51, who had been with the force since 2010. He was the first to arrive after responding to a call about shots fired and someone carrying a gun, she said.

Homer Talley, 74, described his son as a devoted father who â€œknew the Lord.â€ He had seven children, ages 7 to 20.

â€œWe know where he is,â€ his father told The Associated Press from his ranch in central Texas. â€œHe loved his family more than anything. He wasnâ€™t afraid of dying. He was afraid of putting them through it.â€

Well after dark Tuesday night, about 100 people milled about at a makeshift memorial near the supermarket that was adorned with wreaths, candles, banners reading â€œ#Boulderstrongâ€ and 10 crosses with blue hearts and the victimsâ€™ names. Four young girls huddled in the cold, one of them crying as she reminisced about how they had protested the 2018 shooting at Marjory Stoneman Douglas High School in Parkland, Florida.

Oldsâ€™ grandmother choked up on the phone as she described the young woman she played a large role in raising. â€œShe was just a very kind and loving, bubbly person who lit up the room when she walked in,â€ said Jeanette Olds, 71, of Lafayette, Colorado.

The attack in Boulder, about 25 miles (40 kilometers) northwest of Denver and home to the University of Colorado, stunned a state that has seen several mass shootings, including the 1999Â Columbine High SchoolÂ massacre and the 2012 AuroraÂ movie theater shooting.

Mondayâ€™s attack was the seventh mass killing this year in the U.S., following the March 16 shootingÂ that left eight people dead at three Atlanta-area massage businesses, according to a database compiled by the AP, USA Today and Northeastern University.

It follows a lull in mass killings during the coronavirus pandemic in 2020, which had the smallest number of such attacks in eight years, according to the database, which tracks mass killings defined as four or more dead, not including the shooter.

Biden announced that flags nationwide would be lowered in memory of the victims â€” an order that comes just as a previous flag-lowering proclamation expired for those killed in the Atlanta-area shootings. Together the two orders mean near-continuous national mourning for almost two weeks.

Slevin reported from Denver. Associated Press writers Michael Balsamo in Washington, Jim Anderson in Denver and AP staff members from around the U.S. contributed to this report. Nieberg is a corps member for the Associated Press/Report for America Statehouse News Initiative. Report for America is a nonprofit national service program that places journalists in local newsrooms to report on undercovered issues.