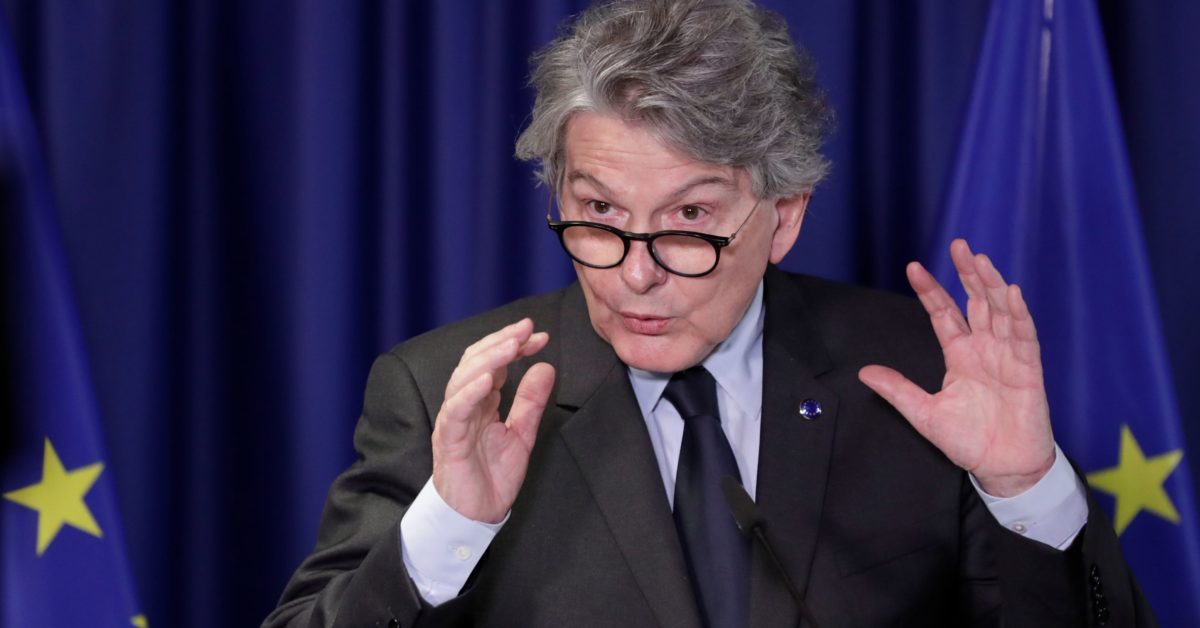 The pre-dawn check-in with Soriot is the first item in Breton’s daily regimen of disaster prevention checks as the head of the European Commission’s Vaccine Task Force. After Soriot calls from his home in Australia, Breton talks to Modernaâ€™s StÃ©phane Bancel in Massachusetts and Pfizerâ€™s Albert Bourla in Connecticut to hear where the bottlenecks are, and when the next batch of EU doses are coming.

Breton, the EU’s internal market commissioner, is now the face of Europe’s vaccine frenzy, which has him crisscrossing the Continent in search of new production sites after AstraZeneca fell far short of its first-quarter deliveries to the EU.

Now with vaccine solidarity crumbling and several national capitals turning abroad for jabs, Breton has added EU governments to his itinerary. After stopping in the Netherlands on Wednesday, he went to Italy on Thursday to discuss the governmentâ€™s plans to make more coronavirus vaccines. Next he will go to Hungary and Austria on Friday, both of which have been increasingly critical of the EUâ€™s vaccination strategy â€” and are eyeing doses elsewhere.Â

The point, Breton told POLITICO in an interview on Wednesday, is to keep manufacturers in line and capitals aligned with Brusselsâ€™ vaccine strategy despite the sluggish rollout.

â€œI’m making sure that our governments and our members are aligned with our strategy, and they are,â€ insisted Breton. â€œBut it’s important for me to spend some time with each of them to make sure that we are all aligned, and we will continue to be aligned.â€

The Commission has spent the past month trying to prove it’s in control by revamping its vaccine strategy and pointing to progress on the horizon with a fourth vaccine from Johnson & Johnson possibly coming next week, along with reports of better quarter two projections from producers. At least in one positive case, Germany sent some 15,000 doses to harder-hit Czech Republic.

All of this hasn’t placated restless capitals, however, who are eager to show citizens that they’re fighting for every vial. Austria, Denmark, the Czech Republic, Poland and Slovakia have all joined Hungary in looking to other countries for doses.

He even welcomed moves from Austria and Denmark to form a vaccine alliance with Israel â€”Â ignoring the Austrian chancellor’s targeted criticism that the EU is too slow.

â€œI have absolutely no fear that this is against anyone â€” it’s just to enhance global cooperation,â€ he said. He’ll know more on Friday, he added, after meeting with Chancellor Sebastian Kurz himself.

For now, Breton is busy making sure everyone knows it’s the EU’s vaccine strategy that is set to make real change around the bloc.

When asked about Hungary, Slovakia, Poland and the Czech Republic’s interest in Russian and Chinese vaccines, Breton made it sound like any doses those countries receive are just a drop in the ocean. It makes sense that “somebody is willing to have maybe a few doses here, a few doses there,” he said. “What we need today is doses,” he said. “Not new vaccines.”

Breton has no reason to doubt the effectiveness of the Sputnik V vaccine, considering Russia’s long history of scientific expertise: â€œWe’ll see if itâ€™s a good vaccine,â€ he said, after regulators at the European Medicines Agency thoroughly review the data. The EMA announced a rolling review for the two-dose adenovirus vaccine on Thursday.Â

The problem for Sputnik is that Russia canâ€™t mass produce it â€” aside from the fact that many Russians don’t want it.

China has also been using and sending abroad its coronavirus vaccines from Sinopharm and Sinovac. The country has vaccinated more than 50 million of its citizens, slightly more than the EU in terms of sheer numbers but less in terms of population percentage. It aims to vaccinate 40 percent of its population by the end of July, shy of targets set by both the U.S. and the EU.Â

Russia and China might be eager to send their doses around the world, including to EU countries, but Breton is clear: Only the EU and the U.S. have the capacity to supply the globe.

â€œMost countries do not have the capacity to deliver massively,â€ Breton said. The EU, therefore, has â€œthe responsibilityâ€ to help.

Breton also shrugged off Austria and Denmark’s new vaccine alliance with Israel. The two EU leaders went to the country on Thursday to iron out the details. At a press conference, the three countries said they agreed to form a new foundation to work on drug research and development, as well as jointly investing in vaccine production.

Before the announcement Thursday, Kurzâ€™s office described the effort to Breton as merely a research partnership. That’s more than fine with Breton, who said the world and Israel can benefit from Europeâ€™s top-notch research labs.

What it isn’t, Breton insisted, is a sign EU countries have lost confidence with the Commission â€” overlooking Kurzâ€™s slamming of the bloc earlier this week as â€œtoo slowâ€ and calling on Austria to look beyond the EU for vaccines.

â€œWe are in a global world,â€ Breton continued. â€œSo it’s absolutely normal that the chancellor said we cannot rely only on European vaccines, because we don’t.”

“But one thing is certain,” he added. “The only continents able to produce what is needed for their citizens, and for the planet, are Europe and the U.S.”

The EU will be able to make between 2 billion and 3 billion doses by the end of 2021 â€”Â far more vaccines than it needs. Breton is also confident the EU will have enough doses to vaccinate 70 percent of adults by the end of the summer.

â€œAs a former CEO myself, I know that we still have a lot of challenges, that it’s always difficult to project the capacity of a factory 100 percent,â€ he said. â€œBut I’m confident with the progress I see on the ground.â€

This target, combined with U.S. President Joe Bidenâ€™s pledge that every American adult will get a vaccine by May, would mean that roughly 10 percent of the worldâ€™s population could be vaccinated by the end of 2021 â€” possibly sooner.Â

Rich countries, including the EU, are standing in the way of developing countries’ access to shots, however.

The EU has thrown â‚¬1 billion at COVAX, a scheme designed to supply vaccines to low- and middle-income countries. World Health Organization chief Tedros Adhanom Ghebreyesus has criticized wealthy countries for snatching up doses, leaving COVAX with little to buy.

If anything, the EU looks poised for more. The EMA is in the process of auditing the Serum Institute of India, long seen as the main vaccine producer for poorer countries, to authorize it to send doses of the Oxford/AstraZeneca vaccine to the EU.Â

Despite the EU’s â€œresponsibilityâ€ to help low- and middle-income countries, Breton said the EU isn’t to blame for this. The bloc isn’t requesting that SII actually produce for the EU â€” even if he has an opportunity to raise the issue with Soriot every morning. Rather, it’s up to AstraZeneca â€œto decide how they want to organize themselves, and to negotiate within their own networks to fulfill their commitment with the EU. That’s it.â€

â€œThe EU has a contract with AstraZeneca, and AstraZeneca has a global worldwide network,â€ Breton said. â€œIt is their duty and their task to do what they must do to fulfill their commitments.â€

Breton, meanwhile, is still learning the lay of the land. The Halix plant he visited on Wednesday still isn’t approved to actually make drug substance for EU-marked doses, although a representative from the EMA was on site during Bretonâ€™s visit.

The regulator confirmed Thursday that the Halix plant is still not listed to supply drug substance to the bloc, saying it wouldn’t comment on whether it’s being inspected so it can be added soon. The Commission and AstraZeneca have not responded to questions from POLITICO about whether the plant is under review.

There has been speculation that Halix only got up to speed by the end of 2020, and sent those doses to the U.K. Breton says he didn’t know about this arrangement. He confirmed that the Dutch plant has been able to make at least 5 to 6 million doses monthly since the end of 2020, but didn’t have information as to whether the plant exported jabs across the Channel.Â

Since the EU implemented an export control on vaccines, however, â€œeverything has stayed in the bloc,” he said, adding that a â€œsignificant partâ€ of what Halix makes will go to its countries.

The EU’s export controls were in the spotlight again on Thursday after Italy blocked a shipment of 250,000 Oxford/AstraZeneca doses bound for Australia â€” a move that got the Commission’s sign-off.

Breton will now start adding new CEOs to his morning calls, including Johnson & Johnsonâ€™s, as soon as that vaccine gets European regulators’ green-light, expected on March 11.Â

In any case, his job won’t be over anytime soon.

â€œIf you ever have a vaccine with enough doses,â€ Breton said. â€œI think everybody would be happy.â€ But this won’t happen soon: He’s already preparing manufacturers to get ready to fight the next pandemic.Â