Controversy in the Wild Kingdom of Couture 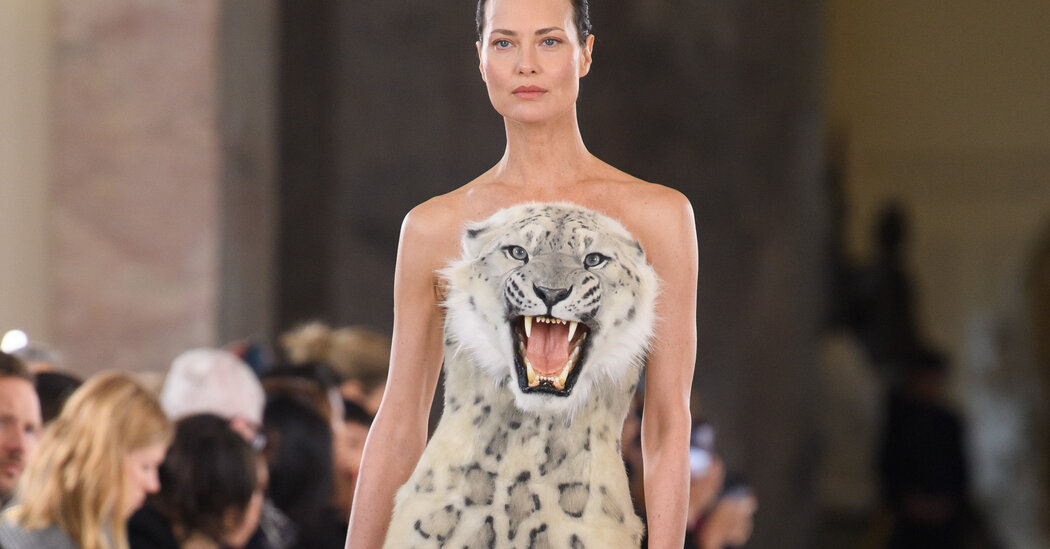 PARIS — Ten a.m. on a frigid Monday morning, the first day of the couture shows, and Kylie Jenner was strutting through the marble halls of the Petit Palais trying to find her seat for Schiaparelli, shoehorned into spiky stilettos and a black velvet one-arm gown, a full-size tawny lion’s head jutting from the side. It was if Aslan had taken a break from Narnia and stuck his muzzle through a time-space continuum under her armpit. Or maybe it was Take Your Stuffed Toy to Work Day?

Nope: It was a dress so hot off the runway it hadn’t even appeared on the runway yet — though it was about to, along with a strapless faux-fur sheath with a snow leopard head jutting from the bust, its mouth open in mid-roar, and a big, hairy black silk and wool coat with a wolf’s snout emerging from the shoulder.

Painstakingly sculpted from resin, painted by hand in the couture atelier, the faux animal heads were supposed to represent the vices of Dante’s “Inferno” — lust, pride, avarice — according to the Schiaparelli designer Daniel Roseberry. He used the poem as something of a metaphor for his own experience with the pressure to create the new; to make everyone sit up in wonder.

To carve out a space in the attention economy. If social media and the red carpet are the fire of fame, Mr. Roseberry said, couture has become fashion’s “gasoline”: pour it on top and the conflagration gets ever hotter. It is “culture-making,” he said. Or outrage stirring. These days, the two ideas can seem one and the same (file them under “provocation”).

So the fake animal heads collided with real animal rights and Jenner/Kardashian mores, and for a time the explosion swallowed the digisphere whole. Were the looks promoting big game hunting, even though they didn’t come from nature, or were they celebrating the beauty of the wild, as PETA declared, and facilitating “an anti-trophy-hunting dialogue”? Were they actually a metaphor for going after the rich — hunting them, eating them, selling to them — or were they a gimmick gone wrong?

Objectively, they were kind of silly, and the whole hoo-ha verged on the surreal (which makes sense for Schiaparelli, a house rooted in surrealism). But in their viral ubiquity, they also set the tone for the week, and the shows that unspooled thereafter.

Not just because Chanel also had an animal theme, courtesy of the artist Xavier Veilhan, who created a giant movable plywood bestiary for the set, in reference to Coco’s favored menagerie. But because the drive to capture not just hearts and minds but eyeballs may explain the designer Virginie Viard’s otherwise puzzling addition of circus-master bow ties and top hats to her flirty bouclé skirt suits; narrow, floor-sweeping coats; and drop-waist chiffon and feather frocks.

Interviews With the Oscar Nominees

Also the upscaling of Giambattista Valli’s rose-colored taffeta and tulle creations, which resembled nothing so much as sugar plum fairies on steroids. Maybe even Giorgio Armani’s 77 iterations of harlequins.

Once upon a time the couture was a closed world — that teeny tiny segment of fashion designed to showcase the art of the handmade, ruled by arcane requirements and priced so high it was accessible only by the very few: the apocryphal 200 global clients who were willing to pay the equivalent of an entry-level annual salary (and up) for a dress most of the world would never see. The price justified by artistry, know-how and the idea that what couture designers did trickled down into the wardrobes of everyone else.

Prepandemic, the party line was that couture was a social media-safe space, because it demanded the intimacy of personal experience. Now, however, powered by the gaze of the global crowd, it has begun to morph into something else. Darwin would understand

Sure, there are still those who delight in the subtlety of a garment so mysteriously constructed it reeks of ineffable ease: the gold fil coupé Bar jackets and straight skirts Maria Grazia Chiuri offered up at Dior that somehow managed to retain their exacting shape with no interior boning; her crushed velvet bathrobe coats, gleaming with plush insouciance. In a preview, Ms. Chiuri said she had been inspired by the story of the former Dior client Josephine Baker, and her set was wrapped in paintings by the American artist Mickalene Thomas of 13 barrier-breaking women of color. It could have been heavy-handed, but instead the collection just riffed on a 1920s line, a smidgen of Jazz Age decadence woven into the cloth, the result sitting lightly on the body.

Such understatement has a power of its own, even in a moment of boldface names in pursuit of the visibly fabulous.

But it is the desire to be, said Jordan Roth, the theater impresario, collector and occasional model, “a singular piece of art on legs,” that makes couture — especially in January, as awards season gets underway — the ultimate celebrity dress-hunting ground (and the ultimate place to hunt celebrities; see the crowds outside the show venues, which resemble nothing so much as crowds outside concert venues, shrieking and waving their smartphones). A popular game has become guess who will wear what to the Oscars/BAFTAs/Césars. Everyone can play.

At Dior, odds are the cowled sleeveless gowns fully embroidered in gleaming gold and silver thread, the jewel-tone velvets channeling a siren draped languidly over a piano, will be coming soon to a red carpet near you. Ditto Chanel’s filigree white lace number with a bit of gold embroidery gleaming at the throat.

As for what the best actress nominee Michelle Yeoh, front row at Armani Privé, might choose from among all the diamonds and ruffs sprinkled over a collection that ranged from court jester to Picasso via trousers flapping an extra fabric fin at the side, caviar-bead cropped jackets and shimmering sequined gowns, there were some less — well — tricky, options.

But the danger in the current game of one-upmanship is that the clothes sometimes tip into the ridiculous. At Schiaparelli, Ms. Jenner (who also sat front row at Maison Margiela, where John Galliano delivered his patented brand of upcycled mayhem by mashing together tulle, tartan, fishnets, Mickey Mouse and Pendleton outerwear) and her lion head managed to overshadow not only Doja Cat, who arrived covered in 30,000 ruby crystals like some sort of émigré from an Avatar-themed Met Gala, but also the fact that there were parts of the collection that verged on the sublime.

The opening look’s jacket, for example, made from hundreds of encrusted sequins tracing a perfume-bottle silhouette, over simple black pants. A pinstripe trouser suit that played with proportions so that jutting shoulders created the illusion of a Mr. Pearl-size waist, but without the rearranged organs. Breast plates made from abalone, precious stones and lemonwood marquetry that soared upward toward the throat and stretched the very definition of material.

Once all the smoke from the wild kingdom controversy had cleared, they were a reminder that sometimes, when you pour gasoline on a fire, you risk getting burned.