COP26 in the balance with countries split 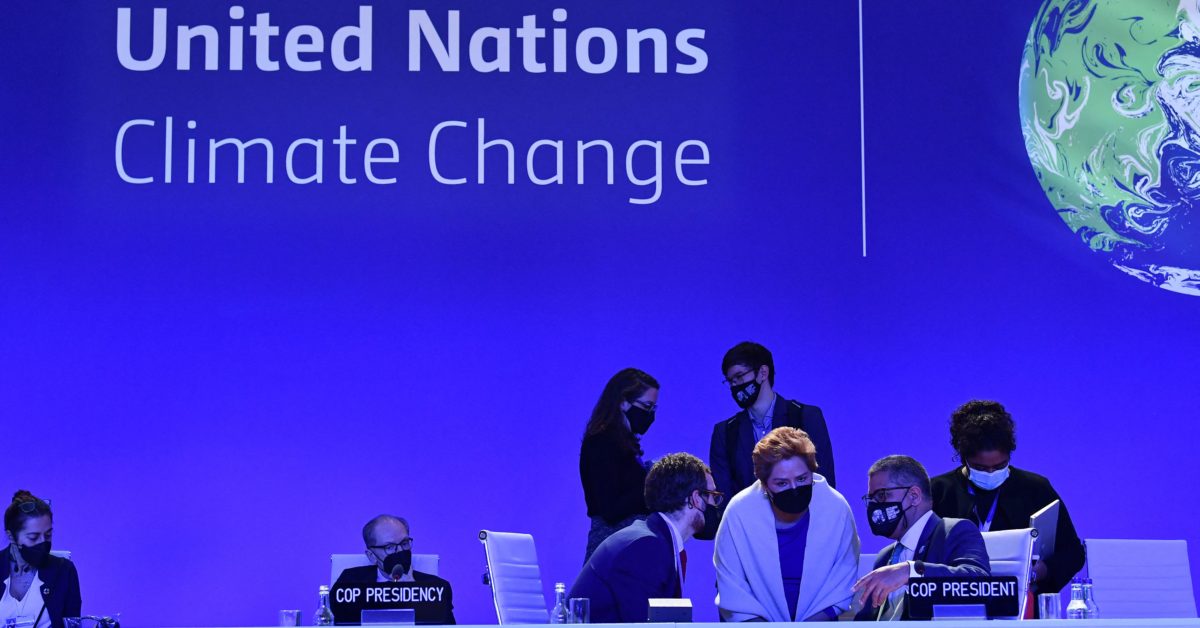 GLASGOW â€” The U.N. climate talks went into overtime on Friday evening as fights emerged over coal, subsidies for fossil fuels and who pays for the damage caused by climate change.

At a lunchtime meeting of ministers and negotiators from almost 200 countries, clear dividing lines emerged for the endgame of the two-week conference that the U.K. hosts had hoped would deliver on a goal of limiting global warming to 1.5 degrees Celsius. Instead, the national pledges submitted ahead of the Glasgow meeting mean the planet is on a path for around 2.4 degrees of warming.

â€œWe need to all get back to work â€¦ the eyes of the world are upon us,â€ he said as he expressed hope an updated text would be agreed later on Friday night.

The final deal is now about getting out of Glasgow with commitments to do more in the near term. In a draft released on Friday morning, the U.K. proposed countries return with new climate pledges next year to try to close the gap between what they have promised and what is needed to meet a 1.5-degree target.

China appeared resistant, with Vice Minister of Ecology and Environment Zhao Yingmin demanding that countries be allowed to â€œdecide on their own the roadmap and timetable for their national policies.â€

The draft also pushes countries to phase out coal power. Acting explicitly on coal has been rejected by China, Saudi Arabia, Australia and India in recent weeks.Â

Saudi Arabia also objects to a proposed end to â€œinefficientâ€ fossil fuel subsidies; its massive oil and gas industry relies on government aid. But in a speech to the conference, U.S. climate envoy John Kerry said continuing to pour billions into coal, oil and gas was â€œinsanity.â€

â€œHow could we possibly in 2021, knowing what the evidence is, be wishy-washy on that subject? Those subsidies have to go,â€ Kerry said, adding those incentives â€œfeed the very problem we are trying to cure.â€

A major fight continues in the closed negotiating rooms of the Glasgow conference center over assistance for developing countries hit by climate-driven disasters â€” called loss and damage.

â€œIt’s time to move and find the solutions that will help vulnerable countries respond to the damage and destruction the climate crisis has already caused,â€ said EU Green Deal chief Frans Timmermans.Â

But the EU, and in particular the U.S., have been reluctant to back a developing country proposal for a clear commitment to supply future funding for impacted communities. They worry that approving broader claims of historic responsibility for causing global warming would be a blank check to cover the enormous damage climate change is already causing around the world.Â

Those divisions meant that countries ran past the formal end of the conference on Friday evening â€” nothing unusual for climate summits. Now negotiators are preparing for a marathon, sleep-deprived debate that could still seal a deal or end in failure.

It’s not just loss and damage. There are also disputes over setting up a global carbon trading mechanism, financing mitigation and adaptation to climate change, whether fossil fuels should be mentioned in the final text, deadlines for filing updated climate action plans and how transparent countries will have to be on their climate efforts.

For a deal to happen, all those intricate elements will likely have to be traded against one another in the final hours, said Alden Meyer, from the E3G think tank.

“This is a package. And it’s very clear that if U.S., EU, Japan and others continue to block action on loss and damage, they’re going to make it much easier for the hardline opponents of mitigation and transparency to bring the vulnerable countries over to their side and the result is we get a least common denominator output,” he said.