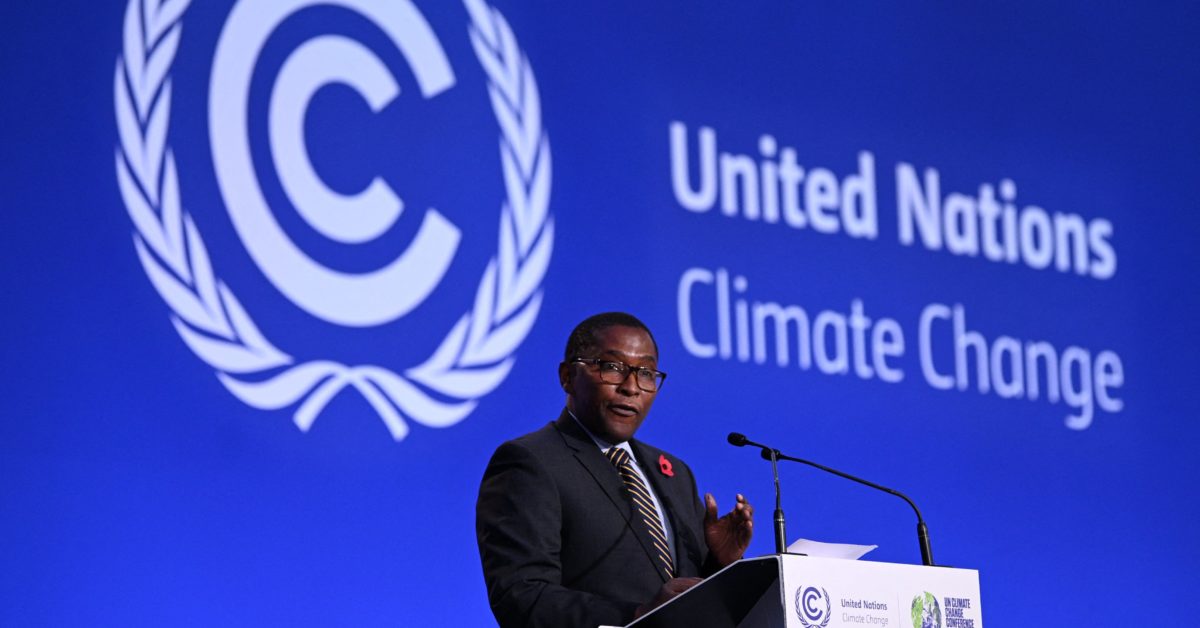 GLASGOW â€” The first week of the COP26 ended with a dizzying and disparate array of pledges â€” now the challenge is tracking exactly where that leaves the push to tackle climate change.

Rather than framing an overarching deal among all 197 signatories of the global climate pact, the U.K. hosts of COP26 spent the week trotting out a series of ad hoc alliances â€” although that raises the issue of whether those pacts are iron-clad or simply wispy green promises.

The new efforts span some of the most consequential steps to slow global temperature rise. They include vows to cease using coal for electricity, end deforestation, cut finance for coal, oil and gas, shift trillions of private finance dollars from fossil fuels to clean energy and drastically slash emissions of methane, a potent greenhouse gas that is second-most responsible for the 1.1 degrees Celsius of warming the world has seen over the past century.

That’s led to some optimistic assumptions about their impact.

The initiatives â€” combined with countriesâ€™ existing climate pledges â€” could limit warming to 1.8 degrees Celsius if they are all fully realized, International Energy Agency chief Fatih Birol claimed on Thursday. That’s in stark contrast with U.N. accounting, which says that national climate targets â€” known as nationally determined contributions or NDCs â€” agreed under the Paris pact will warm the world by 2.7 degrees above pre-industrial levels by 2100.

Special Adviser to the U.N. Secretary-General on Climate Action Selwin Hart said: â€œFatih, I heard your numbers but â€¦ we cannot be complacent, we cannot celebrate before weâ€™ve done the job.â€Â

The U.K. hosts argued this week marked the start of something real and irreversible in the global economy. But past pledges offer a warning.

The 2014 New York Declaration on Forests was supposed to halve deforestation by 2020. It didnâ€™t. Twelve years ago, rich countries promised to supply $100 billion a year in climate financing by 2020 â€” they missed that mark by a wide margin and aren’t expected to hit their target before 2023.

One of the most controversial initiatives is an alliance built by former Bank of England Governor Carney under which institutions controlling $130 trillion committed to shifting their investments away from fossil fuels and spur clean energy projects around the world. Carney and his co-chair Michael Bloomberg called it the â€œgold standard for climate commitments.â€

That was met with suspicion from green groups and some governments that financial institutions were benefiting from the green gloss of the COP26 conference without having to submit to accountability and change.

British officials worried that Carney’s Glasgow Financial Alliance for Net Zero (GFANZ) would bring integrity questions to the heart of the conference. Gore said that Carney is â€œkeenly awareâ€ of the transparency issues.Â

Carney told Bloomberg News that he will â€œruthlessly, relentlesslyâ€™â€™ focus on getting members to live up to their net-zero promises.

GFANZ is a part of the Race to Zero umbrella, established by the U.K.’s High Level Champion for Climate Action Nigel Topping. He set up a peer review system, run through Oxford University, for the pledges made by companies and institutions.

Despite assurances from Carney and Topping that there would be a process for maintaining the integrity of their initiatives, U.N. Secretary-General AntÃ³nio Guterres began the week raising concerns about a â€œdeficit of credibilityâ€ in the commitments being brought forward by the private sector and saying he would establish a â€œgroup of expertsâ€ to assess them and set standards.Â Â Â  Â Â Â  Â Â Â

The credibility gap extends beyond the private sector to the many countries signing up to various pacts.

Brazil joined the effort to cease deforestation globally by 2030. Thatâ€™s despite the government of President Jair Bolsonaro’s overseeing rampant illegal land grabs and giving winks and nods to ranchers and agricultural interests to raze portions of the Amazon rain forest for more land.

â€œBolsonaro has zero credibility on any climate pledge he makes. I would love to be surprised, but I don’t expect to be. He has made pledges in the past and broken every one of them,â€ Gore said. â€œI wouldn’t lump other countries in with Bolsonaro. Nevertheless, it’s true that there have been pledges in the past that were not always met.â€

Other countries had morning-after regrets.

Indonesiaâ€™s Environment and Forestry Minister Siti Nurbaya Bakar criticized the forest pledge her country had signed as â€œunfair.â€ Poland signed the coal phaseout pledge but argues that didn’t conflict with its plans to end coal power only in 2049.

â€œThese announcements may generate headlines but assessing their true worth is hugely difficult, especially at speed during a COP meeting,â€ said Mohamed Adow, director of energy and climate think tank Power Shift Africa. â€œThey are eye candy but the sugar rush they provide is empty calories.â€

For now, the deals carry no penalty if they’re broken â€” which is in line with the broader thrust of global climate policy. But unlike the annual climate talks and NDCs, thereâ€™s no annual forum to apply public pressure and accountability for the new pledges.

COP26 President Alok Sharma said: â€œHaving signed up to these commitments, obviously, everyone will hold individual countries to account.â€ But he could not point to any mechanism emerging from COP26 that will perform that role. A U.K. official later clarified that the government intends to use the coming year, in which it will retain the U.N. climate presidency, to set up some accountability systems.

Despite the doubts hanging over the pledges, they at least allow the British hosts to claim some movement on climate in Glasgow.

The U.K. realized early in the organization of COP26 that a conference that simply finalized disputes over the rules that govern the 2015 Paris Agreement would not meet the demands of science or a public urgently looking for more from leaders. The answer was to â€œlet a thousand flowers bloom,â€ said several U.K. and European officials.Â

â€œThere is no premeditated geopolitical strategy here. If the best is not available, you go for the second-best. The alternative cannot be zilch,” said an EU diplomat.

There’s also hope that technology will fill some of the governance gaps; satellites will be able to sniff out methane leaks to police the pledge calling for 30 percent economy-wide methane reductions this decade.

â€œNone of the stuff that we tout or that we really get excited about, even things that we think are truly binding â€” they’re not really binding. I mean, what are you going to do for a country that doesn’t adhere to something?â€ said Jonathan Banks, international director for super pollutants with the Clean Air Task Force, which supports the methane pledge.Â

â€œNonetheless, these things still have an impact in moving policy forward,â€ Banks added.