Could Skin Patches Be the Future of Covid Vaccines? 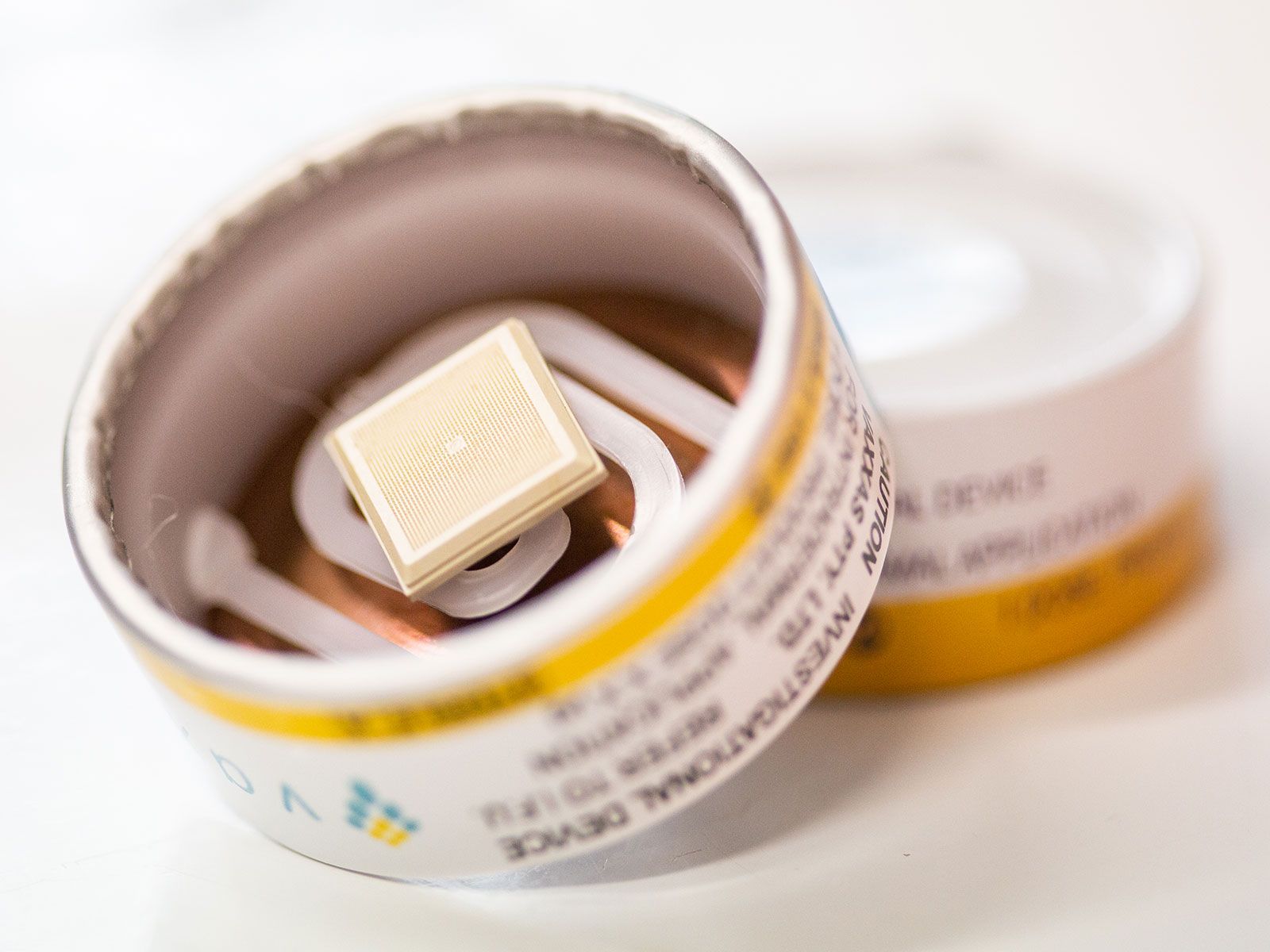 Around the world, an estimated 49 percent of individuals have received at least one dose of a Covid-19 vaccine, but billions more are still waiting for a shot.

Just five of Africaâ€™s 54 nations are projected to hit the World Health Organizationâ€™s year-end goal of fully vaccinating at least 40 percent of their residents,Â according to an October 28 statement. Shortages of syringes and a lack of access to cold storage refrigeration remain major barriers.

But researchers are working on new Covid-19 vaccines that could be kept at room temperature and given without a traditional needle and syringe. The latest is described in a study published today in Scientific Advances.

A team at the University of Queensland in Australia has developed a skin patch vaccine for Covid-19 thatâ€™s administered with the click of a small, round applicator device to the upper arm. The solid plastic patch is smaller than a fingernailâ€”just 7 by 7 millimeters. On it are 5,000 needlelike projections that enter the skin and deposit the vaccine into the upper dermal layers. Unlike a typical needle, these ones are so tiny that they donâ€™t draw blood or trigger the nerve endings that sense pain. The technology is known as a microneedle patch, and is used to deliver insulin among other drugs. This latest iteration, designed to protect against Covid-19, has only been tested in mice.

The scientists made the vaccine by using a nitrogen jet-based drying process to turn a stabilized version of the coronavirus spike protein into powder. They then coated the projections on the patch with the powdered spike protein. In lab tests, they found that the vaccine patch remained stable for up to month at room temperature and up to a week at 40 degrees Celsius, or around 104 degrees Fahrenheit. In mice, the patch produced higher levels of neutralizing antibodies against SARS-Cov-2 than vaccines delivered by a needle and syringe.

â€œWe got fantastic responses,â€ says David Muller, an author on the paper and a senior research fellow at the University of Queensland.

The vaccine patch works by delivering the spike protein to the epidermis. This top layer of skin contains a vast network of specialized immune cells that provide a barrier against bacteria and viruses. These cells act as sentinels for the rest of body, sending signals to other cells when they encounter an invading pathogen.

â€œThe skin is a particularly good place to give a vaccine,â€ says Mark Prausnitz, director of the Center for Drug Design, Development and Delivery at Georgia Tech, who wasnâ€™t involved in the new study. â€œOur skin is the interface for the body and the outside world, so itâ€™s expecting to encounter pathogens now and then and it understands the need to mount immune responses.â€

Previous studies in animals have shown that skin patch vaccines for other infectious diseases can generate higher levels of antibodies than traditional vaccines that are injected into the muscle. Prausnitz notes that the only infectious disease ever eradicated, smallpox, was done so with a skin vaccine. The smallpox vaccine was administered by puncturing the skin with a two-pronged needle that had been dipped in the vaccine solution.

Though the University of Queensland vaccine doesnâ€™t use a needle in the traditional sense, it does produce a sensation when pressed against the skin. Muller says the applicator feels like a â€œsolid flickâ€ against the arm. â€œYou remove a foil seal, it goes onto the arm, you leave it there for 10 seconds and then you remove the applicator,â€ he explains.

Like with any vaccine, the patch may still leave your arm feeling sore because it delivers an agent thatâ€™s meant to stimulate an immune response. The patch also produces some redness that usually goes away over the course of a few days.

â€œIt looks very promising,â€ says Jason McClellan, a structural biologist at the University of Texas at Austin who helped design the version of the coronavirus spike protein that the Queensland researchers used in their vaccine formulation but wasnâ€™t involved in the study.

McClellan says a vaccine that doesnâ€™t require cold storage would be a boon to less affluent countries, where access to electricity to power refrigeration is spotty or sparse. â€œThat’s a big advantage over the mRNA Covid-19 vaccines, which require low temperatures,â€ he says. â€œIn many parts of the world, having a cold chain is difficult to maintain.â€

Muller envisions that patch vaccines could eventually be sent through the mail or even delivered by drones in hard-to-reach places without reliable cold storage so that individuals could self-administer them.

Other groups are working on shelf-stable vaccine patches that donâ€™t require an applicator and would simply stick onto the skin like a Band-Aid, then disappear. These would be virtually painless compared to the University of Queensland teamâ€™s solid patch. Researchers at the University of Pittsburgh and Carnegie Mellon University have engineered a fingertip-sized patch that has 400 tiny needles of sugar and protein pieces which dissolve into the skin after delivering the spike protein. In mice, the Pittsburgh teamâ€™s vaccine produced antibodies at levels thought to be enough to neutralize the coronavirus.

Scientists from Stanford and the University of North Carolina at Chapel Hill, meanwhile, are collaborating to make a 3-D-printed vaccine skin patch for Covid-19. The small, dissolvable patch elicited an antibody response in mice that was 50 times greater than a vaccine injected under the skin.

Skin patches to deliver drugs have been studied for decades. A wide variety of drugs are now available in patch form, including nicotine and contraceptive patches. In recent years, thereâ€™s been more interest among researchers to develop vaccines delivered this way.

Beyond having advantages in resource-poor settings, skin patch vaccines could also help encourage vaccine adoption in other places. Prausnitz thinks more individuals would get the flu vaccine every year if it was less painful and easier to access. â€œThere’s a real motivation to make it appealing for people to go get it,â€ he says. â€œWhat if you could pick up your patches at the grocery store on your way home and bring them home to your family?â€

For children and adults who wince at the sight of needles, a skin patch could be a less painful and scary option. A study published in May by Gavi, the Vaccine Alliance found that a fear of needles may be a key factor for around 10 percent of individuals who havenâ€™t gotten a Covid-19 vaccine.

Skin patch vaccines for flu, or Covid-19 for that matter, arenâ€™t likely to be widely available for another few years. None of the patch vaccines in development for Covid-19 have been tested in humans yet. The University of Queensland team is aiming to begin an initial clinical trial next year with its partner Vaxxas, the Cambridge, Massachusetts-based biotech company thatâ€™s manufacturing the applicators and patches.

Though skin patch vaccines for Covid-19 may still be a few years away, Prausnitz still thinks itâ€™s worth investing in them. Many experts predict that the coronavirus will become endemic, and itâ€™s possible that booster vaccines will be needed regularly. An easy-to-apply, shelf-stable vaccine option could help ensure that more of the worldâ€™s population is vaccinated.