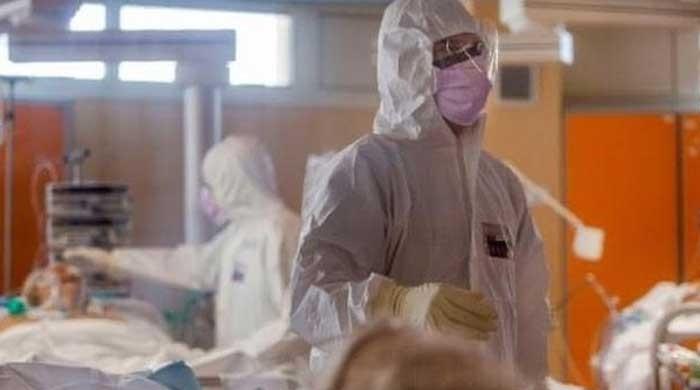 The Economic Coordination Committee of the Cabinet on Wednesday gave a nod of approval for a Rs480 million package to pay a “risk allowance” equal to one pay to frontline healthcare workers fighting coronavirus.

“In order to pay the risk allowance, equal to one pay to all health care workers performing duties related to COVID-19 in the Federal Government, decided by the Prime Minister as Chairman National Coordination Committee on COVID-19, in the meeting held on 26th March 2020, ECC approved an amount of Rs.480.556 million (financial impact from 1st April 2020 to 30th July 2020) to meet the requirement,” read a statement by the finance ministry.

It said that the amount will be paid out of the Rs50 billion fiscal stimulus package allotted by the prime minister, via a technical supplementary grant.

As many as 3,432 employees from 10 government health institutions will benefit from the scheme.

“The situation will be reviewed after 4 months for the continuity of the allowance,” according to the statement.

The ECC, met in Islamabad with Prime Minister’s Advisor on Finance Dr Abdul Hafeez Shaikh in the chair.

The ECC was given a briefing on wheat procurement. It was told that so far, “PASSCO and provincial food departments have procured a quantity of 6.5 million tonnes or 80% out of the assigned target of 8.25 million tonnes”.

The procurement by PASSCO and the Khyber Pakhtunkhwa government shall continue until the end of the month.

The prime minister’s Kamyab Jawan Programme also came under discussion. According to the statement, ECC approved a change in key terms for the programme “to provide relief to small and medium enterprises during the ongoing pandemic situation”.

A capital increase of $10.9 million for the Bangladesh operations of National Bank of Pakistan was also approved. This was done to meet the “the minimum capital requirements prescribed by the Central Bank of Bangladesh for the year 2019 and to create some cushion in equity for 2020”, said the finance ministry statement.

Furthermore, an approval for the electric vehicle policy for 2-3 wheelers and heavy commercial vehicles was also given by the ECC.

“The meeting also approved supply of 10,000 metric tonnes of wheat to World Food Programme for emergency relief operations and allowed import of wheat by the private sector for unlimited period after waiving different taxes and duties,” said the statement.

“ECC also directed to remove restrictions on the movement of wheat and flour within the country and banned exports till next recommendations,” it added.