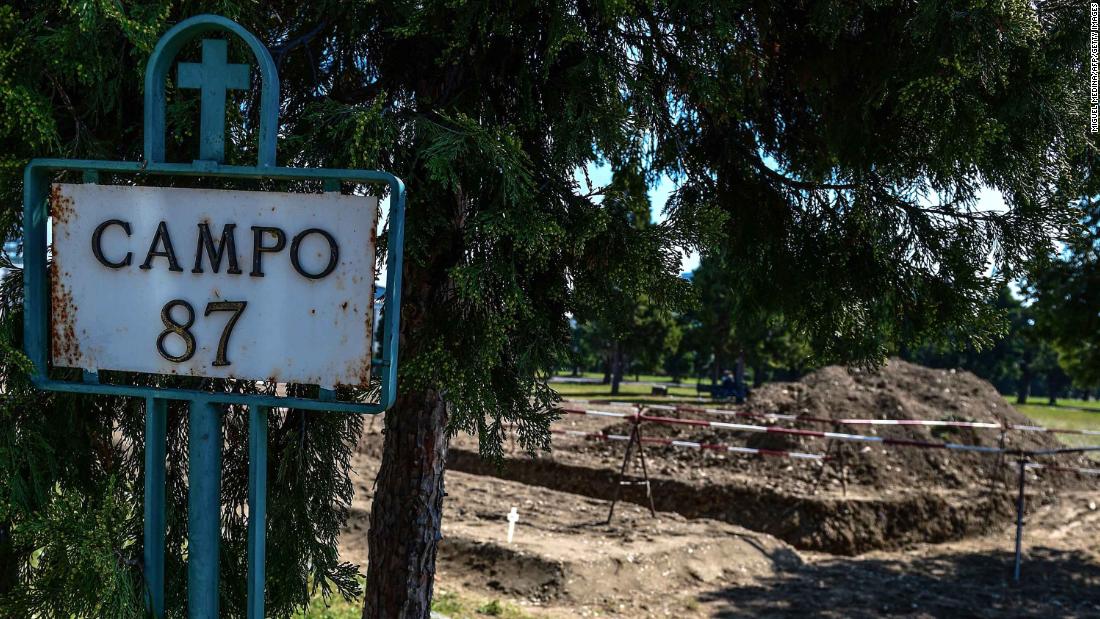 Here lie those who succumbed to coronavirus in Milan, but whose bodies have yet to be claimed.

An official at the cemetery, who requested that his name not be used, told me most of them were old and had been in nursing homes. Many, he added, had no families. In a few cases, the families of the dead have been unable to claim the bodies because of the lockdown.

With morgues filled to capacity, and more dying each day at the peak of the outbreak, authorities in Italy’s coronavirus hotspots had little choice but to bury the unclaimed dead like this. If their families come forward to claim the bodies once the epidemic is over, the remains will be exhumed and reburied.

Those laid to rest here died alone. Then again, with coronavirus, almost everyone dies alone.

Carla Porfirio wanted desperately to be with her mother in her final moments.

Before the coronavirus outbreak, she visited her 85-year-old mother Michela, who suffered from Alzheimer’s disease, every day in Milan’s sprawling Palazzolo-Don Gnocchi Institute nursing home.

When the nursing home abruptly stopped relatives from visiting their loved ones as the virus spread, Porfirio said she called every day to ask about her mother. Every day the staff reassured her Michela was fine.

Porfirio is concerned that she wasn’t told when her mother first became unwell. When she called the home on Sunday April 5, she was informed that Michela had been put on oxygen and given morphine.

She died the next day.

“What’s so tragic for those of us who lost their loved ones,” Porfirio told CNN, her voice breaking with emotion, is that “we couldn’t be close to them in their last days as they suffered. They needed the hand of their loved ones.”

At the height of the pandemic’s rampage through northern Italy, the regional government of Lombardy asked nursing homes to make room for non-critical Covid-19 patients, to lighten the massive burden on hospitals.

Porfirio said the Palazzolo-Don Gnocchi nursing home put one of those patients in the same room as her mother and two other older women.

When Porfirio protested, she says a staff member told her the home had no choice; it had run out of space.

The Palazzolo-Don Gnocchi Institute told CNN in a statement that “starting from the detection of the first case … at the Palazzolo Institute, the Don Gnocchi Foundation started the isolation, mapping and swab testing procedures on contacts exposed to the risk of contagion … All Covid-19 positive cases were handled according to the protocols provided by the authorities, and in coordination with the authorities themselves.”

The institute did not respond to Carla Porfirio’s claims regarding the care of her mother.

Italian authorities are investigating a string of health violations at elderly care homes across the country during the Covid-19 crisis.

The Palazzolo-Don Gnocchi Institute believes the investigation will show their work was proper.

“We are confident that the brief presented by the Foundation’s lawyers at the Milan Public Prosecutor’s Office and documents subsequently acquired by the judiciary will confirm the correctness of the Foundation’s work in the context of this health emergency,” it said.

The Lombardy regional government told CNN it is not giving interviews on “the nursing home issue,” due to the ongoing investigation.

At least 15 facilities have been closed and their patients relocated after inspections by the Italian Police health force — Nuclei Antisofisticazione e Sanita (NAS) — found that many failed to follow coronavirus protocols, including providing enough protective equipment for staff and dedicated quarantine areas for suspected coronavirus patients.

Like many who lost loved ones in nursing homes to coronavirus, Carla Porfirio is indignant.

“It’s uncivilized,” she says. “We’re in 2020 and this still happens? The images are like the Spanish flu epidemic 100 years ago. And we’re in the same condition?” she asks.

Not long ago, Alessandro Azzoni says his 75-year-old mother Marisa was physically strong and responsive, despite suffering from Alzheimer’s. He regularly took her for walks, for an ice cream, to dance in the park.

Now Marisa is in a critical condition, on life support, in a Milan hospital after being transferred from the city’s Pio Albergo Trivulzio nursing home.

Azzoni presented a diagram on his phone of his mother’s nursing home, based on information from doctors and nurses he said worked at the home. Much of the map is colored red, showing wards which now house Covid-19 patients.

The home is being investigated over multiple manslaughter complaints filed by staff and relatives of patients who say it failed to protect residents and medical workers against infection.

Milan’s Public Prosecutor Mauro Clerici said last month he was looking into “more than 100 deaths,” at the home during the Covid-19 epidemic.

Clerici said the inquiry would center on “what crimes may have been committed in accordance with existing legislation as applied to a pandemic.”

No arrests have been made and no one has been charged in the case.

A spokesperson for the Pio Albergo Trivulzio nursing home refused to comment out of respect for the investigators, saying they needed “to work freely and without pressures of any sort.”

Last month, a spokeswoman for the home told CNN that “the rules regarding masks were followed,” adding that the number of deaths in the first quarter of 2020 were in line with those in the same period last year.

Azzoni, who founded a group demanding a criminal investigation into what happened at Pio Albergo Trivulzio, describes it as a “massacre.”

With an investigation, he says “we have the opportunity to completely change things, to put humans back at the center.”

The region of Lombardy accounts for about half of Italy’s 32,169 dead from the virus.

One of the hardest-hit communities in Lombardy is the town of Nembro, in the foothills of the Alps.

Of the 87 residents in Nembro’s main nursing home, the Nembro Nursing Home Foundation, 34 died from the virus.

While law enforcement authorities won’t comment on whether the home is under investigation, its director, Barbara Codalli, told CNN there are no allegations of wrongdoing against the home which, she says, never took in any Covid patients.

As soon as staff realized that the virus had spread to the home, Codalli said: “We decided to shut down the structure to families and to close the day care, even if we didn’t know at the time what was actually happening, but with the feeling that something out of the ordinary was happening.”

“We started using PPE, masks, not easily because finding them was hard, we found them at absurd prices,” she adds.

But still, the home was overwhelmed by the virus, which Codalli said badly hit its staff, killing its president and one of its doctors.

She blames the provincial health authorities for being late in testing the nursing home’s residents.

The Lombardy regional government, which oversees the health authorities, would not comment citing the ongoing investigation.

Barbara Codalli notes that when the first cases became evident in the third week of February it took weeks for swabs to be carried out.

“The very first swabs were done the 10th of April,” she says, “regardless of what some were claiming on television.”

Nembro’s mayor, Claudio Cancelli, confirmed to CNN that the first swabs, from the home’s most severely ill patients, were taken beginning on April 10; he says that testing of all staff and the remaining patients only began on April 23.

In Nembro, we searched for death notices — but found only two recent ones. We called a funeral home to ask where we might find more. The undertaker explained the Nembro municipality had removed all but the latest ones, to avoid damaging morale in the town.

Mayor Cancelli confirmed that the death notices were removed, but denied that there was an official order to do so in order to boost citizens’ spirits. He insisted the decision had been based on common sense, adding that if doing so had improved morale, he was satisfied with that.

A set of notices from early March were found next to Nembro’s cemetery which showed that in the space of just three days — March 7 to 9 — five elderly men and women had passed away.

Funerals are finally being held again in Nembro as the lockdown in Italy eases.

‘A tsunami overwhelmed us’

Giacomo Boffelli, 84, died on March 11. Friends and family were finally able say their farewells two months later, at a simple ceremony near the entrance to the town’s cemetery.

His daughter, Nicoletta, read a statement. “We never abandoned you. We never would, because you will always be in our hearts.”

Giacomo’s widow, Margherita, sat and listened, the mask covering her nose and mouth moist from her tears.

After the ceremony, as Giacomo’s ashes were placed in the family tomb, Nicoletta told me: “The woman who works here at the cemetery says that all of this part was empty before, and now it’s filling up.”

Indeed fresh pictures mark the tombs of the recently deceased. Undertakers and grave diggers are the busiest people in Nembro now.

“It was as if a tsunami overwhelmed us, especially the oldest people,” says Nicoletta.

Spring has arrived in Lombardy. In the region’s towns and cities, people are venturing out to enjoy the weather and their first hints of freedom, as the lockdown eases.

Yet unlike other parts of Italy where coronavirus’ toll was lighter, in Lombardy a hint of sorrow hangs in the air.

Beppe Severgnini, a columnist for the daily Corriere della Sera, who lives in the hard-hit town of Crema explained: “It’s so sad. Every time I open the obituary pages of the local newspaper, I find so many people that I know have died. A whole generation is being wiped out.”