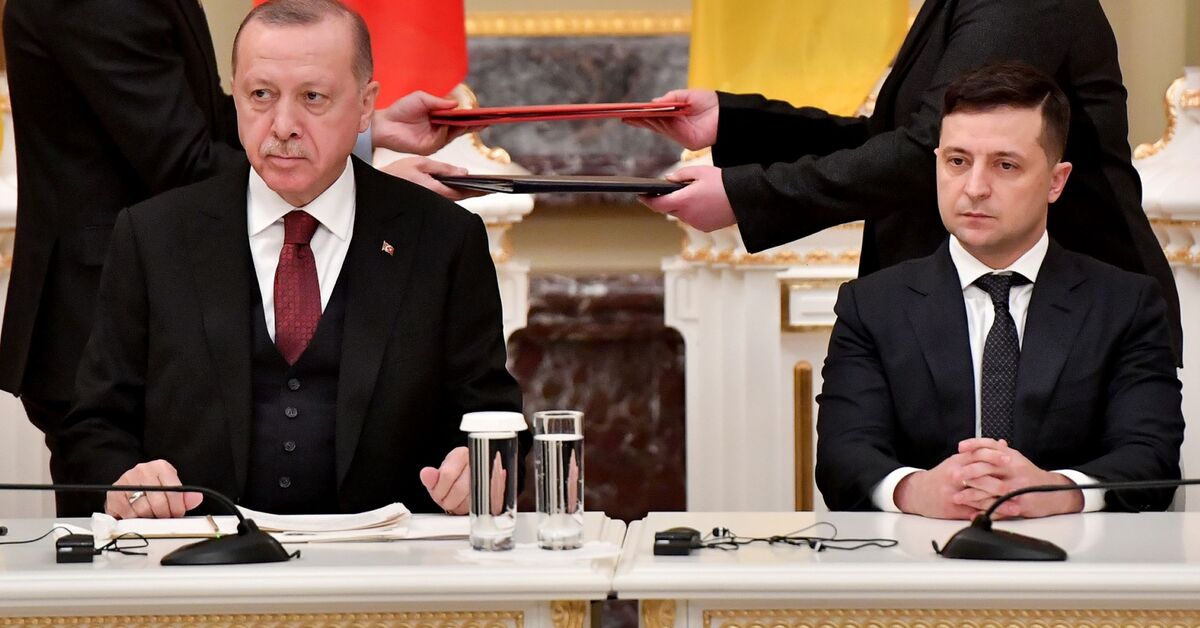 Turkish President Recep Tayyip Erdogan will travel to Ukraine on Feb. 3, enjoying the spotlight, and seeking to leverage his relationship with both his Ukrainian and Russian counterparts as a potential mediator to the current crisis.

Amberin Zaman, reporting from Vinnytsia, Ukraine, quotes the head of Ukraineâ€™s drone program as saying, â€œTurkey, not America, is commonly cited as the country that boosts Ukraineâ€™s flagging spirits the most and whose actions show that it isnâ€™t afraid of Russia.â€

In addition to the drone sales, â€œTurkeyâ€™s unstinting diplomatic support for Ukraine over Crimea is seen as vital,â€ explains Zaman. â€œTurkic Muslim Tatars were a majority until Stalin forced them out and millions of them resettled in Turkey. Ankara calls Russiaâ€™s annexation of Crimea an illegal occupation. Turkey is also a vocal backer of Ukraineâ€™s desire to join NATO, which Putin appears willing to risk a war to stop.â€

â€œPutinâ€™s capacity to bloody Turkeyâ€™s nose when he deems it in Russiaâ€™s interests is not in doubt,â€ adds Zaman.

A recent Russian-Syrian joint air patrol may not only have a been a signal in response to Israeli airstrikes on Syria, writes Anton Mardosov: â€œAmid tensions over Ukraine, Moscow is sending a signal to NATO that their military capabilities include the Middle East.â€

Russiaâ€™s military intervention in the Syria war changed the Russian military, especially its use of air power, the Washington Post reported this week.

â€œMoscow deliberately rotated as many forces as possible through Syria, at times on extremely short deployments,â€ the Post writes â€œAccording to theÂ Kremlin, all Russian ground troop commanders now have combat experience, as do 92 percent of military pilots.â€

In coming weeks, if the current trend continues, â€œthe Kremlin will concentrate an unprecedentedly large force in the Mediterranean Sea,â€ writes Mardosov.

â€œOn the backdrop of growing tensions and speculation over an imminent Russian invasion,â€ writes Rina Bassist, â€œCabinet ministries in Jerusalem prepare for the possibility that thousands of Ukrainian Jews would want to immigrate to Israel.â€

Ukraine, which has good relations with Israel, â€œhad even asked Prime Minister Naftali Bennett to speak on its behalf to Russia,â€ adds Bassist. â€œReports a few days ago revealed that when Bennett was preparing for his Sochi meeting last October, Kyiv reached out to Jerusalem and asked if it could assist in mediation with Moscow. Apparently, [Russian President Vladimir] Putin rejected this proposal and nothing came of it.â€

Oman Foreign Minister Sayyid Badr Albusaidi, in an exclusive podcast interview with Al-Monitor, says that dialogue underpins Omanâ€™s approach to regional issues, maintaining friendly ties with all key parties, and that inclusive diplomacy is key to solving the regionâ€™s conflicts and crises.

Five takeaways from our interview this week:

Omanâ€™s foreign policy is linked to its Vision 2040, which â€œaims at fully realizing economic and social realities, objectively foresight the future, and effectively guide planning in the upcoming two decades,â€ by promoting a stable environment for economic growth;Â fostering an outward-looking approach to find the right partners; andÂ developing structures for joint international collaborations.

Albusaidi says he is optimistic and confident in the â€œintegrity and good intentionsâ€ of all parties at the Vienna talks, and that the Joint Comprehensive Plan of Action (JCPOA) is critical for international and regional peace and security.

Albusaidi said that Yemen needs an immediate ceasefire and an ultimately Yemeni political solution involving the Houthis, who â€œneed to be engaged.” Isolating or designating them as a terrorist group, he said, could undermine diplomacy.

â€œIranâ€™s support for the Houthis is real, but perhaps overstated,â€ he said.

Referring to the recent Houthi attacks on civilians in the UAE, Albusaidi said that Oman stands with the US, UN and Omanâ€™s neighbors in condemning the escalation, calling for immediate de-escalation and a ceasefire.

Albusaidi said that Oman will be â€œamong the first to offer its active supportâ€ for a two-state solution to the Israeli-Palestinian conflict, referring to the â€œunresolved issue of Palestineâ€ as the â€œmost serious division and source of tension in the region.â€

Albusaidi said that Syria is a â€œcrucial playerâ€ in regional and Arab politics, and that â€œbringing it the back to the fold is a concept that ought to be embraced.â€ He added that isolation has not achieved progress, and that engagement may be more a promising means to encourage a reconciliation among the key Syrian parties toward a political solution.

You can listen to the full interview here.