Cruises sail into a new era of Covid self-policing 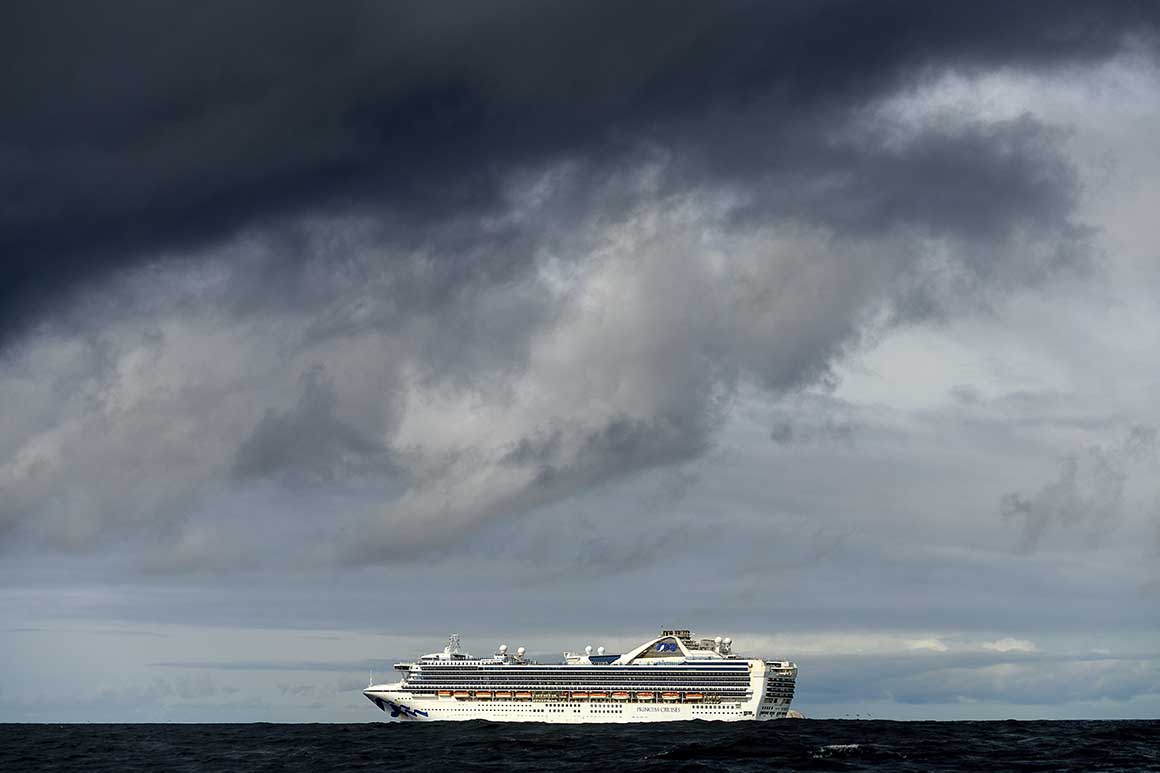 Itâ€™s the latest in a series of mixed messages from the CDC â€” not only about how safe it is to cruise but on a host of other Covid restrictions â€” as the agency copes with Omicronâ€™s onslaught. Itâ€™s also a stark example of the thorny decisions the Biden administration and other officials must navigate almost two years into the pandemic, as it tries to balance public health and a still-fragile economy.

â€œWe have to weigh what our opportunities are and how we protect our community members,â€ said U.S. Virgin Islands Health Commissioner Justa Encarnacion, who has the authority to determine what ships are allowed to dock in the U.S. territory. â€œWe negotiate with the cruise lines on an ongoing basis.â€

â€œI donâ€™t know how to describe it other than I just donâ€™t understand how theyâ€™re making decisions at the CDC,â€ Shalala said. â€œIâ€™m not being critical; Iâ€™m simply saying I donâ€™t understand. I think the cruise industry has done everything they can possibly do.â€

CDC Director Rochelle Walensky defended the agencyâ€™s decisions in a Senate HELP Committee hearing this week, saying federal officials and the cruise industry reached an agreement that will keep cruises on the water despite Omicron.

She said after the CDC prohibited cruise lines from docking in the United States, the industry â€œhas stepped up and is now interested in doing and exceeding … compliance with the sail order â€” without the order even necessarily being in place â€” is a testament to how that order has worked and our collaboration with the industry.â€

The state of cruising

In March 2020, the cruise industry was at a low point, regularly in the news with nightmare stories about how Covid ripped through passengers. Ships full of people went from port to port, looking to debark. The Diamond Princess infamously sat offshore in Japan for weeks while passengers and crew were infected before being evacuated.

As concern grew, the CDC issued an order that prevented cruise ships registered abroad â€” which is most of the global fleet â€” from docking in the U.S. As Congress contemplated bailouts, lawmakers rallied against help for an industry that registered most of its ships abroad and was seen as slow to react to the onset of Covid.

But even though most ships arenâ€™t registered in the U.S., its citizens make up by far the worldâ€™s largest market for cruising, and the CDCâ€™s â€œno-sailâ€ order, which prohibited ships from March 2020 to June 2021 â€” crippled the industry.

The CDCâ€™s prohibition essentially forced the industry to make nice. And in June, cruise companies agreed to CDC conditions that would let them sail again, including proving that the vast majority of not only crew but passengers on board were vaccinated.

But Omicronâ€™s virulent appearance just as vaccinations began to give people a taste of freedom presents fresh challenges.

As of Thursday, 91 cruise ships were reporting enough Covid cases to warrant a CDC investigation, which can result in increased reporting requirements and in extreme circumstances can warrant ordering a ship returned to port. Of the 109 cruise ships the CDC is tracking, only 12 are reporting zero Covid cases on board. Participation in these reporting requirements once the order is lifted will be voluntary but all major cruise lines have pledged to continue.

But unlike spring of 2020, calls to shut down cruises again are muted. Some lines had already canceled cruises for the 2022 season. Ships reporting significant numbers of Covid cases are barred from docking at many ports. And the major players in the industry mandate vaccines for everyone on board, including passengers â€” a standard that few industries can boast.

â€œWith broader access to vaccines, we are, thankfully, in a different place than we were back in 2020,â€ said House Transportation Committee Chair Peter DeFazio, (D-Ore.), who was a major critic of the cruise industryâ€™s safety rules at the onset of the pandemic. â€œHowever, CDC â€¦ must continue to closely monitor the risk to cruise passengers and continue to provide science-based guidance.â€

Even though CDC is ending its Covid restrictions on the cruise industry, the major industry players say they plan to keep their vaccine protocols in place.

The Cruise Lines International Association, the industryâ€™s lobbying arm, said their clients are the only segment of the travel and tourism industry that requires vaccination for almost all passengers and crew, and tests everyone on board.

â€œFurther, cruise is the only sector that continuously monitors, collects, and reports case information directly to the CDC,â€ said Bari Golin-Blaugrund, CLIAâ€™s vice president of strategic communications and public affairs. â€œGiven this oversight and the uniquely high vaccination rate required on board, the incidence of serious illness is dramatically lower than on land, and hospitalizations have been extraordinarily rare even during a time when landside hospitalizations are peaking.â€

Not everyone agrees, of course. Sen. Richard Blumenthal (D-Conn.) and Rep. Doris Matsui (D-Calif.) are opposed to rolling back the conditional sail order. Blumenthal called for a halt to all cruises on Dec. 28.

â€œPrematurely transitioning to a voluntary program could allow companies to skirt necessary public health measures,â€ Blumenthal and Matsui wrote to Walensky on Thursday, and urged the CDC to extend prohibitions on cruise ships.

The cruise industry won another battle in August, when a federal judge blocked a Florida law that prevented cruise lines from requiring passengers to prove theyâ€™re vaccinated, effectively allowing the industry to impose their own vaccine mandates. Conversely, the state of Florida was victorious in court in July after it challenged the validity of the conditional sail order, though the major cruise companies said they would follow the now voluntary rules.

â€œI donâ€™t believe any level of government should be telling businesses that you have to have a vaccine or that you canâ€™t ask if youâ€™ve had a vaccine,â€ said Sen. Rick Scott (R-Fla.) who said both decisions, a split decision for Republican Gov. Ron DeSantis, were beneficial for the industry and cruise passengers.

Sen. Lisa Murkowski (R-Alaska) said during a committee hearing this week that revoking the conditional sail order was critical for communities in her state that rely on summer cruise revenue to survive. She pushed Walensky to say publicly that the expiring rules would not be reimposed anytime soon.

Walensky responded that she does not anticipate reinstating the conditional sail order, but that predictions are impossible.

â€œWe anticipate this order will not be renewed and that the cruise industry will continue to understand that this is a really safe practice for those industries,â€ Walensky said. â€œWhat I can’t predict is what the summer will bring.â€

The current state of cruises in the age of Omicron has presented challenges for health officials like Encarnacion, U.S. Virgin Islands health commissioner.

On Dec. 28, Encarnacion denied entry to two cruise ships into the USVI because their positivity rates on board were above 1 percent, the threshold the territorial government allows for visiting ships.

Encarnacion said the CDCâ€™s requirement that cruise ships report positive cases on board, which remains in place despite the end of the conditional sail order, allows her to make informed decisions that balance public health concerns with the benefits an industry that directly employs thousands of USVI residents and contributes tens of millions of dollars to the economy.

â€œYou have to balance finance with health,â€ Encarnacion said. â€œWeâ€™ve learned how to balance that quite well.â€

Encarnacion said though her agencyâ€™s conversations with the cruise industry were at times demanding and â€œtough,â€ she understands that ships coming to the USVI contain passengers and crew who are nearly 100 percent vaccinated, her biggest concern for public health.

â€œThe cruise lines know what the risk factors are,â€ Encarnacion said. â€œThis is not only a risk to our community, but itâ€™s a very, very high risk to them.â€

Shalala said now that cruises are able to sail, they have a business incentive to tamp down on cases as much as possible. And this far into the pandemic isnâ€™t the time for the federal government to shut things down and inject more uncertainty for the cruise industryâ€™s employees.

â€œIt doesnâ€™t work for them if we turn the spigot off and on,â€ Shalala said.