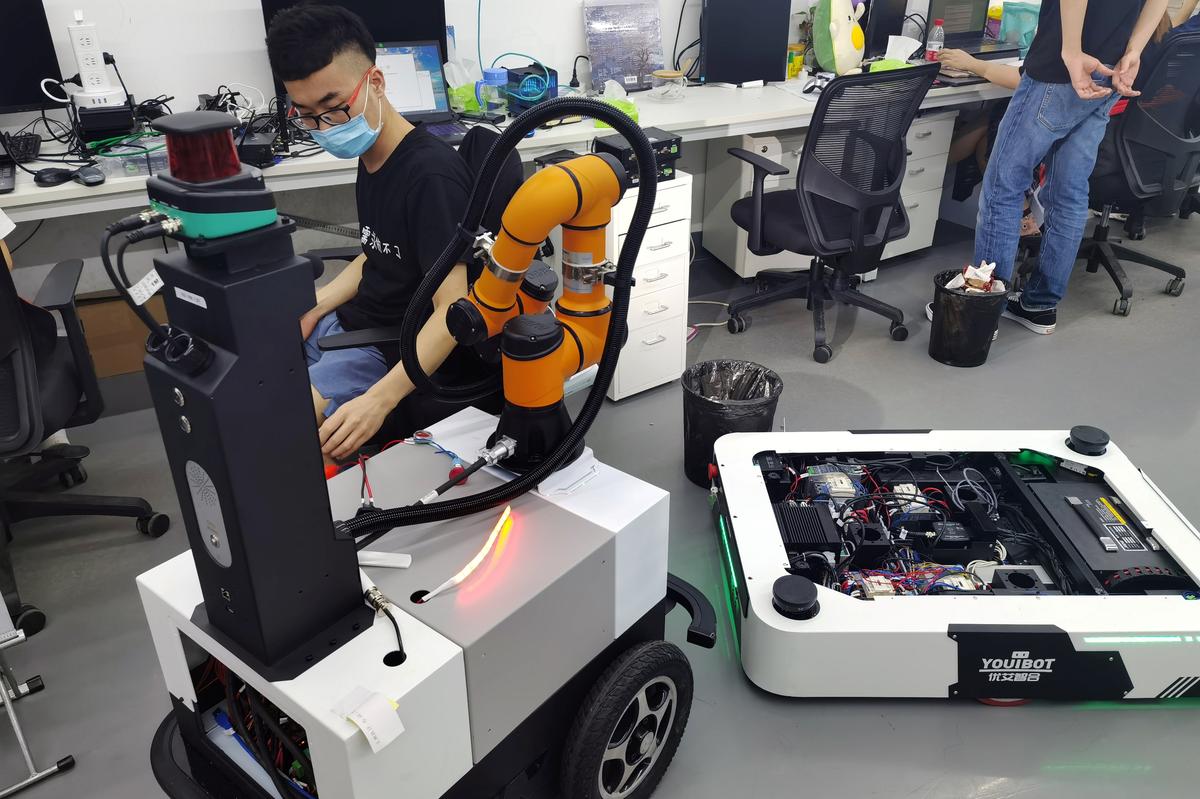 SHENZHEN, China (Reuters) – With glowing blue eyes and trusting feline features, a new robot cat by Chinese startup Elephant Robotics seems happily oblivious to the worries of CEO Joey Song as he shows it off at the companyâ€™s lab in Shenzhen.

A Youibot engineer, wearing a face mask following the coronavirus disease (COVID-19) outbreak, works on one of its automated guided vehicle designs in the robotics company’s engineering laboratory in Shenzhen, Guangdong province, China May 25, 2020. REUTERS/David Kirton

Elephant Roboticsâ€™ main business is the automation of factory assembly lines but revenue has plunged by a third this year due to the coronavirus, leading the company to cut staff by a fifth.

Due to the downturn, the firm is putting more energy into the robot cat project funded on Kickstarter in December. Readying its first large batch of 1,000 cats for sale, it hopes that as more consumers work from home, interest in pet robots will grow.

â€œIf the industrial robots canâ€™t sell right now, we just focus on other robots to lower the risks,â€ Song said.

Interest in robots has surged worldwide as the pandemic forces hospitals, manufacturing and services companies as well as governments to look afresh and with new urgency at ways to minimise human contact.

But in China, months ahead of many countries in reopening its economy and the worldâ€™s biggest market for industrial robots, new business seems largely limited to robots for warehouses and disinfecting. Most clients are now too spooked by the uncertain business climate to invest in expensive factory gear, industry executives say.

â€œAutomation should be a way to fight virus consequences but on the other side if you want to invest, you need to know the market forecasts,â€ said Vincent Bury, managing director at equipment maker CNIM China. â€œNobody has a crystal ball now.â€

Chinaâ€™s industrial robot sales tumbled by a fifth in the first quarter from a year earlier, according to Shanghai-based consultancy Stieler Enterprise. It predicts second-quarter sales will likely decline 15%.

While the pain is being felt widely, major players in China such as Switzerlandâ€™s ABB (ABBN.S), Japanâ€™s Yaskawa Electric Corp (6506.T) and Germanyâ€™s Kuka AG (KU2G.DE) are expected to weather the storm.

But for domestic robotic startups that have hitched their prospects to a broad shift within Chinese manufacturing to more automated factory lines, the rest of this year could be make or break. Access to fresh funding is tight as venture capitalists wait to see which firms will survive the immediate downturn.

â€œWeâ€™d love to wait for another one or two months (before investing) to see how theyâ€™ve recovered, whether itâ€™s going to get back to normal,â€ said the vice president of an investment firm with several interests in Chinaâ€™s robotics industry.

He declined to be identified to protect business relationships.

For startups that either specialise in or have managed to pivot to cleaning or warehouse-related robots, prospects have become brighter after more than a month of lockdown disrupted Chinaâ€™s supply chains and made fulfilling orders tricky.

Triooo is working to clear a backlog of orders and hopes to eventually sell in Western markets where its robots, used in places like hospitals and airports, are more cost effective due to higher labour costs there.

Beijing-based Geek+, a maker of robots that transport and stack goods in warehouses, opened its San Diego office in February just as supply chains in China ground to a halt. After three months of uncertainty, it suddenly saw demand soar as the spread of the virus spurred consumers to shift most of their shopping online, said Mark Messina, chief operating officer of Geek+ Americas.

At Youibot, which specialises in robots for power stations and furnaces, the outbreak prompted the company to develop a robot that can patrol public spaces, scanning body temperatures and emitting a virus-killing ultraviolet light when people are not around.

The Shenzhen-based startup has found buyers in Italy, Singapore and Turkey, while the American Institute of Minimally Invasive Surgery is also trialling a batch.

â€œThis productâ€™s biggest value to us is that it gives us experience deploying robots overseas and provides us with different ways for our business to develop,â€ said Youibot CEO Cody Zhang.