Culprits behind audio leaks to be exposed: PM 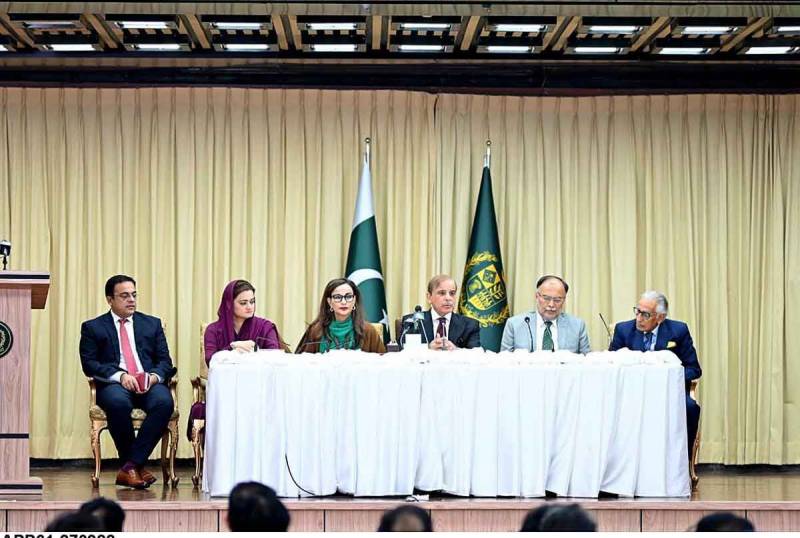 n Clarifies Maryam never talked to me about any favour n PTI chief doesn’t spare any opportunity in dividing Army and other institutions n No point of consulting opposition over army chief’s appointment n Elections to be held on time n Hopes Ishaq Dar will take initiatives to revive economy.

ISLAMABAD    –  Prime Minister Shehbaz Sharif on Tuesday announced to form a high-powered committee to probe the audio leaks involving conversations between key fig­ures of the government at his office terming the issue a “very serious lapse” of cyber security leading to the embarrassment of the country at diplomatic level.

The premier also said that the country has now come out of the international isolation as it was earlier pushed by the last Paki­stan Tehreek-e-Insaf (PTI) re­gime due to its flawed feign pol­icy and “stubborn” approach of ex-premier Imran Khan.

Addressing a forceful live press conference here at the Prime Minister House along with fed­eral ministers and his close aides, the premier in his candid talk spoke on a host of issues and looked confident and en­ergized hours after he reached the country following his visit to US and UK. He also used a good sense of humour during a very frank question and answer ses­sion.

Talking about the audio leaks, PM Shehbaz said that such a se­curity breach was a big ques­tion mark as to who will come to meet the prime minister at his office. Any one will think a hundred times before talking, he added.

“This is a matter of respect for 220 million people and the state of Pakistan,” he said.

“I have taken notice of it and a high-powered committee is be­ing formed to reach the depth of this matter,” PM Shehbaz said.

Despite many other audio leaks, a recording of PM She­hbaz had gone viral where he could be heard speaking with an official about the possibility of facilitating the import of Indian machinery for a power plant in volving Pakistan Muslim League-Nawaz (PML-N) lead­er Maryam Nawaz Sharif’s son-in-law. Responding to the mat­ter, the prime minister clarified that Maryam never talked to him about any favours rather his principal secretary Dr Tau­qeer Shah had spoken with him. “I was told that half of the ma­chinery was imported during the PTI tenure and the other could not be brought due to a ban and the matter would have to be taken to the Economic Co­ordination Committee and the Cabinet.”

The PM went on to say that he didn’t find it appropriate to take the matter to the cabinet. “Now tell me what is wrong with this?”

The premier said that the mat­ter was being blown on the me­dia out of proportion as sever­al audio leaks about Chairman PTI Imran Khan and his fami­ly had surfaced in the past and no questions were raised over them. He referred to an au­dio leak involving conservation between the property tycoon Riaz Hussain and his daugh­ter about giving a precious di­amond to the wife of Khan as a gift. He also talked about a ‘con­fidential’ agreement between the UK’s National Crime Agen­cy (NCA) and property tycoon regarding repatriation of assets worth 190 million UK pounds (Rs 50 billion).

He lashed out at former prime minister Khan for using brutal force to target opposition lead­ers and said that fake cases of corruption were framed against them but not a single penny of corruption could have been proved in the courts.

He said that Khan sold out the gifts of Toshakhana to pock­et millions of rupees and flout­ed rules by selling costly watch­es. He said that sugar and wheat scandals surfaced during the last PTI regime in which billions of rupees were looted by caus­ing a loss to the national kitty.

“I will apologize to the nation if I did something wrong.”

He further said that Khan also sold the Toshakhana gifts. He said that the PTI government even blackmailed the then chief of the National Accountabili­ty Bureau to frame fake cases against the opposition leaders and to get a clean chit in cas­es against them. The PM called chairman PTI Khan a liar, cor­rupt and ungrateful saying that he brought the economy of the country to the verge of collapse.

Shehbaz said that Khan did not spare any opportunity in dividing the army and institu­tions, highlighting that the PTI chief was creating polarization. “” I am very concerned that this polarization can bring the coun­try on the verge of destruction.”

Responding to a question about President Dr Arif Alvi’s proposal for bringing a consen­sus among all the political par­ties over the appointment of the new army chief, the premier said that he would follow the law and the law in this appoint­ment. However, he ruled out any consultations with PTI over this appointment.

“Did they consult us before giving an extension to the army chief?”

Replying to the criticism of PTI, the PM said that there was nothing wrong in consulting ex-premier Nawaz Sharif over the appointment of chief of army staff and other political is­sues as he was his leader.

Responding to another ques­tion regarding so-called secret meetings between the army chief and Khan, PM Shehbaz said that he doesn’t get time to look into matters other than the economy.

He also stated that there was no threat to the country and the elections would be held on time.

Talking about the PTI’s de­mand that it was ready to re­turn to the National Assembly if the matter of controversial dip­lomatic cable is probed, the pre­mier said that there was noth­ing in the cable that should be probed. He said that his meet­ing with Russian President Vladimir Putin in Samarkand proved that there was no feign conspiracy involved in the oust­er of Khan.

Replying to a question, the premier said that he had no re­gret that his party seized power at the cost of its popularity as he can sacrifice his politics to save the state.

Talking about the return of se­nior PML-N leader Ishaq Dar, Shehbaz hoped that the law­maker would work diligently and play his role in making the economic situation better.

PM Shehbaz said that Pakistan has come out of isolation due to this coalition government’s collective efforts. The last gov­ernment affected their foreign policy and upset our friendly countries, he added.

“The ex-prime minister thought himself to be Einstein,” he said, adding that this ap­proach hurt Pakistan a lot. He said that many friendly coun­tries had been annoyed with Pa­kistan due to Khan’s attitude. “It cannot reiterate those words that were said about the last government by some heads of states. It is a state secret.”

The PM said that he talked about the flood situation and highlighted issues of Kashmir, Palestine and Islamphobia at the United Nations General As­sembly and at the Shanghai Co­operation Organization (SCO) Summit in Samarkand.