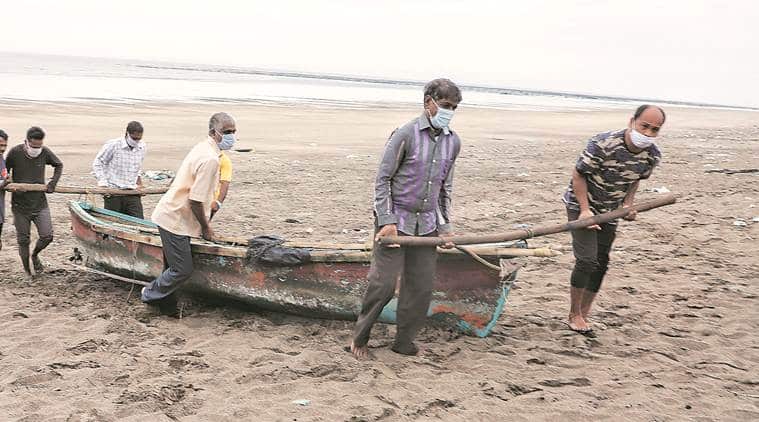 Fishermen take their boats to safety in Umargam taluka of Valsad in Gujarat. (Express photo by Javed Raja)

Dattatray Davne, 55, was out on the sea since Saturday, hoping to make up for the season lost during the lockdown. But the group he was part of was soon disappointed with the warning of cyclone Nisarga in the Arabian Sea and was forced to return to the shore. The fishing season ends on June 15 but now they have to wait for further advisories before venturing out into the sea.

When The Indian Express met Davne, fishermen were anchoring their boats on the Nargol beach and covering them with plastic sheets. The sky was overcast and it had started drizzling.

â€œThis is end of season and we have been out on the sea for the past two days, hoping to get a good catch. We were around 13 nautical miles when we got information from other fishermen that a cyclone had developed and it might pass through south Gujarat. The Coast Guard officials in their boats also told us the same and we returned back. Had we waited for one more day, we might have got a good catch. Now we have to wait till we get further instructions from the authorities,â€ says Davne, president of Nargol Fishermen Association, who was accompanied by his two sons.

The Gujarat government has evacuated close to 79,000 persons living in coastal districts of Bharuch, Surat, Navsari and Valsad on Tuesday, with 6,000 of them from Valsad alone.

The famous black sand beach, Tithal, was closed for visitors and police were deployed.

The high tide at Tithal were the only remaining signs of the cyclone, as moderate rainfall with high speed winds brought immense relief from the scorching heat.

On Tuesday morning, two NDRF teams arrived in the district and took stock of the situation in the coastal villages and Tithal beach as people chose to stay indoors in Valsad town. Shops were open with no customers.

In Valsad, 35 villages â€” 18 in Valsad taluka, 13 in Umargam taluka and 4 in Pardi taluka â€” were put on alert in view of the cyclone. â€œWe shifted around 6,000 people from coastal villages to 35 shelter homes in nearby places, maximum number being in Umargam taluka where families staying in 145 kutcha houses were shifted. We are also mantaining Covid-19 protocol in the shelter homes where food and other facilities are provided. Arrangements have been made in hospitals to deal with emergencies. We are well prepared,â€ said Valsad District Collector RR Rawal, who took charge of the district on Monday.

Hundreds of fishermen returned to Nargol village in Umargam taluka from the sea by Monday evening following the cyclone alert. The village is dominated by Mangela fishermen community though most of the residents of around 10,000 people, work in different factories in nearby Sarigam GIDC and Umargam GIDC. Many fishermen work as assistants in larger vessels in Diu, Okha and Porbander.

â€œDuring the past two months, due to lockdown, our business went down by 60 per cent. My sons and I were going round villages to sell our catch of shrimps, pomphret, lobsters, crabs, etc. We faced huge loss and are just surviving. I am planning to send my sons for some other work once the lockdown lifts. I will try to get them job in some industries in Vapi or Sarigam,â€ says Davne.