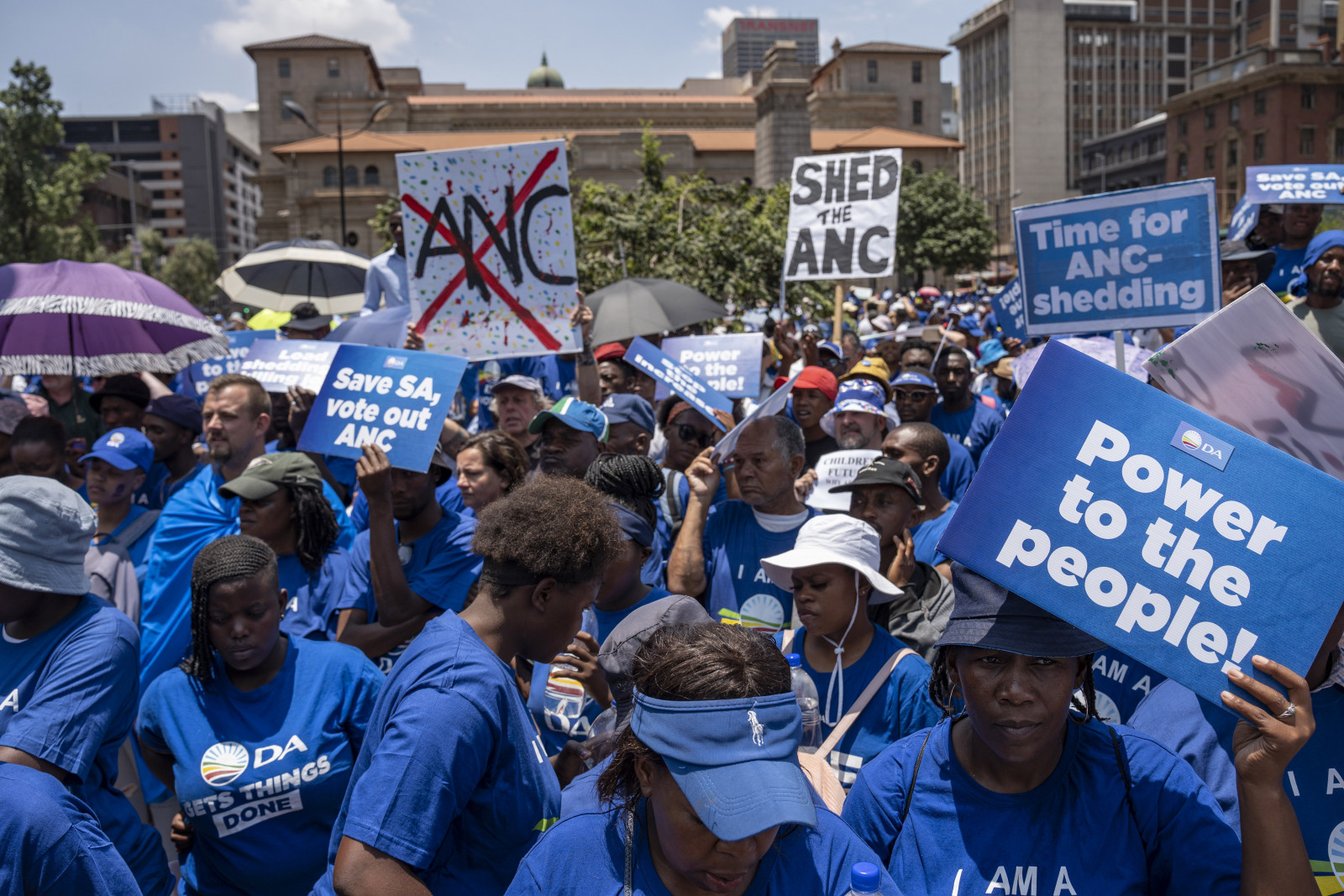 “What the DA is doing here, is disrespecting the ANC in its own home,” said ANC Youth League member Tlangi Mogale on the Democratic Alliance march to Luthuli House, the ANC’s headquarters in Johannesburg.

The Democratic Alliance marched on Wednesday to protest against prolonged load-shedding and cadre deployment to the cabinet.

Mogale said no political party should march to another party’s headquarters, especially when the country was gearing up for general elections next year.

“They must present their solutions to Megawatt Park [Eskom’s headquarters], not here. We do not know who they want to deliver the memorandum to because there’s no official of Eskom in Luthuli House.”

The DA has said the blackouts were “an ANC-engineered electricity crisis”, which was why they marched to the governing party’s headquarters instead of to the government’s Union Buildings in Pretoria.

DA leader John Steenhuisen said when one had a problem, one went to the root cause of the problem to address it.

“South Africans are unable to cook, study or get hot water to wash. Unemployment is the highest in the world. It has been 15 years of load-shedding. The ANC knew about the problem in 1998. They were warned that if they didn’t build new power stations, we would be in trouble by 2007.”

He added that 15 years later, Medupi and Kusile power stations had not been completed because of poor leadership and corruption within the ranks of the ANC.

The march comes as the two parties are in a legal battle in the Gauteng high court, where the DA is challenging the ANC’s cadre deployment policy, saying it is part of the reason state-owned entities have found themselves in a tough financial situation.

The march also coincides with Johannesburg mayor Mpho Phalatse facing three motions of no confidence, which was expected to take place on 26 January.

She has slim chances of survival after a fallout between the DA and Patriotic Alliance (PA) last year.

ActionSA chairperson Michael Beaumont said the DA had collapsed negotiations to restore the majority of the governing multi-party coalition in Johannesburg.

He said the deal would have restored the majority of the coalition in Johannesburg that would have kept the ANC out and, probably, the Economic Freedom Fighters out in Ekurhuleni.

Steenhuisen lamented how some ANC members have power while the rest of the country suffers. “The president and ministers do not worry about load-shedding because Public Works Minister Patricia de Lille has provided the ministers with generators at their homes, which are paid for with the taxpayer’s money.”

“It’s been 15 years of load-shedding, but the ANC knew about the programme long before then. In 1998, they were warned that if they didn’t build new power stations before 2007, SA would run out of electricity and that’s exactly what happened,” Mileham said.

ANC spokesperson Pule Mabe said the ANC Youth League members outside Luthuli House were a welcoming committee for the DA marchers. He added that the opposition party was being provocative and “the ANC will receive no memorandum from it”.

DA Gauteng leader Solly Msimanga said: “South Africa has a cancer called the ANC and we won’t get it right until we remove this cancer from our system.”

Gwarube said the country was in a state of crisis “and we can’t afford not to express our anger against this ANC-manufactured crisis” and this was what had sparked the DA’s decision to conduct a “peaceful” march to Luthuli House.

“We applied for the requisite permission to march and it was granted to us; there is no harm posed to the ANC property,” she said.

The DA marchere were barred from entering the ANC headquarters.