Dar will return to Pakistan within days, announces PML-N 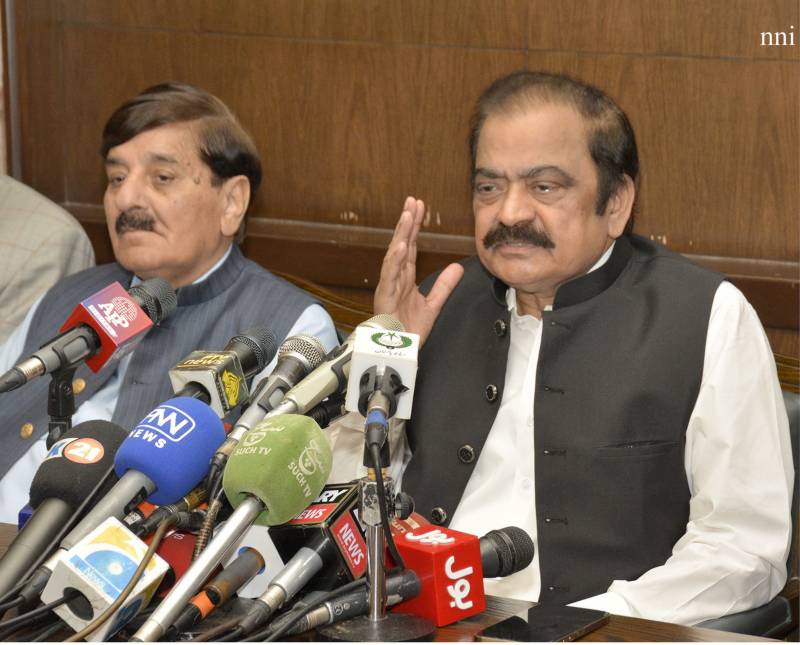 LAHORE/ISLAMABAD    –   Federal Interior Minister Rana Sana Ullah said Saturday that the government will not allow anyone to take the law into his own hands.

Addressing a news conference here, he said the courts have already determined the specific places for protest and government will fully facilitate Pakistan Tehreek-e-Insaf if their leadership decides to hold peaceful protest at the prescribed places.

The minister said Pakistan Muslim League-Nawaz (PML-N) leader Ishaq Dar will come to Pakistan within a week and he will play a constructive role in the economic team of the government. Rana Sanaullah said the PML-N was evolving its party organisational programme which would be completed by December. He added that Nawaz Sharif would come back to the country before the start of next general election’s campaign.

Rana Sanaullah also said that there would be no public meeting during party organisational visits, adding that during these visits meetings would be held with district, provincial constituency and party UC members.

The interior minister said that people could easily evaluate that who performed and which political party had just made hollow slogans while being in the power.

He claimed the PML-N was taking effective measures for welfare of the people and put the country on the path to development. The minister said that recent flash floods had played havoc and increased problems in the country.

Talking to the media at 180-H Model Town, he said that Prime Minister Shehbaz Sharif had highlighted the natural calamity very effectively at global level. He said that Pakistan was not responsible for the devastation caused by the recent floods. He hoped that the international community would play its role towards climate change. The interior minister said when the PTI was in power then inflation was increasing while, on the other hand, the PML-N government was determined to control price hike and was taking measures to provide relief to people.

He said that agreement with the IMF was delayed just because of poor policies of Imran Khan.

Rana Sanaullah said the PML-N had given priority to the country’s interest over its political interest and took some difficult decisions.

He said those who were claiming to be popular their misdeeds were in front of people. Rana criticised the role of Shaukat Tarin who wanted to create hurdles in finalising an agreement with the IMF. He said:” The PML-N is well aware of tactics which the PTI uses for holding its public meetings.” Imran Khan just wanted to come to power for which he was creating hurdles in the development process of the country, the minister added.

He said the PTI would not be allowed to spread chaos and disorder in the guise of protest and added that law enforcement agencies would take due course of action if limits would be crossed. To a question, he said it was not a big deal to bring about a change in Punjab.

PML-N leader Ishaq Dar will assume charge as the finance minister on Tuesday, a private news channel reported Saturday. The report also claimed that the decision to this effect was taken during Prime Minister Shehbaz Sharif’s meeting with party supremo Nawaz Sharif in London on Saturday. Earlier, Dar himself had stated that he would take oath as a Senator immediately after his return. The former finance minister said that he would perform whatever duty is assigned to him by Nawaz and PM Shehbaz.

The order said that the National Accountability Bureau (NAB) had not raised any objection on the petition filed by former finance minister.

According to the application, Ishaq Dar could not appear before court due to illness and suspension of his passport. It further said that the purpose of the issuance of the arrest warrants was to ensure the attendance of accused during trial. It was necessary to give him one opportunity to appear if he wanted to surrender, court added.

The court said that it was giving chance to Ishaq Dar for surrender before it till October 7, after returning the home country. The arrest warrants against him would remain suspended till that time.

The court stopped the authorities from arresting Ishaq Dar and instructed him to surrender voluntarily.

AC-Judge Muhammad Bashir issued the written order in the case. It may be mentioned here that the court had issued his permanent arrest warrants in May this year on his continuous disappearance in reference pertaining holding assets beyond sources of income.