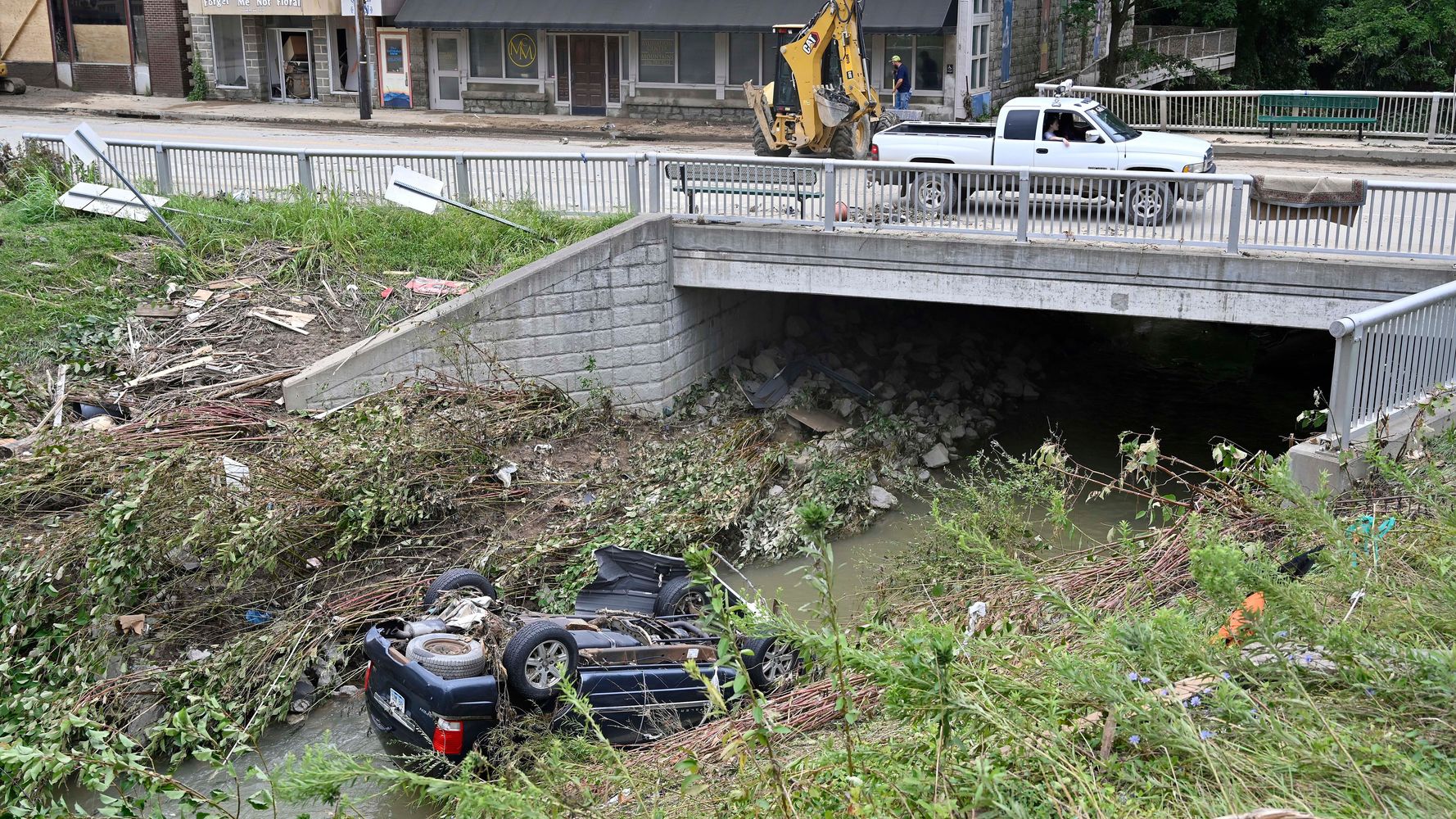 HINDMAN, Ky. (AP) — The number of deaths from massive flooding in Kentucky climbed to 26 on Sunday and several dozen people remained missing amid the threat of more heavy rain.

Kentucky Gov. Andy Beshear said that the death toll had risen by one since Saturday from last week’s storms.

Beshear has said the number would likely rise significantly and it could take weeks to find all the victims. As many as 37 people were unaccounted for, according to a daily briefing from the Federal Emergency Management Agency.

On top of that, more flash flooding was possible in portions of Appalachia on Sunday and Monday as the latest storms roll through, the National Weather Service said. Rainfall rates of 1 to 2 inches per hour were possible in some of the same areas that were inundated last week.

A dozen shelters were open for flood victims in Kentucky with 388 occupants on Sunday, according to FEMA.

At a news conference in Knott County, Beshear praised the fast arrival of FEMA trailers but noted numerous challenges in the recovery, including the threat of more rain and flooding and damage to critical infrastructure.

Beshear said it will remain difficult, even a week from now, to “have a solid number on those accounted for. It’s communications issues — it’s also not necessarily, in some of these areas, having a firm number of how many people were living there in the first place.”

Among the stories of survival that continue to emerge, a 17-year-old girl whose home in Whitesburg was flooded Thursday put her dog in a plastic container and swam 70 yards to safety on a neighbor’s roof. Chloe Adams waited hours until daylight before a relative in a kayak arrived and moved them to safety, first taking her dog, Sandy, and then the teenager.

“My daughter is safe and whole tonight,” her father, Terry Adams, said in a Facebook post. “We lost everything today … everything except what matters most.”

On an overcast morning in downtown Hindman, about 200 miles (322 kilometers) southeast of Louisville, a crew cleared debris piled along storefronts. Nearby, a vehicle was perched upside down in Troublesome Creek, now back within its debris-littered banks.

“We’re going to be here unless there’s a deluge,” said Tom Jackson, who is among the workers.

Jackson was with a crew from Corbin, Kentucky, where he’s the city’s recycling director, about a two-hour drive from Hindman.

His crew worked all day Saturday, and the mud and debris were so thick that they managed to clear one-eighth of a mile of roadway. The water had rushed off the hillsides had so much force that it bent road signs.

Attendance was down for the Sunday morning service at Hindman’s First Baptist Church. Parishioners who rarely miss a service were instead back home tending to cleanup duties caused by floodwaters and mud.

“We’ve already had all kinds of people let us know they just can’t even be here today because of their situation,” Pastor Mike Caudill said.

His church has pitched in to help the reeling community, serving meals and setting up tents for people to pick up cleaning and personal hygiene supplies.

The ordeal is especially difficult for those who have not heard from loved ones since flash flooding inundated the region.

“We have people that are hoping and praying that the reason why their loved one has not contacted them is because they don’t have cell service,” Caudill said.

Asked what he tells people struggling with why their homes and community were ravaged by floodwaters, he said: “I say that we know we live in a turbulent world. There’s storms somewhere every day. There’s upheaval all the time. But that’s no excuse for us not to show up and be there to make a difference.”

In Knott County, where it was raining intermittently Sunday, totes filled with clothes and photos were stacked on retired teacher Teresa Perry Reynolds’ front porch, along with furniture too badly damaged to salvage.

“There are memories there,” she said of the family photos she and her husband were able to find. As she chatted along the side of the road by her water-soaked home, someone stopped and asked if she was OK. She replied by repeating her faith in God.

She and her husband, a retired school administrator, would have taken refuge in their 44-foot travel trailer, but it was swamped by the floodwater. They found her husband’s wallet after searching a day and a half. It was left behind as they escaped the fast-rising water Thursday and went to a neighbor’s house.

“All I know is I’m homeless and I’ve got people taking care of me,” she said.

The rain let up early Friday after parts of eastern Kentucky received between 8 and 10 1/2 inches (20-27 centimeters) over 48 hours. About 13,000 utility customers in Kentucky remained without power Sunday, poweroutage.us reported.