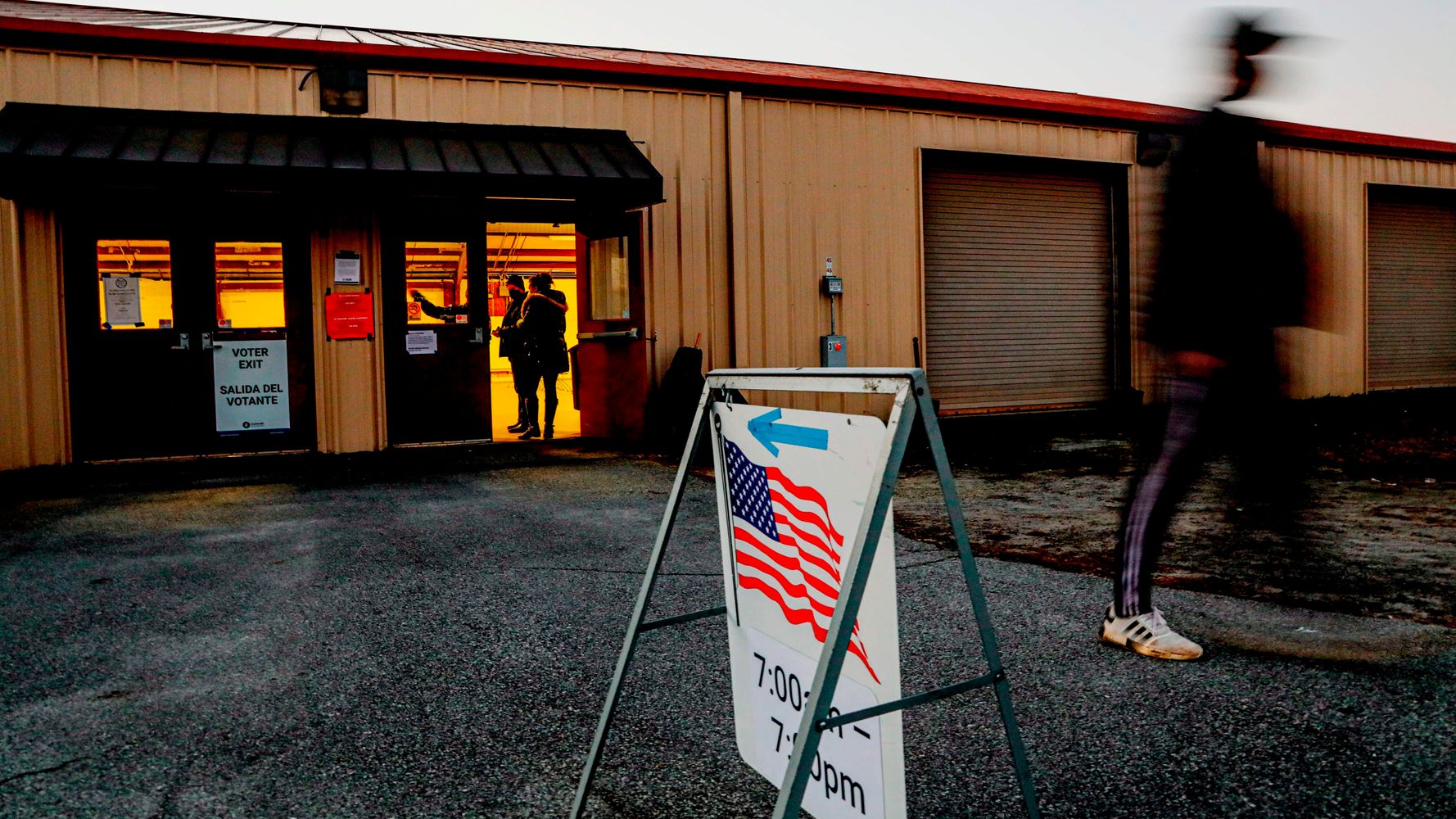 ATLANTA (AP) â€” Georgia voters are set to decide the balance of power in Congress in a pair of high-stakes Senate runoff elections that will help determine President-elect Joe Bidenâ€™s capacity to enact what may be the most progressive governing agenda in generations.

Republicans are unified against Bidenâ€™s plans for health care, environmental protection and civil rights, but some fear that outgoing President Donald Trumpâ€™s brazen attempts to undermine the integrity of the nationâ€™s voting systems may discourage voters in Georgia.

At a rally in northwest Georgia on the eve of Tuesdayâ€™s runoffs, Trump repeatedly declared that the November elections were plagued by fraud that Republican officials, including his former attorney general and Georgiaâ€™s elections chief, say did not occur.

The president called Georgiaâ€™s Republican secretary of state â€œcrazyâ€ and vowed to help defeat him in two years. At the same time, Trump encouraged his supporters to show up in force for Georgiaâ€™s Tuesday contests.

â€œYouâ€™ve got to swarm it tomorrow,â€ Trump told thousands of cheering supporters, downplaying the threat of fraud.

Democrats must win both of the stateâ€™s Senate elections to gain the Senate majority. In that scenario, the Senate would be equally divided 50-50 with Vice President-elect Kamala Harris serving as the tie-breaker for Democrats.

Even a closely divided Democratic Senate likely wonâ€™t guarantee Biden everything he wants, given Senate rules that require 60 votes to move most major legislation. But if Democrats lose even one of Tuesdayâ€™s contests, Biden would have little shot for swift up-or-down votes on his most ambitious plans to expand government-backed health care coverage, strengthen the middle class, address racial inequality and combat climate change. A Republican-controlled Senate also would create a rougher path for Bidenâ€™s Cabinet picks and judicial nominees.

â€œGeorgia, the whole nation is looking to you. The power is literally in your hands,â€ Biden charged at his own rally in Atlanta earlier Monday. â€œOne state can chart the course, not just for the next four years, but for the next generation.â€

Georgiaâ€™s January elections, necessary because no Senate candidates received a majority of the general-election votes, have been unique for many reasons, not least because the contenders essentially ran as teams, even campaigning together sometimes.

One contest features Democrat Raphael Warnock, who serves as the senior pastor of the Atlanta church where slain civil rights leader Martin Luther King Jr. grew up and preached. The 51-year-old Black man was raised in public housing and spent most of his adult life preaching in Baptist churches.

Warnock is facing Republican Sen. Kelly Loeffler, a 50-year-old former businesswoman who was appointed to the Senate less than a year ago by the stateâ€™s Republican governor. She is only the second woman to represent Georgia in the Senate, although race has emerged as a campaign focus far more than gender. Loeffler and her allies have seized on some snippets of Warnockâ€™s sermons at the historic Black church to cast him as extreme. Dozens of religious and civil rights leaders have pushed back.

The other election pits 71-year-old former business executive David Perdue, who held the Senate seat until his term officially expired on Sunday, against Democrat Jon Ossoff, a former congressional aide and journalist. At just 33 years old, Ossoff would be the Senateâ€™s youngest member if elected. The fresh-faced Democrat first rose to national prominence in 2017 when he launched an unsuccessful House special election bid.

Despite fears among some Republicans that Trumpâ€™s baseless claims of voter fraud could depress turnout, the two GOP candidates have pledged fealty to the president. Perdue on Tuesday said that Trump would â€œof courseâ€ deserve the credit if the Republicans won.

â€œWhat the president said last night is, even if you are upset about all of that, youâ€™ve got to stand up with us and fight,â€ Perdue told â€œFox & Friends.â€ â€œWeâ€™ll look back on this day if we donâ€™t vote and really rue the day that we turned the keys to the kingdom over to the Democrats.â€

Democrats have hammered Perdue and Loeffler, each among the Senateâ€™s wealthiest members, for conspicuously timed personal stock trades after members of Congress received information about the public health and economic threats of COVID-19 as Trump and Republicans downplayed the pandemic. None of the trades has been found to violate the law or Senate ethics, but Warnock and Ossoff have used the moves to cast the Republicans as self-interested and out of touch.

Perdue and Loeffler have answered by lambasting the Democratic slate as certain to to usher in a leftward lunge in national policy. Neither Warnock nor Ossoff is a socialist, as Republicans allege. They do, however, support Bidenâ€™s agenda.

This weekâ€™s elections mark the formal finale to the turbulent 2020 election season more than two months after the rest of the nation finished voting. The stakes have drawn nearly $500 million in campaign spending to a once solidly Republican state that now finds itself as the nationâ€™s premier battleground.

â€œItâ€™s really about whether an agenda that moves the nation forward can be forged without significant compromise,â€ said Martin Luther King III, the son of the civil rights icon and a Georgia native, who predicted â€œrazor thinâ€ margins on Tuesday. â€œThere are a lot of things that are in the balance.â€

The results also will help demonstrate whether the sweeping political coalition that fueled Bidenâ€™s victory was an anti-Trump anomaly or part of a new landscape.

Biden won Georgiaâ€™s 16 electoral votes by about 12,000 votes out of 5 million cast in November.

Democratic success will likely depend on driving a huge turnout of African Americans, young voters, college-educated voters and women, all groups that helped Biden become the first Democratic presidential candidate since 1992 to win Georgia. Republicans, meanwhile, have been focused on energizing their own base of white men and voters beyond the core of metro Atlanta.

The runoff elections come as Trump continues his unprecedented campaign to undermine election results across various states he lost. In a recording of a private phone call made public on Sunday, the president told Georgiaâ€™s secretary of state to â€œfindâ€ enough votes to give him an outright victory in the state, even after repeated recounts, failed court challenges, and state certification.

Campaigning in Georgia on Monday hours before Trumpâ€™s visit, Vice President Mike Pence said he has concerns about â€œvoting irregularities.â€ He has also repeatedly described Georgia Republicans as â€œthe last line of defenseâ€ against a Democratic takeover in Washington, an implicit acknowledgement that the Trump has indeed lost the election.

Congress is scheduled to vote to certify Bidenâ€™s victory on Wednesday. In another affirmation of Trumpâ€™s hold on his fellow Republicans, Loeffler took the stage at Trumpâ€™s rally and vowed to join the small but growing number of Republicans protesting the count on the Senate floor.

â€œLook, this president fought for us,â€ she said. â€œWeâ€™re fighting for him.â€