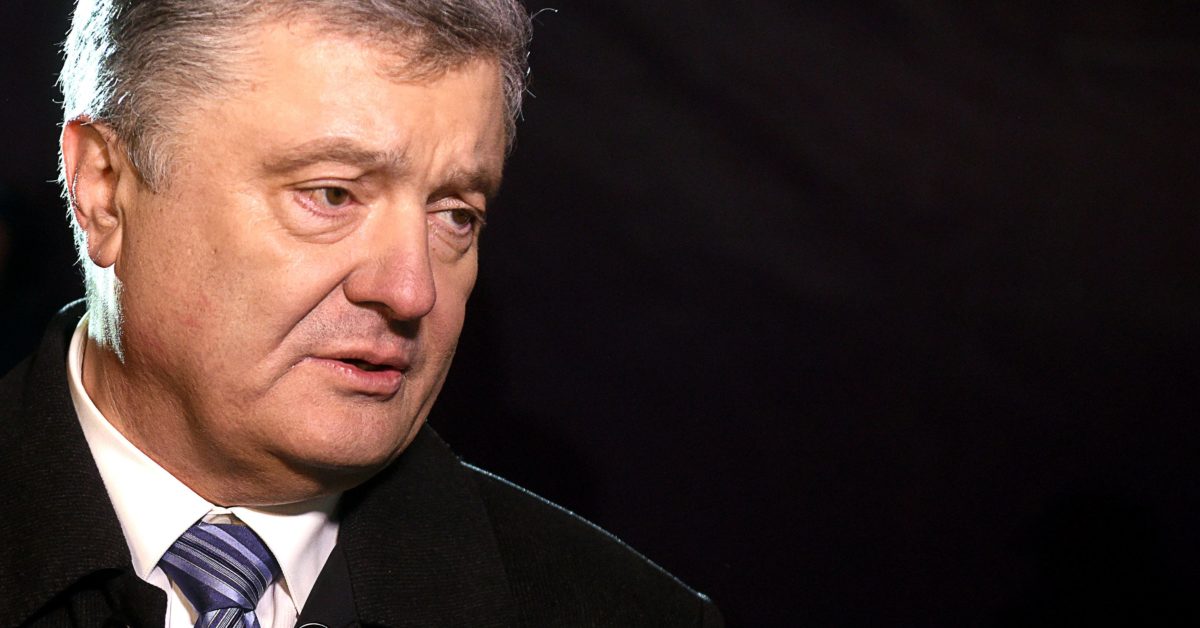 Petro Poroshenko, the former president of Ukraine charged with high treason, isnâ€™t backing down â€”Â and he sure isnâ€™t apologizing.

On the contrary, in a free-wheeling interview with POLITICO on Thursday, the ex-president said he is ready to fight.

First on his list is Russian President Vladimir Putin, who, in Poroshenkoâ€™s words, is the â€œenemy of Ukraine â€¦ enemy of Europe, enemy of the whole free world.â€

Next are the treason charges, which he insists were brought as part of a political vendetta against him by his successor, and rival, President Volodymyr Zelenskiy. â€œBullshit,â€ Poroshenko said of the accusations. â€œJudicial trash.â€

And finally, there are the critics who accuse him of putting his own interests ahead of his countryâ€™s by barreling into Brussels this week and drawing attention to Ukraineâ€™s internal political divisions, just as NATO allies were linking arms to confront Russia over its giant military buildup on the Ukrainian border.

â€œTiming is excellent â€”Â timing for the visit, for the call to unity,â€ Poroshenko said, speaking in English at a hotel near the headquarters of the European Peopleâ€™s Party, his center-right political family.

Dismissing his detractors, Poroshenko, who is now a member of parliament in Ukraine and leader of the opposition European Solidarity party, said he was conducting â€œquiet diplomacyâ€ â€”Â meeting with members of the European Parliament and other contacts to offer advice on how best to deal with Russia.

In the interview, Poroshenko insisted it was Zelenskiy who was undermining Ukrainian unity by allowing a political prosecution that has echoes of the jailing of former Prime Minister Yulia Tymoshenko by her nemesis, former President Viktor Yanukovych, or the more recent jailing of ex-President Mikheil Saakashvili of Georgia.

Adding to the current controversy, the charges against Poroshenko were not signed by the countryâ€™s prosecutor general, Irina Venediktova, who apparently took a single day of vacation in December to avoid being responsible for the case. The charges â€” Poroshenko is accused of being involved in the sale of large amounts of coal that helped finance Russian-backed separatists in Donbass â€” were approved by a deputy prosecutor, Oleksiy Symonenko.

Supporters of Poroshenko have pointed to comments on Tuesday by Victoria Nuland, the U.S. under-secretary of state for political affairs, as evidence that Washington views the criminal prosecution as the problem.

â€œWhat I would like to say to the Ukrainian people and to Ukrainian leadership is that national unity is absolutely essential at this moment,â€ Nuland said at a State Department briefing.

A senior European Commission official expressed exasperation at both the current and former presidents. The official said Zelenskiyâ€™s government was primarily at fault, but also called Poroshenkoâ€™s visit to Brussels this week â€œa desperate act by a desperate man.â€

In the interview, however, Poroshenko said nothing could be further from reality. He noted that he has already pledged to return to Kyiv next Monday, where he potentially faces imminent arrest, and has even publicized his travel plans, on a commercial jet, so that journalists can accompany him.

Poroshenko, a billionaire who made his fortune from the Roshen confectionery business, used the hour-long interview to lay out a fierce defense of his record as president, from 2014 to 2019.

Poroshenko also made the case that the current charges against him were an effort by Zelenskiy to block his participation in future elections, but also revenge by the oligarch Ihor Kolomoisky, a patron and supporter of Zelenskiy.

Andrius Kubilius, a Lithuanian member of the European Parliament, who met with Poroshenko on Wednesday, said he hoped Ukraine would put aside its internal fights to focus on the threat from Russia.

â€œInternal in-fights are very dangerous for the country,â€ Kubilius said.

While conceding that he did not know details of the case, Kubilius added, â€œThis is not the first time when in Eastern Partnership countries, politicized justice is used by ruling authorities against leaders of opposition or former presidents and prime ministers. Usually, when those countries start such kind of internal infighting, they forget about external threats and about their ambitions and reforms for Euro-Atlantic integration.â€

Poroshenko, in the interview, unleashed a fierce barrage of criticism against Zelenskiy, saying he had mismanaged the country and made virtually everything worse.

A spokesman for Zelenskiy did not return a message seeking comment.

But even as he attacked his political rival, Poroshenko insisted that he would stand shoulder to shoulder with Zelenskiy against Russia.

â€œHeâ€™s just my opponent,â€ Poroshenko said. â€œBut Putin is my enemy â€”Â an enemy of my country, enemy of Ukraine, and I am understanding that Putin now is the enemy of Europe, enemy of the whole free world.â€

Poroshenko insisted he made the right decision in signing the Minsk 2 peace accords, which some analysts say saddled Ukraine with infeasible obligations. Poroshenko said a close reading of the agreement would show that it was Russia who signed on to clear obligations to remove its troops and weapons from eastern Ukraine and to allow Kyiv to restore its control over the regions before holding local elections.

As for the criminal case, Poroshenko said he would return to the Ukrainian capital on Monday and would beat the charges.

â€œI do not accept any form of the politically motivated prosecution,â€ he said. â€œI will fight and I will win because truth is with me. If I was afraid in the year 2014, I would never have stopped Putin. If I was afraid in Â 2014, I cannot release two-thirds of the occupied Donbass. If I was afraid in year 2015 of these oligarchs, I could not stop them. And, definitely, Iâ€™m not afraid of Zelenskiy.â€