DÃ©jÃ  vu as the EU struggles with backlogs at borders 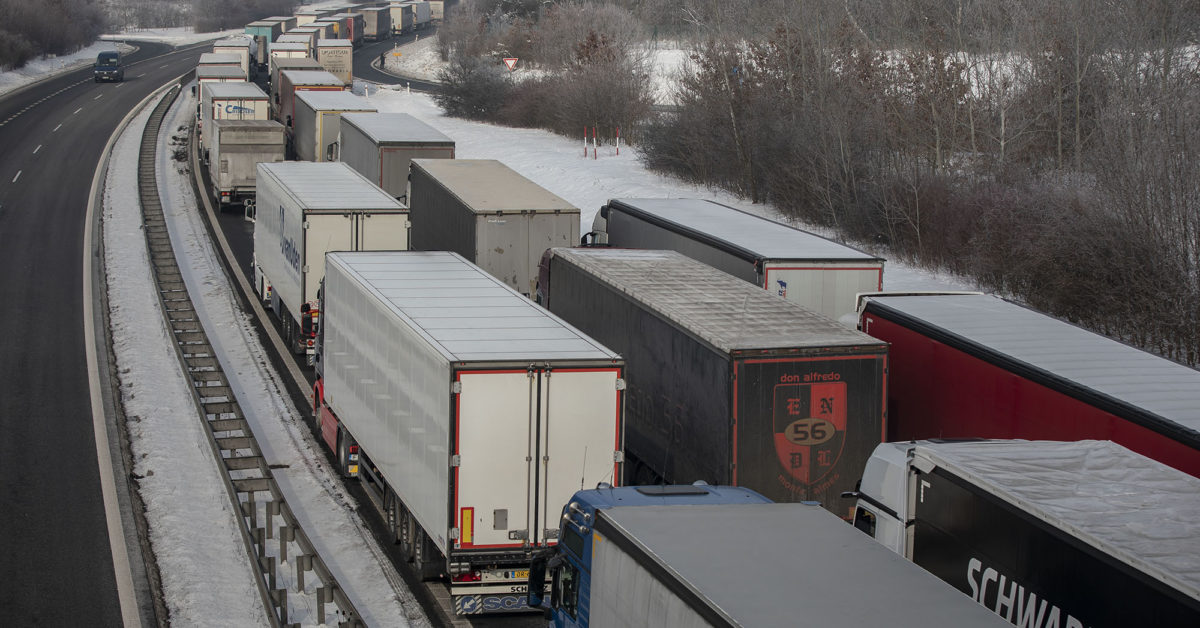 How did we end up here again?

Thatâ€™s the question being asked by industry and policymakers ahead of Thursday’s EU leadersâ€™ videoconference, as new frontier restrictions imposed by a handful of countries throw cross-border trucking into chaos.

A year after Europe’s first confirmed coronavirus cases led countries to shut their borders, truck drivers are again bearing the brunt of travel restrictions, this time to stop imports of fresh virus mutations. That’s despite months of promises from Brussels to protect free movement.

â€œItâ€™s a nightmare,â€ Costache said of the border holdups, as he prepared to ship freight to Germany from Bologna, Italy.

Earlier this month, Germany labeled the Czech Republic, Slovakia and Austriaâ€™s Tyrol region as high-risk â€œvirus mutation areas.â€ It said truck drivers entering from those areas must carry proof of a recent negative coronavirus test. Czech and Tyrollean authorities promptly introduced similar restrictions on their side of the borders.

Germany is one of seven countries, including the Netherlands and France, which now require testing of transport workers, although there are “considerable divergences between the different regimes,â€ Matthew Baldwin, deputy director general of the Commissionâ€™s mobility department, told MEPs Wednesday.

Although many of those controls havenâ€™t caused major disruption, Germany’s hurdles â€œright at the heart of the European Unionâ€ are putting a strain on the promise of â€œgreen lanesâ€ to keep border waits below 15 minutes, Baldwin said. â€œEvery single day of last week we saw long lines of lorries.â€

Data suggest truckers donâ€™t pose a big COVID-19 risk, Baldwin explained, with few showing up positive in testing carried out in Ireland, the U.K. and Italy. Of 17,000 trucker tests conducted by Czech authorities, fewer than 34 came back positive.

â€œThe police donâ€™t ask us: Is everything going ok? Do you want some water? Have you eaten anything,â€ he said. â€œWeâ€™re like sheep, side by side.â€ He feared getting infected as he waited for a test in a throng of drivers.

The blockages are a particular problem for drivers carrying perishable cargoes.

EU leaders are expected to discuss the new travel measures during Thursday’s videoconference. The Commission on Monday sent letters to six countries, including Germany and Belgium, to demand they ease restrictions.

Germany’s measures go against travel guidance that EU countries agreed this month. The guidance says transport staff â€œin principle” shouldnâ€™t be asked to get tested and that restrictive measures should be dropped if they cause disruption.

The German restrictions have also raised heckles in Brussels for directly contradicting the green lanes principle for free movement of freight which the Commission introduced during the first wave of the pandemic.

The green lanes promise was one of the most important things the EU and the Commission did to tackle the immediate impact of the pandemic, Austrian MEP Barbara Thaler said Wednesday. â€œI deeply regret that almost precisely one year later … we’re even backtracking on the green lanes,” she said. “How could this happen?â€

Governments from Rome to Sofia have added their voices to the objections of industry, lawmakers and the Commission.

Despite such concerns, a spokesperson for Germanyâ€™s interior ministry confirmed Tuesday the measures will be extended until at least March 3. The restrictions put a â€œmassive strainâ€ on the internal market, Germanyâ€™s Europe Minister Michael Roth acknowledged, but citizensâ€™ health takes priority.

It was a “difficult decision,â€ particularly after the â€œpainful experience of the reintroduction of border checks in the spring of last year,â€ Roth said. â€œBut without tests, it wonâ€™t work.â€

â€œWe are working on thin iceâ€ when it comes to keeping countries united, an EU official said Wednesday. Leaders are concerned mutated versions will spread fast and may be less responsive to vaccines. â€œAt least we have coordination. Without it, it could be worse than what we see today,â€ the official added.

Baldwin said the Commission is “pulling every soft lever that we haveâ€ to ease restrictions, but with countries retaining control over their national borders, â€œthere isn’t a magical power that the Commission has to change of all of this.â€

Some countries are pushing for workarounds including exemptions for transit traffic and an extension of the validity of tests to 72 hours or longer, rather than Germany’s 48-hour limit. Theyâ€™re also asking for tests to be conducted in, or near, driversâ€™ vehicles to avoid groups gathering outside testing centers, and for multilingual communication to speed up testing processes.

â€œIâ€™m thinking of quitting this trade, because I canâ€™t work like this,â€ he said. â€œThese are not normal conditions.â€

This article is part of POLITICOâ€™s premium policy service: Pro Mobility. From the digitization of the automotive sector to aviation policy, logistics and more, our specialized journalists keep you on top of the topics driving the Mobility policy agenda. Email [emailÂ protected] for a complimentary trial.