Democrats Sprint To Jack Up Youth Turnout In Georgia Runoff 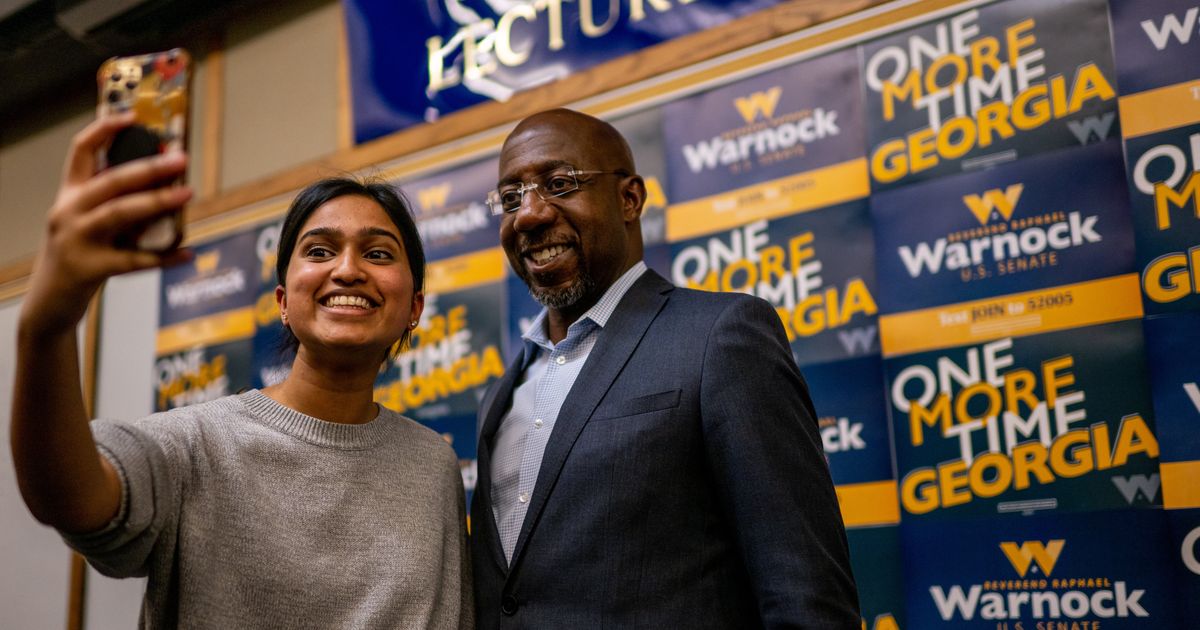 ATLANTA — Sen. Raphael Warnock’s campaign is drastically expanding its organizing efforts on college campuses ahead of the Dec. 6 runoff election in Georgia, as Democrats view increasing youth turnout as critical to gaining a 51st Senate seat.

The moves show Democrats remain worried about dropoff among young voters ahead of the runoff, in which Warnock is battling Republican Herschel Walker, a football legend in the state who won his primary with the backing of former President Donald Trump. Voters under the age of 30 represented about 10.8% of the electorate in the November election, according to the Democratic data firm TargetSmart.

“The data does show that youth voters did not turn out at rates we would like them to,” said Simran Jadavji, a spokeswoman for the New Georgia Project. “It’s an area we can improve on.”

The one public survey of the runoff, from AARP’s Georgia chapter, shows Warnock with a substantial lead among young people, winning voters under the age of 50 by a whopping 24 percentage points. Among voters over 50 — who traditionally dominate midterm and other non-presidential elections — Walker has a 7 percentage point edge.

“We need your energy, we need your enthusiasm, we need your passion and we need your impatience,” Warnock told a crowd of about 200 students who gathered in a lecture hall at Georgia Tech on Friday night. “There are folks counting on you not to vote, not to show up. Young people make the difference.”

Overall, the AARP poll gives Warnock a 51% to 47% edge over Walker, cementing the idea he is a slight favorite in the race after he led Walker in the first round of voting by roughly a percentage point. Republicans are worried about their base’s enthusiasm for the race, since control of the Senate is no longer on the line — Democrats will have at least 50 seats in 2023 regardless — and views of Walker have turned sour following a seemingly never-ending series of scandals and misstatements.

While the Warnock campaign has had a campus organizing program since the summer, the campaign is hiring 100 campus fellows for the runoff across 14 campuses, including massive state universities like the University of Georgia and Kennesaw State University and HBCUs like Morehouse and Savannah State.

The fellows are conducting class drop-ins, where they remind students to vote before a class begins, as well as standard efforts to pass out literature in high-traffic areas of campus. And, borrowing a tactic from the youth vote-focused NextGen America, they’re using a farm animal — “the vote goat” — to draw attention on always-busy college campuses.

“Young voters will play a critical role in this election, which is why the Warnock campaign is ramping up our organizing programs on college campuses — meeting students where they are and ensuring they have all the information they’ll need to vote in the runoff,” said Lauren Chou, a spokeswoman for Warnock’s campaign. “We’re pulling out all the stops to make sure younger Georgians can make their voices heard.”

The Warnock campaign says they’ve also worked with counties to maximize early voting opportunities on campus: Fulton County, for instance, has increased the number of early vote days at Morehouse and Georgia Tech from two to three.

New Georgia Project, meanwhile, has split their organizing team — which is separate from their larger field program — into two parts, one focused on organizing on college campuses and the other focused on young people who aren’t attending college. That team is instead dropping at restaurants, bars and other places where young people might work and gather.