Did tweets by Greta Thunberg and Rihanna help or harm the Indian farmersâ€™ protest movement? | The Express Tribune 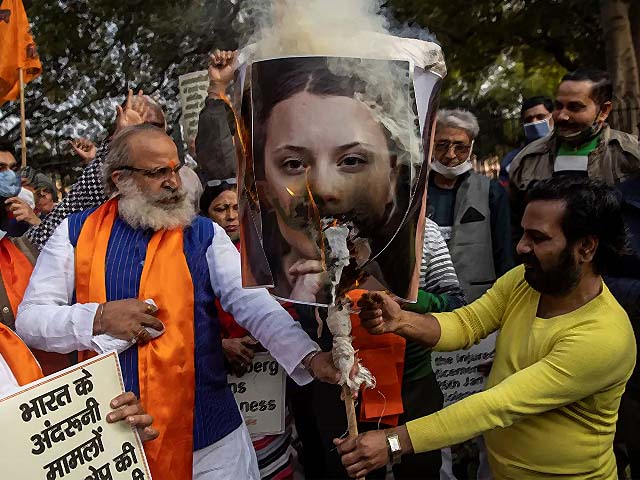 The Indian government, celebrities, and many social media users are furious after environmental champion Greta Thunberg and famous American singer Rihanna tweeted their support for the Indian farmersâ€™ protest movement. Both of them tweeted a story from CNN about how â€œIndia cuts internet around New Delhi as protesting farmers clash with policeâ€, with Thunberg saying that â€œWe stand in solidarity with the #FarmersProtest in Indiaâ€ while Rihanna asked â€œWhy arenâ€™t we talking about this?! #FarmersProtestâ€. Thunberg also tweeted, deleted, then updated a â€œtoolkitâ€ to help that historic grassroots protest movement achieve its aims.

The Indian reaction can essentially be summarised as demanding that those two influential figures mind their own business. Some of the most extreme responses speculated that they were paid to tweet what they did and a few even ridiculously claimed that Pakistanâ€™s ISI was secretly behind all of this. Those were all the wrong positions for them to take because they attacked the messenger without addressing the message that they were popularising, specifically Indiaâ€™s controversial decision to cut internet access to the protesting farmers. Itâ€™s difficult for them to accept, but observers across the world donâ€™t blindly support this drastic course of action. The aggressive response to their tweets was suspiciously defensive and only drew more attention to this issue.

In that sense, it can be said that Thunberg and Rihanna tremendously helped the Indian farmersâ€™ protest movement attract even more global renown as a result of this unintended scandal. This outcome was unwittingly helped by Indiansâ€™ overreaction to it and the lack of substance in their response. If anything, many Indians provoked previously unaware observers to wonder why they reacted the way that they did, especially those who behaved so aggressively and peddled ridiculous conspiracy theories about Pakistan. This raises wider questions about many Indiansâ€™ deep-seated insecurities whenever non-Indians do anything other than lavishly praise everything that their country does. Those who dare to form their own opinions are almost always attacked.

It never used to be like this, at least not less than a decade ago, but Prime Minister Narendra Modiâ€™s rise to power and the subsequent imposition of his ultra-nationalist BJPâ€™s views onto the rest of society has had a chilling effect on the social media sphere. Many dissident Indians feel uncomfortable publicly expressing their peaceful disagreements with state policy despite it being their constitutional right to do so if they choose. Not only that, but the BJPâ€™s troll farms have churned out countless members of what can be described as the â€œModi Mobâ€, which refers to the cyber thugs who have made it their lifeâ€™s mission to intimidate everyone whether Indian or otherwise who doesnâ€™t think that India is â€œperfectâ€ or a â€œsuperpowerâ€.

The vast majority of the internetâ€™s users never had these unfortunate experiences because they generally donâ€™t care about India so theyâ€™ve never faced the wrath of the Modi Mob for sharing any views about it. That suddenly changed after Gretaâ€™s and Rihannaâ€™s followers saw how toxic many Indians can be whenever someone doesnâ€™t conform to their expectations that the rest of the planet must praise India for being a â€œperfect superpowerâ€ no matter what. The resultant international scandal that this caused after the Indian government felt compelled to respond to their tweets brought this dark aspect of Indian online life to the forefront of global attention.

To be clear, India is about much more than just the Modi Mob, but regrettably those troll armies dominate its cyberspace and disproportionately influence how people view the country. In an instant, decades of hard-earned goodwill towards Indian society disappeared after the Modi Mob was let loose against Thunberg, Rihanna, and their supporters. Itâ€™ll be extremely difficult for India to repair the enormous soft power damage that the BJPâ€™s trolls inflicted on their countryâ€™s national interests. This is even more so the case because they donâ€™t acknowledge such self-inflicted damage but are proud for doing what they believe was their â€œpatriotic dutyâ€. The overarching problem here is that Indian patriotism is equated by many Indians with toxic trolling.

As this scandal drags on and only becomes more toxic by the day as an increasing number of Modi Mob members lose what little self-control they might have initially had after being incessantly encouraged by their fellow trolls, Indian celebrities, and their government alike, the primary point that Thunberg and Rihanna raised continues to be unaddressed. India cannot explain how itâ€™s able to describe itself as the â€œworldâ€™s largest democracyâ€ while shutting off the internet to protesting members of the opposition. The more wildly the Modi Mob continues attacking the messenger, the more the rest of the world realises that Indiaâ€™s soft power is based on a lie.

Itâ€™s one thing for India to shut off the internet to protesting members of the opposition on whatever pretext it claims was necessary (e.g. â€œsecurityâ€), and another entirely to proudly defend this action as being in alignment with the universal democratic principles that it claims to be the worldâ€™s largest representative of. India must either never shut off the protesting oppositionâ€™s internet again and then condemn what it previously did or admit that it truly isnâ€™t the â€œdemocracyâ€ that itâ€™s always claimed to be and thatâ€™s why it shut off the internet. India canâ€™t have it both ways, and the sooner that it explains which of the two it truly is â€“ a national security state or a democracy â€“ then the quicker that this scandal can end, but the reputational damage will still linger.