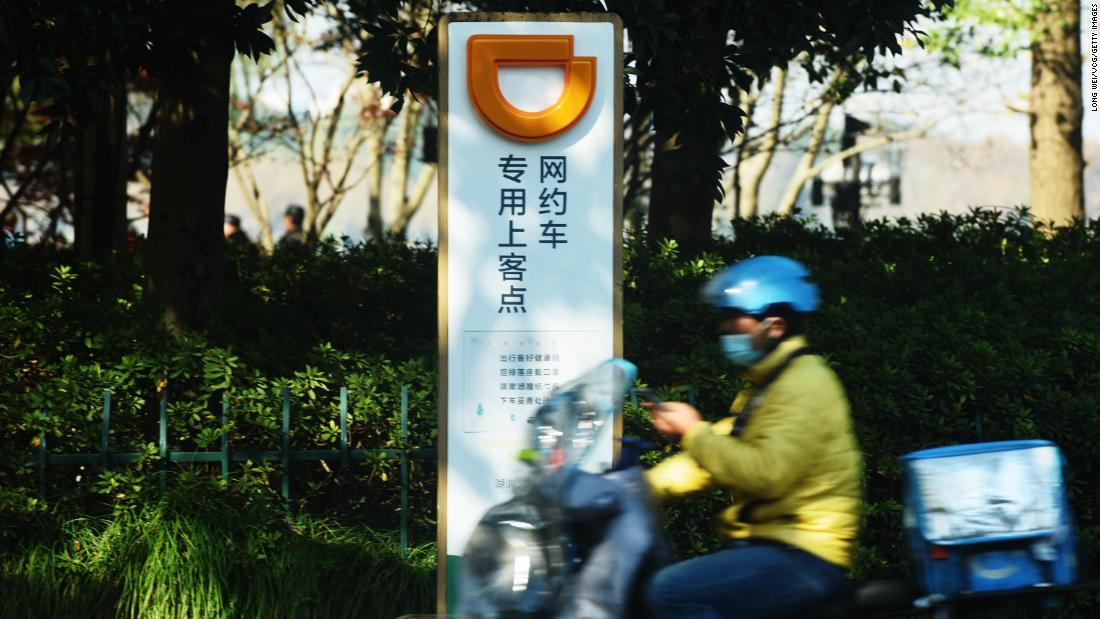 The decision to target Didi was widely seen as punishment for its decision to go public overseas, and the company became a prime example of China’s efforts to curb the power of Big Tech firms.

Didi’s situation is set to spark a broader reassessment of Chinese companies that have listed shares abroad â€” including Alibaba, Pinduoduo, Baidu, JD.com, Nio (NIO) and Tencent Music (TME). Will they suffer the same fate?

“Didi’s repatriation looks likely to be the start of a trend, and the market should expect that others will follow,” Silvers said. “Equity investors may not wait for the other shoe to drop.”

Pinduoduo (PDD) shares are down 4% in premarket trading, while Baidu (BIDU) is off more than 1%. Alibaba (BABA) shares listed in New York, which have already plunged 48% this year, are slightly lower. Didi’s stock, which has fallen 44% below its IPO price, is down 3% premarket.

Investors in such stocks have been on edge for months. The S&P/BNY Mellon China Select ADR Index, which tracks top US-listed Chinese firms, has plunged 40% this year.

Two developments this week further underscore the fact that financial ties between the United States and China are fraying.

On Thursday, the US Securities and Exchange Commission finalized rules that would allow it to delist foreign firms that refuse to open their books to the country’s regulators. China has for years rejected US audits of its firms, citing national security concerns.

And Bloomberg reported that Beijing is set to ban the loophole that allowed companies like Alibaba and Didi to list in New York in the first place.

“Chinese founders previously looked to [New York] for a number of reasons, including looser listing standards, often higher multiples and a domicile beyond Beijing’s financial [and] regulatory grasp,” Silvers said. “That calculus has rapidly changed, and today’s companies â€” especially established market leaders or those in certain tech sectors â€” will likely face increasing pressure to list on China-controlled exchanges.”

November looks to have produced another solid month of job gains as the US economy continued its recovery from the pandemic.

The latest: Economists polled by Refinitiv expect to learn Friday that 550,000 jobs were added last month. That would mark the biggest gain since July.

Such a reading could bolster the Federal Reserve’s resolve to accelerate the pace at which it ends its crisis-era bond buying program. Chair Jerome Powell said earlier this week that the Fed was considering shutting it down faster to rein in inflation.

But strategists will be scrutinizing more than the headline number to assess the state of the job market.

The labor force participation rate, which tracks the number of working age people actively seeking employment, will be carefully monitored as economists track ongoing shortfalls of workers, while data on wage growth could indicate broader pressure on prices.

The arrival of the Omicron variant of the coronavirus will also loom over the report, though its early effects won’t show up in the release.

Mark Zandi, chief economist of Moody’s Analytics, told me that it’s too early to say just how severe the impact will be.

“Future waves of the virus will surely hurt job growth, but there is no way to know how badly as that depends on the size and severity of the wave,” he said. “My sense is that the economic damage caused by each new wave of the virus will be less than the previous wave, as the vaccines and other health care responses become more effective, and economies become more adept at navigating through the waves, but it is of course not hard to construct darker scenarios.”

Amid virus uncertainty, what goes down can go up again

Scientists are racing to determine whether the Omicron variant is more transmissible and if it can evade vaccines. In the meantime, Wall Street doesn’t know what to think.

The latest: The S&P 500 rose on Monday then sold off on Tuesday and Wednesday before jumping again on Thursday.

The churn was particularly apparent in the travel sector. Shares of Delta Air Lines, the largest US carrier, plunged more than 7% on Wednesday before leaping 9% on Thursday. Marriott fell 3% on Wednesday and then rallied 6% during yesterday’s session.

The VIX, which measures S&P 500 volatility, jumped as much as 91% from the beginning of November this week before coming back down slightly, while the CNN Business Fear & Greed Index is in “extreme fear” territory.

What next? Investment advisers say cooler heads should prevail for now, but markets remain vulnerable to any news headlines on the variant’s impact on public health or the economy.

Also today: The ISM Non-Manufacturing Index for November will shine a light on the health of the US services sector. It arrives at 10 a.m. ET.

Coming next week: Will consumer prices in America continue to rise at the fastest rate in three decades?