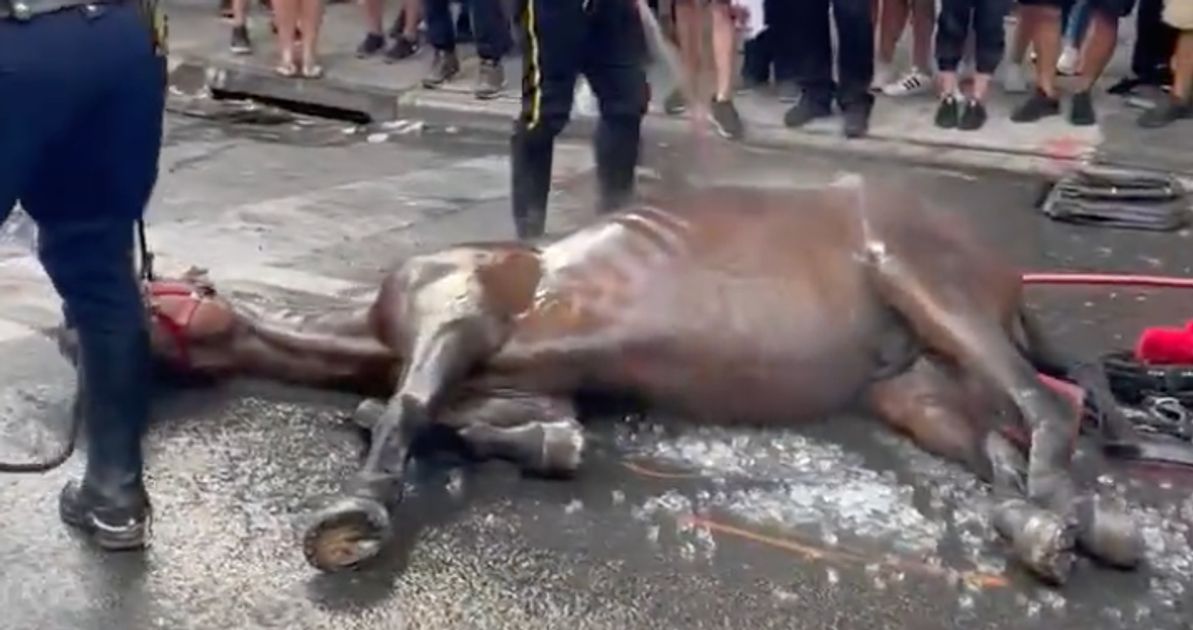 New Yorkers and tourists were horrified by the sight of a collapsed carriage horse lying on the hot asphalt in Manhattan’s Hell’s Kitchen neighborhood on Wednesday.

Videos taken by eyewitnesses and shared on social media showed the 14-year-old carriage horse named Ryder lying motionless on the street as officers sprayed the animal with water.

Witnesses told NBC News that when the horse initially buckled to the ground, the carriage driver was seen whipping it with its reins in an attempt to get it to stand back up.

“He started whipping and saying, ’Get up, get up. Like bro, don’t whip your horse, he obviously needs some water, he looked dehydrated,” a witness named Kelvin Gonzalez told NBC.

The horse eventually laid its head on the asphalt, and the driver was forced to remove it from the carriage.

The New York City Police Department told NBC that they arrived on the scene at 5 p.m.

“Upon arrival, patrol officers observed a carriage horse lying in the middle of the roadway in distress,” police told the outlet in a statement. Mounted officers then began to hose the horse down in an attempt to lower its body temperature.

The horse also received ice from surrounding restaurants and a pillow was placed under its head to keep it comfortable, according to the local Hell’s Kitchen website, W42ST.

“A vet arrived on the scene, and I heard him say, ‘We’ll have to tie his legs and winch him into the trailer,’” Hell’s Kitchen local Paul Devlin told W42ST, adding:

“The horse must have heard this, because he got up after that. They led him into the trailer and took him away.”

In footage posted to Twitter, you can hear the crowd cheer as the horse finally stands up.

Police told NBC that the horse was then taken to a stable where it received medical care, and the horse was conscious Wednesday night.

The incident has reignited calls to ban horse and carriage rides in New York City.

Former Mayor Bill de Blasio vowed that one of his first acts in office would be to ban horse-drawn carriages. He was unsuccessful, but was able to sign the carriage horse relief bill into law, which makes it illegal for the horses to work in temperatures 90 degrees or hotter. Wednesday’s high temperature in New York City was 87 degrees.

“People are sick to their stomachs over this,” she told Gothamist. “And so are we. And what is the City Council waiting for?”

She added that the city is “so behind” other cities around the world “that have already removed horses from the streets and replaced them with electric carriages.”

A spokesperson for the Transport Workers Union, which represents the carriage drivers, told both NBC and Gothamist that the horse was diagnosed with equine protozoal myeloencephalitis — a neurological disease that is caused by a parasite found in opossum droppings. The spokesperson said that the disease is the reason the horse collapsed, not the heat.

Councilman Robert Holden from Queens — who has introduced legislation to replace horse-drawn carriages with electric ones — was skeptical about the union’s claim.

“You can’t get a human diagnosis that quickly,” he told Gothamist.

“When are we going to stop this? We don’t need this in New York City. Period.”