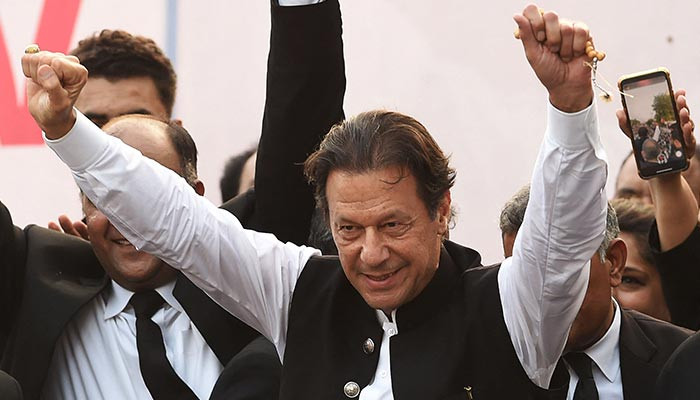 LAHORE: PTI Chairman and former prime minister Imran Khan said Wednesday that the next chief of army staff (COAS) should be appointed on merit.

Speaking with journalists in Lahore, the former premier said that he “doesn’t care who becomes the next army chief”.

“Army chief should be appointed on merit. They [government] want to bring an army chief of their choice. How can a criminal [Prime Minister Shehbaz Sharif] decide about the army chief?” Khan said, referring to the incumbent government.

The former premier said that he considers consulting a “criminal” when deciding on the country’s army chief as a “security threat”.

“They are scared about their own corruption. I don’t have any fear,” Khan said.

Commenting on the issue of the lost cyhper, Khan said: “Cypher has not been stolen. Its master copy remains with the Foreign Office. Thankfully, they have accepted [that there was] a cypher.”

The PTI chief added that if the investigating committee — probing the lost cypher — summons him regarding the cypher, he will first ask whom Assistant Secretary of State for South and Central Asian Affairs Donald Lu ordered to be removed.

When responding to a question regarding the general elections, Khan said that October 16 is not yet close.

“It is possible that by-elections never take place. The Election Commission is biased. They want me to be disqualified,” the former prime minister lamented.

“I have not done anything illegal. Even though they [Zardari and Sharif] couldn’t take expensive cars from the Toshakhana, they took those home anyway,” the PTI chairman said.

The former prime minister also slammed Interior Minister Rana Sanaullah and said how could he stop his party from marching to Islamabad.

“Our government functions on all four corners of Islamabad. We are in Punjab, Khyber Pakhtunkhwa, and Azad Kashmir. He is just threatening us,” Khan said, adding that the government itself is a “security threat”.