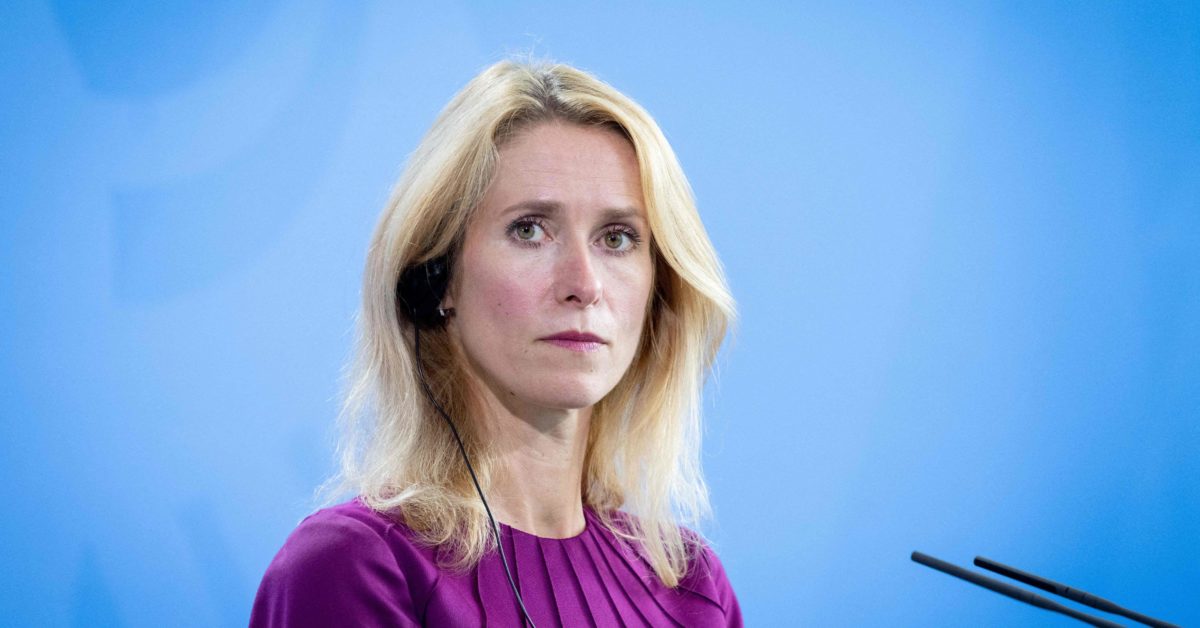 Russian military pressure cannot be allowed to influence who can join the European Union and NATO, warned Kaja Kallas, the prime minister of Estonia, ahead of two key meetings on the blocâ€™s relationship with its neighbors.

By amassing troops at the Ukrainian border, and then suggesting that NATO rescind a 2008 commitment to Ukraine and Georgia that they would one day become members of the alliance, Russian President Vladimir Putin â€œis trying to present himself as a solution to this problem that he has created himself. And I think we shouldnâ€™t fall into that trap,â€ Kallas said in a phone interview on Tuesday in which she also discussed concerns about U.S. President Joe Bidenâ€™s outreach to Putin.

â€œI donâ€™t think that Russia has any right to say anything about who has the right and who doesnâ€™t have the right to join [the] European Union or NATO,â€ said Kallas, whose country of 1.3 million people borders Russia.

Russia will be high on the agenda of two high-level meetings this week. On Wednesday, itâ€™s theÂ sixth Eastern Partnership summit, in which the EU will meet with a number of its neighbors including Ukraine. Also taking part are Armenia, Azerbaijan, Georgia and Moldova (Belarus suspended its participation last June in the wake of sanctions imposed by the bloc following a disputed election).

A day later, EU leaders will meet for a European Council at which relations with Moscow, and the EUâ€™s reaction to the military build-up on the border with Ukraine, will be discussed.

For Kallas, â€œit is very important that, first of all, we give the signal at very high level that any military pressure from outside to make NATO or Ukraine or the EU change its decisions or its process of making decisions is not acceptable.

â€œWhat we also should show [is] â€¦ that Ukraine has friends and allies and we are there with them. So if somebody would think of aggression towards Ukraine, you also understand that there are allies and friends behind Ukraine.â€

Biden spoke to Putin last week, creating some concern in Eastern Europe that the U.S. president is open to listening to Kremlin calls to curb NATO expansion and deploying weapons near Russian territory.

â€œI hope Iâ€™m wrong but I smell â€˜Munichâ€™ here,â€ Marko Mihkelson, head of the foreign affairs committee in Estoniaâ€™s parliament, told the Financial Times, a reference to the 1938 agreement in Europe to try to avoid conflict with Adolf Hitler by ceding the Sudetenland from Czechoslovakia.

In the interview, Kallas distanced herself from the Munich comment but said she didnâ€™t like the Biden outreach to Putin. â€œI personally also donâ€™t like the steps that have been taken towards Putin. But it is not up to me to say, who consults with whom,â€ she said.

Yet at the same time, â€œBiden has said that nothing will be agreed about us without us,â€ Kallas said, and therefore â€œI have no reason to doubt their work.â€

Kallas didnâ€™t rule out that Russia, rather than planning an outright invasion of Ukraine, could instead be trying to destabilize Kyiv or using the threat of military action to blackmail Ukraine or its allies.

â€œThis definitely has an effect on Ukraine,â€ she said, pointing out that â€œwe have many conflicts or smaller conflicts that are â€¦ much harder to fight,â€ such as Moscow-backed Belarus sending migrants to the EU border or the â€œdestabilizationâ€ that Putin is also causing by using rising energy prices â€”Â â€œthis is exactly what we see with the Nord Stream 2 pipeline and the gas transit through Ukraine.â€

The controversial Russia-to-Germany offshore pipeline will be a key test for new German Chancellor Olaf Scholz, who makes his EU summit debut on Thursday. The new German coalition government has been less vociferous in its support of Nord Stream 2 than the previous administration.

â€œIt will be interesting to see how the new German government proceeds with this,â€ Kallas said. â€œI expect that it will come upâ€ at the summit, she said of Nord Stream 2.