‘Don’t Vote’: A Look At Blake Masters’ Emails To His Vegan Co-op At Stanford University 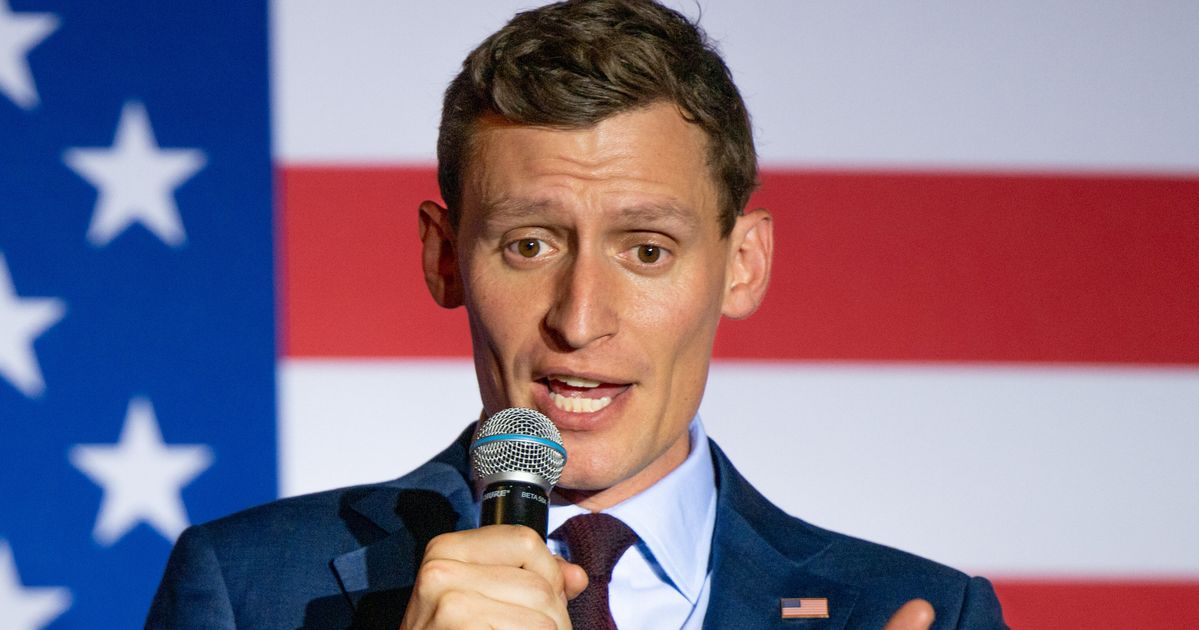 As a college student, Blake Masters ― now the GOP candidate for U.S. Senate in Arizona ― defended a classmate’s skepticism of the “official story” of the Sept. 11 terrorist attacks. He also told his roommates that voting was pointless and often “immoral,” railed against health inspections as “bullshit,” and said America circa 2006 was “fascist.”

The messages were sent to the group email list of Columbae, a left-leaning vegan co-op at Stanford University where Masters lived and where the housemates made decisions on a collective basis. The emails, dozens of which were obtained by HuffPost, show Masters’ embrace of contrarianism and devout libertarian ideals even before he became an acolyte of venture capitalist and democracy skeptic Peter Thiel, whose millions funded Masters’ campaign in the Arizona primary.

Masters is now trailing Sen. Mark Kelly (D-Ariz.) in public polls as Thiel and Senate Minority Leader Mitch McConnell (R-Ky.) argue over who will fund his efforts, since Kelly has a more than 12-to-1 advantage in cash on hand for the final months of the race, according to Federal Election Commission data. A Kelly victory would provide a major boost to Democratic hopes to maintain control of the 50-50 Senate.

Masters’ past comments, on blogs, in interviews and even on a Crossfit message board, have already become major issues in the race. His opponent in the primary, businessman Jim Lamon, spent millions on ads noting that Masters had referred to the Unabomber as an “underrated” thinker, and the Anti-Defamation League has criticized posts and articles Masters wrote suggesting that the “Houses of Morgan and Rothschild” were partially responsible for America’s entry into World War I.

To win his primary, Masters espoused a variety of hard-line views, calling for the overturn of the Supreme Court cases guaranteeing a right to contraception and same-sex marriage, backing former President Donald Trump’s lies about a stolen election in 2020 and saying he would vote to impeach President Joe Biden. He’s backed away from some of those positions since winning the primary, including a call to privatize Social Security.

The views Masters expresses in the 2006 emails hew less to conservative orthodoxy, and show the influence of the “dozens and dozens of books on true freedom, anarchy, and philosophical (not partisian) libertarianism” he boasted of owning. Many of the emails lament what he described as the limited scope of American political debate, and decry American politics and elections as little more than a scam.

They also provide hints of the politician Masters would become: disdainful of democratic outcomes, skeptical of foreign intervention and government programs, and willfully provocative.

Masters’ campaign declined to comment on the emails. During the primary, he dismissed criticism of his past views, while acknowledging they were likely to become news.

“The left-wing media, of course they were going to try to smear me, call me a racist and a sexist and a terrorist,” he said while holding his young son, in a video posted to Twitter. “They’ll pore over whatever I may have written as a teenager, try to twist it all out of proportion.”

“Nothing wrong with being a ‘conspiracy theorist’”

In May 2006, the Department of Defense released footage of American Airlines Flight 77 striking the Pentagon on Sept. 11, 2001 ― prompting another Stanford student to send off a lengthy email questioning the official story of the attacks and recommending the website of Scholars for 9/11 Truth. Masters quickly defended his fellow student’s skepticism, while never outright sharing his views.

“I just want to point out that there is absolutely nothing wrong with being a ‘conspiracy theorist’ or a ‘revisionist historian,’” Masters wrote, adding: “Given how many state-run conspiracies and official revisionist projects have taken place in recent history … it would be crazy to pretend that such things are no longer possible, or that ‘it couldnt happen here…’”

“The story we’ve been told about 9/11 may indeed be correct, but blindly accepting it would be an error (as would accepting ‘conspiracy theories’ without reasonable possibilities/evidence presented),” Masters continued. “When something like 9/11 happens, you’ve gotta ask, ‘who benefits?’ There are a couple of different answers to the question, and we ought to evaluate them all, including our alleged protectors. Especially when the U.S. government has shown in the past that sacrificing citizens for political goals is something that its willing to do.”

In another email, sent in February 2006, Masters sent a link to his blog post about the sinking of the Lusitania, which helped spur America’s entry into World War I.

“[D]o you know why the US entered WWI? it wasnt to ‘make the world safe for democracy,’” Masters wrote. “The US went in to save banking interests and to fulfil [President Woodrow] Wilsons personal fantasy dream of a world government. The Lusitania was sacrificed and used as a propaganda tool. Read on, and get pissed. This shit is going on right now with George W. Bush.”

In January 2006, at a time when George W. Bush was in the White House and Republicans controlled both the House and the Senate, Masters emailed his classmates with a provocative subject line: “Fascism + America = right now.”

In the email, Masters linked to a blog post that is no longer available online.

“The thesis is that the United States government is fascist. I hope that you find the analysis interesting and illuminating,” Masters wrote in the email, which went out at around 10 a.m. on a Saturday. “If only one person reads it, it will have been a well-spent friday night.”

One idea Masters expressed repeatedly in the emails was that voting was a waste of time.

On Election Day 2005, he sent his housemates an email with a series of links to articles that he said “offer an alternative and objectively more peaceful approach to social composition than voting, or even politics.” Most of the articles were from libertarian thinkers, including Murray Rothbard. One, however, was from anarchist Emma Goldman, who Masters hastened to add was “wrong about property rights.”

Another email he sent in the run-up to the 2005 election advised the recipients that “if you must worship that miserably peculiar American diety called Democracy tomorrow,” they should read an article opposing California’s Proposition 80, which dealt with energy regulation. (The proposition failed.)

In June 2006, Masters sent an email with “Don’t Vote” in the subject line, before quoting the satirist H.L. Mencken: “Every election is a sort of advance auction sale of stolen goods.”

And on Election Day 2006, he returned with a similar message, sharing an op-ed he’d submitted to The Stanford Daily. “Economically speaking, you’re wasting your time at the polls,” Masters wrote. “Sure, you can get all patriotic on me and claim some subjective inner fulfillment of your duty as a good citizen and all that mumbo jumbo. Fine. I can’t argue with you there. But your vote is meaningless and it will not affect the outcome. Period.”

He went on to argue that most voters are immoral, since “most people are voting to increase coercion against others” by backing either tax increases or “aggression against innocent people.”

“I encourage you not to vote today, because it’s simply not worth your time,” he wrote. “You’re merely choosing what you see as the most appealing of various forms of coercion that will be applied to you and your friends, and perhaps providing some tacit consent to the special interests the run the show in the process.”

Many of the emails dealt with the day-to-day realities of college life. In them, Masters asks if anyone has “South Park” DVDs he can borrow, and navigates the logistics of moving into the house and splitting up chores. He invites people to Shakespeare readings, and to play intramural soccer.

“[S]o i dont know if you are aware of this, but soccer (hereafter called ‘futbol’) is the greatest sport in the world,” Masters wrote in 2006. “Billions of people play and love futbol. America is pretty much the least appreciative of this great game. In America, we prefer NASCAR. That’s lame. Don’t be lame. Come play IM Futbol!”

“what a bunch of fucking bullshit!”

However, Masters’ libertarian beliefs informed his day-to-day life as well. After a county health inspector warned Columbae about the cleanliness of its kitchen, Masters seethed over what he saw as a violation of his rights.

“[W]hat a bunch of fucking bullshit!” he wrote. “columbae dining is a very healthy and safe place to live, cook, and eat, from everything ive seen. we use good natural food, and our clenliness, aside from the occasional lapse that some unresponsible party ends up taking care of, is pretty darn good. so essentially the government is confiscating our money and using it to pay a beaureucrat to invent some abstract health-code list and another uncivil servant to come enforce the rules and tell us, private individuals living cooperatively, how to live our lives. doesnt something seem wrong?”

Masters wrote that he would follow new rules put in place to keep the kitchen clean, “out of respect for my peers and the house.” But, he wrote, “the feeling of aquiescing to these bastards and following their rules just leaves me with a disgusted feeling.”