Nine’s weather presenter Garry Y﻿oungberry said while rain would fall nationwide in the next seven days, the focus was once again eastern Australia.

It will be followed by a second system on Friday and Saturday.﻿

Queensland is looking at 50mm-100mm of rain for the south-west and southern interior regions, and 25mm-50mm for the south-east corner.

New South Wales will bear the brunt of the wild weather, with a heightened risk of flash flooding and rain throughout the state.

A total of 50mm-100mm has been forecast for NSW, but the north-west, Central West, and the South Coast will be closer to 100mm

“I am afraid we will definitely see some flooding from this, and unfortunately it will be the inland areas for our farmers as well, and in Queensland it will be the south-western corner,” Youngberry said.

“They really don’t need a great deal of rain. Thankfully, though, north-east corner of NSW, the areas that have been flooded recently will see the lightest falls of 25 to 50mm.”

However, the heaviest falls are set for outback NSW, which “really can’t take” the added load.

“There will definitely be flooding over this next week,” Youngberry said. 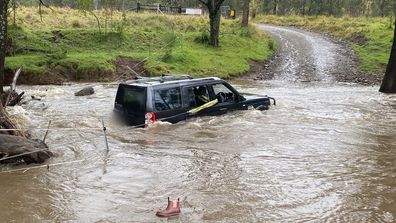