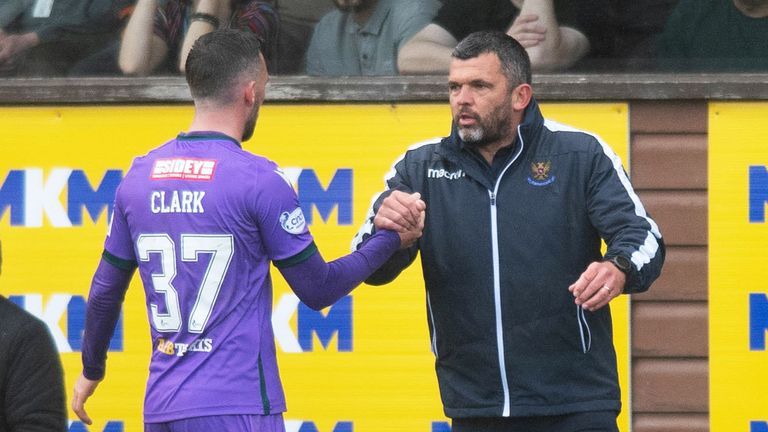 First-half goals from Stevie May and Melker Hallberg put Saints in control but the home side made it a nervy finish late on when substitute Tony Watt pulled one back.

However, Saints saw out the game to take all three points and move up to eighth in the table, while United remain rooted to the foot of the Premiership, still looking for their first league win of the season.

There was a hectic opening to the game as both sides attempted to gain the upper hand without creating any meaningful opportunities.

Saints took the lead with the first real chance of the game.

Andy Considine played a ball from inside his own half in behind the United defence with May running clear. He advanced on goal before calmly firing high past home goalkeeper Carljohan Eriksson.

The Tangerines finally carved out a chance of their own in the 24th minute when Jamie McGrath swung a corner in from the right and Steven Fletcher sent a powerful header towards goal but May was on hand to clear off his own line.

United were struggling to make much of an impression on St Johnstone and tempers boiled over just after the half-hour mark with United’s Aziz Behich and Saints’ Drey Wright booked once the dust had settled.

The home side should have tested Remi Matthews when McGrath hit a pinpoint free-kick into the Saints box but Ryan Edwards headed over.

Instead, it was Callum Davidson’s men who extended their advantage in the 39th minute. May burst down the right before cutting the ball back low for Hallberg to sweep home past the helpless Eriksson.

Saints came close to a third just before the break but Wright’s low drive flew just past Eriksson’s right-hand post.

United toiled manfully to claw their way back into the game at the start of the second half but Saints continued to look comfortable.

The Perth men came agonisingly close to making it three in the 57th minute when May struck a dipping shot from just outside the box which hit the home crossbar.

Matthews made a vital stop in the 80th minute, keeping out a Watt effort at his near post.

However, United finally scored three minutes later. Matthews initially saved a Behich shot but Watt was on hand to fire home the rebound but it was too little, too late for the Tangerines.

What the managers said…

“We worked on things all week and I thought tactically we were really good. I don’t really like mentioning players and singling players out but I thought Stevie May was outstanding today.

“First of all, I thought his work-rate was tremendous. He scores the goal, creates a goal and clears one off the line.

“He could have had another second half and that’s what I want to see from Stevie. We know he’s got that in him and we believe in Stevie.

“I think his performance was outstanding and typified the result in the end and how we got there.

“The last few minutes were a bit nervy but I thought we had managed to control it in the second half enough not to give away too many chances.

“We could have done better at the start of the second half but then we had chances on the counter to make my life easier. But, ultimately, I’m delighted.”

“Disappointed, really disappointed. It’s always difficult when you come in 2-0 down at half-time. The goals we conceded were poor. A few individual errors gave us a mountain to climb.

“The league table probably tells us that’s why we’re sitting there, individual errors. The first goal especially is one ball over the top. We’ve plenty to work on and improve on quickly. That’s the plan.

“We will let the dust settle, we’ll look at the game and be as positive as we can with the players.

“I thought we actually started okay. I would like us to be a bit more ruthless with shots at goal, more crosses in the box, give the fans something to cheer about and hopefully bring them with us.”