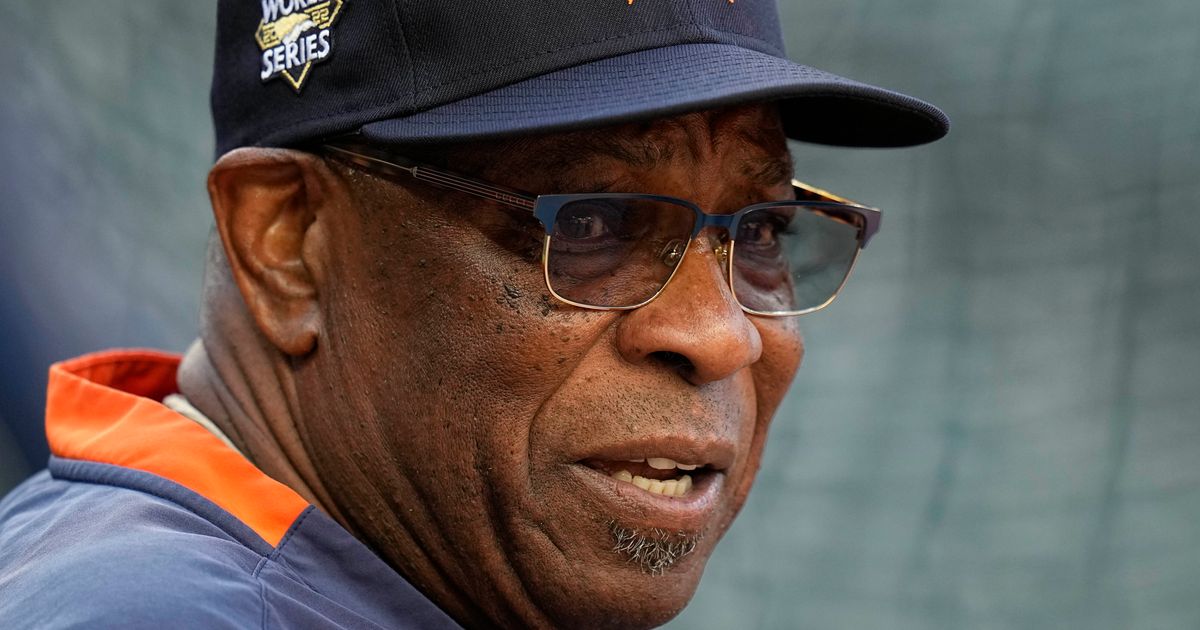 HOUSTON (AP) — Dusty Baker grew up watching Black stars shine in the World Series, paving his path to a life devoted to baseball.

When he leads the Houston Astros in Game 1 of the World Series against the Philadelphia Phillies on Friday night, the AL and NL champions will play without any U.S.-born Black players for the first time since 1950, shortly after Jackie Robinson broke the Major League Baseball color barrier.

It’s a fact that deeply disturbs the 73-year-old Baker, one of two Black MLB managers, who has spent his entire life either playing or coaching baseball.

“What hurts is that I don’t know how much hope that it gives some of the young African-American kids,” Baker told The Associated Press on Thursday. “Because when I was their age, I had a bunch of guys, (Willie) Mays, (Hank) Aaron, Frank Robinson, Tommy Davis — my hero — Maury Wills, all these guys. We need to do something before we lose them.”

Jackie Robinson debuted in 1947 with the Brooklyn Dodgers and played in the World Series that year. Since then, the 1950 matchup between the New York Yankees and Phillies has been the only World Series without a U.S.-born Black player.

Houston and Philadelphia announced their 26-man rosters several hours before Game 1 on Friday night at Minute Maid Park, and neither had a U.S.-born Black player on it. Both rosters have players of color from the Caribbean, Central and South America.

Michael Brantley, a Black outfielder for Houston, is out for the season because of a shoulder injury.

“I don’t think that that’s something that baseball should really be proud of,” said Baker, who won a World Series as an outfielder with the Dodgers in 1981 and is seeking his first championship as a manager. “It looks bad. It lets people know that it didn’t take a year or even a decade to get to this point.”

Indeed, the dwindling number of Black MLB players has been an issue for years. Richard Lapchick, director of The Institute for Diversity and Ethics in Sport at Central Florida is the lead author for his group’s annual reports on diversity hiring practices in sports. He said that Black players made up just 7.2% of opening day roster this year, the lowest percentage since study data was first collected in 1991, when 18% of MLB players were Black.

Starting in 1954, when Mays and the New York Giants played against Larry Doby and Cleveland, every single team to reach the World Series had at least one U.S.-born Black player until the 2005 Astros did not.

The Phillies had no Black players on their opening roster this year for the first time since 1959. Roman Quinn, a Black backup outfielder, played 23 games before being released.

Philadelphia power-hitting rookie Darick Hall made his debut in late June and played 41 games — his mother is white and his father is Black and white, and he identifies as multiracial. Hall wasn’t on the Phillies’ roster for any of the first three rounds this postseason and isn’t expected to be on the World Series roster.

Last summer, for the first time in MLB draft history, four of the first five players selected were Black.

While “very disappointed and discouraged” with the situation this year, Baker hopes the makeup of the top of the most recent draft means this will be the last World Series where U.S.-born Black players aren’t represented.

“There is help on the way,” he said. “You can tell by the number of African-American number one draft choices. The academies are producing players. So hopefully in the near future we won’t have to talk about this anymore or even be in this situation.”