Economic meltdown drives some Lebanese to collect recyclables for a living 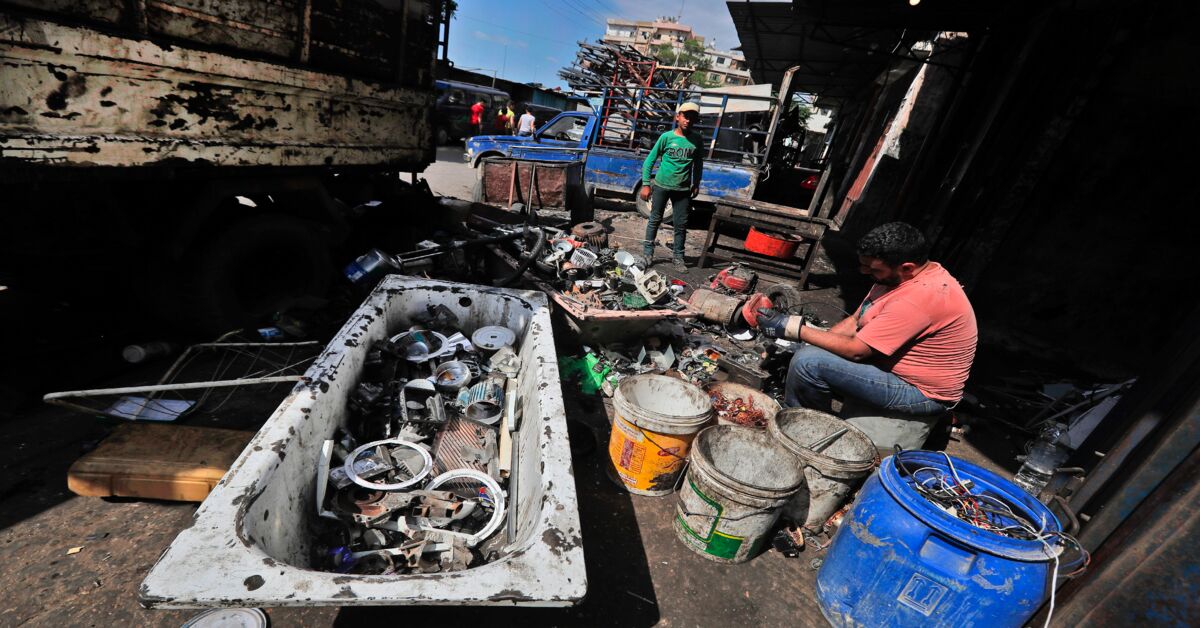 Since the economic crisis began in Lebanon in 2019, collecting plastic, cardboard, iron and anything suitable for recycling and remanufacturing has become a common profession in areas like Tripoli, Bekaa, Saida and Beirut.

Inflated prices of imported materials mean that manufacturers and buyers are constantly looking for raw materials on the domestic market, as it saves them dollars since they do not have to pay for imported goods that are priced under the black market rate. This allows them to raise their profits as products sold in the domestic market are cheaper than imported products that often require payments in cash dollars.

Some environmental experts say this can enhance sustainability in the production process and promote a circular economy while helping some people earn an income.Â

Environmental consultant and engineer Tamara Ghanem told Al-Monitor, â€œThis rising trend is basically trash for cash and is helping those in poverty who are desperate to earn something.â€

Ghanem added that although some people have become more conscious about recycling, this trend itself is not sufficient enough to drive recycling on a national scale â€” it does mean, though, that people now value recyclable items more.Â

Previous calls and campaigns in Lebanon have been organized by the Ministry of Environment and many environmental associations that promote the importance of recycling. But the recycling of waste really kicked in with the onset of the economic collapse.Â

Prior to the economic collapse and the loss of value in Lebanese currency, $1 equaled 1,507 Lebanese lira. With the instability of the exchange rate, $1 recently reached 33,000 Lebanese lira, leading to soaring prices and demand for fresh cash dollars.

Dozens of unemployed elderly and young men have been forced to turn into scrap collectors, riding their carts from one waste container to another in the early morning hours on the streets of Lebanon looking for recyclable items to sell.Â

Al-Monitor spoke to one scrap collector, Maher Harb, who was laid off from his job in a butchery. â€œI canâ€™t feed my family if I donâ€™t earn some money, even if it is very little and worthless compared to the expensive prices of everything in the market.â€

Harb is forced to wake up at 6 a.m. and wander from one street to another in Beirut to dig up waste containers and look for what he calls â€œtreasureâ€ for the poor and unemployed.Â

Small manufacturers have also benefited from this recycling, as they now purchase the materials used for packaging at cheaper prices.

Ahmad Yassin, who works as a sales representative for cleaning products in Bekaa, told Al-Monitor, â€œI buy plastic gallons and bottles from collectors and fill them up with the liquid and detergents at a factory in Kamed Al Lawz after they go through the steaming and repackaging process, and this saves me and the manufacturer money from buying brand-new gallons.â€

Recycling for money has even become more common in households that in the past barely questioned the value of recyclable items and instead threw everything away.Â

Mona Al Hajj, known to her family and neighbors for her recycling efforts, told Al-Monitor, â€œBefore the dollar crisis hit the country, the majority of people I know used to mock me for recycling things like juice glass bottles, takeaway plastic containers and plastic gallons. But now they have become so expensive on the market, and their prices are continuously rising.â€Â

Hajj is now using the recycled items to store her â€œmouneh,” or preserved foods, with glass bottles being used to store tomato paste, plastic gallons for vinegar, and plastic containers for dried herbs and fruits.Â

Recycling items in Lebanese households and the appearance of scrap collectors is undoubtedly beneficial for the environment as well and can help to alleviate Lebanon’s waste crisis by raising awareness on the importance of recycling.Â

Although scrap collectors have benefited from reselling recyclable waste in a country that has minimal employment opportunities, environmental and sustainability experts told Al-Monitor about the unpleasant side of this emerging trend.

Environmental engineer Ziad Abishaker told Al-Monitor, â€œSometimes these scrap collectors create a mess more than they assist the streets of Lebanon, as they only look for recyclable waste they can profit on while digging up waste containers and leaving them in disarray.â€Â

Recyclable waste collectors in Lebanon mainly benefit from scrap yards or waste dumps where they hunt for items like appliances, wires and plastic materials.Â

Outside of scrap yards, these collectors mainly look for plastic bottles and gallons as, according to Abishaker, one kilo of plastic sells for 2,000 to 4,000 Lebanese lira.Â

For experts like Abishakir, this form of collecting recyclables has the main advantage of helping those desperate for financial aid.Â

People in Lebanon are traditionally already familiar with implementing key waste management and circular economy principles, as older generations used to apply these methods without being aware of the benefits and their links to recycling.Â

Many families in villages collected milk tanks and used them as plant pots; others commercialized the collection of metal and steel decades ago for resale.Â But again, this emerging trend of collecting recyclable waste from dumps or waste containers has mainly made its appearance in the shadow of the economic crisis.Â

TRUE adviserÂ Majd FayyadÂ told Al-Monitor, â€œDespite the benefits of removing scrap from the streets and creating income for some unemployed people, this approach cannot be considered as a solution to our crisis, especially due to its fragmented and uncoordinated nature.â€Â

Fayyad said those recycling scrap material for cash can raise awareness on recycling in local communities, as people become aware that desperate citizens are eeking out a living off of recycling these materials.

Lebanon’s waste crisis is the result of poor institutional capacity, corrupt political efforts and the lack of a long-term vision.Â The untreated waste crisis and the burning of waste at more than 150 dumps across the country have had a significant impact on the lives and health of nearby residents.Â